Fifty years ago tomorrow afternoon (Australian time) Yuri Gagarin was blasted into a single-orbit flight around the Earth, becoming the first human into space. 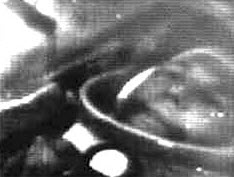 Fifty years ago tomorrow afternoon (Australian time) Yuri Gagarin (above) was blasted into a single-orbit flight around the Earth, becoming the first human to fly beyond  the aerodynamic limits of the atmosphere and enter space,  experiencing prolonged weightlessness in the confines of his Vostok 1 capsule.

It was a tumultuous event, comparable in shock to the loss of technological leadership that came with the October 4, 1957 launch by the Soviet Union of Sputnik 1, the first artificial satellite.

In Australia, just past high noon in the golden age of the Menzies era,  the news was in plenty of time for the front page of the first editions of the daily papers, but would have struggled to make today’s print editions, which lock up hours sooner than was the case 50 years earlier.

Yet in the Soviet Union the successful outcome of the flight took some time to confirm even after the orbiter was tracked re-entering the atmosphere in the final minutes of its 108-minute trip.

At 9.07am the mysterious chief designer (identified many years later as Sergei Korolev) radioed Gagarin that all the motors were alight on lift-off, and the 27-year-old excitedly yelled over the roar of rockets from within his capsule “Off we go.”

Within minutes he felt the release of multi G-force acceleration give way to weightlessness, and witnessed, from a place no human had ever been before, the white and brown vastness of Siberia roll away beneath him as the capsule began a diagonal crossing the Pacific from Kamchatka to sudden nightfall near the tip of South America.

After the retro rockets broke his velocity over Africa he became the centre of a fireball as re-entry buffeted the tight fitting confines of Vostok 1. No one had ever gone from 18,000 miles an hour (almost 29,000 kilometres per hour) to a few hundred miles an hour in only a few incandescent minutes either before that day.

While it was mathematically certain the flight had ended and the trajectory toward the Russian Steppes had been observed from the ground, the outcome remained uncertain for some time.

After a thunderous re-entry over the wheatfields near Engel, it took Gagarin 10 minutes longer than Vostok 1 to reach the ground after a parachute ejection at 7000 metres, after which he asked a stunned farmer and his daughter for directions to a public telephone so he could call Moscow.

Back then this reporter was just the pictorial reporter, writing block lines or captions on the 5pm-1am shift with occasional banishment to suburban court reporting, but attending university lectures as early as 10am,  barely a year after the SMH lifted the requirement for male reporters to wear hats.

That night was one of those old-fashioned newspaper nights when everyone knew this was, suddenly, one of the major mid 20th century stories, and that they, we, were writing the headlines, the opinion pieces, even the block lines,  for history not fish wrappers.  People hung around for their copies off the presses before the trucks that took out the country editions at 11pm.

The preoccupation of space stories in 1961 was all about the “Red threat” and implications for the arms race, and the security of Australia, and they were written by foreign affairs editors and international correspondents, not science reporters.

The jet age was for Australia and the West, less than three years old.  In 1961 came during the final transition of the economy, and social values, from the postwar era.

It was, peculiarly, a time of more obvious change and change tension, than 2011, but then there was a lot that needed changing too.

The big stories in Australia the year manned space flight began included the sale of oral contraceptives and a collapse in condom sales, the banning of the DH Lawrence novel Lady Chatterley’s Lover at a time when book banning was normal in Australia, the jailing of Stephen Bradley for the kidnapping murder of Graeme Thorne a year earlier,  the near disappearance of Australian maritime shipping,  Richmond failing to score a goal in a VFL game (which hadn’t happened to any club since 1922), and the disastrous crash of an Ansett ANA Vickers Viscount into Botany Bay (courtesy Wikipedia and the 1961 Australian Government Year Book).

The only Australian space-related story of note was the opening of “the dish”, the Parkes Radio Telescope, which no one could have guessed would be the first point of relay for the moon landing pictures starting from Apollo 11 in 1969 and the Giotto images of the nucleus of Halley’s Comet in 1986.

Australians had money, in fact coins made out of real silver, in their pockets, and were learning to spend.  The most dangerous way to earn a bob after school was to crowd trams and bus stops, sometimes jumping on and off them, to sell afternoon newspapers in a society where driving to work remained a minority transport mode.

Yet even though car ownership was small, and even home telephones were less than common, Sydney and Melbourne were visibly filthy with smog in times before pollution laws began to clean up cars, trucks and manufacturing (not that manufacturing had with hindsight much life left in it).

The greatest engineering project in Australia, the Snowy Mountain scheme,  was nearing its culmination, but high rise hadn’t really come to the cities. In Canberra the only sign Lake Burley Griffin was ever going to fill was the desultory construction of the Kings Avenue Bridge, which opened later that year, three years before the waters rose beneath it.

As is always the case, history comes in ambush for those who made predictions about how manned space flight would lead to missions to Mars by the mid-’80s, and the first expeditions to the stars about now.

Who could have foreseen in 1961 that by April 12, 2011,  the US would be about to lose its capacity to launch people into space, relying instead of on a scaled-up version of the original Vostok craft to service the International Space Station on the retirement of the space shuttles, and that the USSR, like its handsome space hero, would be long gone (Gagarin died in a plane crash in 1968).

Alpha Centauri, and even the red planet, must wait a little longer. The Yuri Gagarin monument in Moscow.

It’s hard to remember a time when we’ve had such an avalanche of shocking scandals damaging the top echelons of government and the corporate elite in such a short space of time.

Congratulations, Ben. A nicely constructed and well written article.
I had no Idea of this anniversary. Wonder if it gets much press in the former Soviet Union?

I heard on Radio National that the Ruskies make quite a fuss over this glorious achievement of the motherland: they recognise the anniversary every year and Yuri Gagarin is well recognised as a hero.

After the flight the USSR apparently wouldn’t let Gagarin attempt any more dangerous activities so he led a tame life for several years. Eventually he was allowed to fly again and he crashed his training jet in bad weather. As is often the case, Wikipedia has an informative entry on him.