That Australians are being cautious with their finances was shown again this morning.

Frugal Australians. That Australians are being cautious with their finances was shown again this morning with Australian Bureau of Statistics figures for personal lending finance continuing the downward trend evident since last October. 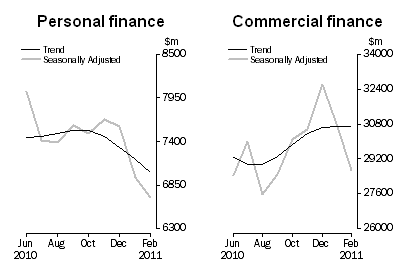 Commercial financial commitments for the month also declined suggesting that any economic recovery is at a modest rather than rapid pace.

More primaries on the way. An interesting cryptic comment by retired Liberal Defence Minister Peter Reith the other night about changes he might recommend in a review he is conducting into the last election for his old party.

Having been questioned about the reluctance of the defence brass to really investigate charges of sexual impropriety (and supporting Stephen Smith’s anger at inaction), the topic was briefly changed and Mr Reith singled out the result in the NSW State seat of Tamworth as being worthy of attention.

The above average swing there followed the use by the Nationals of a primary ballot to choose its candidate.

Are the ADFA lot really any different to other university students? It appears that we are to have some kind of official inquiry into whether something rotten about the culture of the military forces has been revealed by the distressing case of the Australian Defence Force Academy webcam incident. Perhaps a starting point would be to enquire whether this kind of behaviour is actually unique to ADFA. I expect, unfortunately, that it is a common enough feature of university life elsewhere as well but just does not get reported.

The survival of the dictator. Muammar al-Gaddafi keeps having on in there and no early departure is expected. The Crikey Libyan Dictator Indicator has his removal by the end of April as only an eight percent chance.

The market odds about him being turfed out by the end of the year are rated a much greater chance at 68% but that is well down on the 90% figure back in early March. 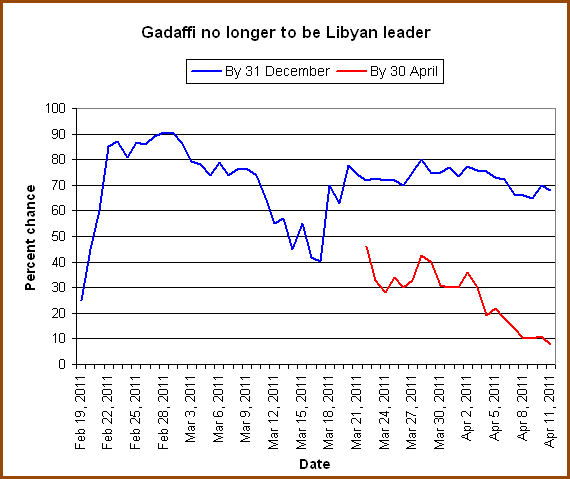 The Indicator figures are based on the Intrade prediction market,

I expect, unfortunately, that it is a common enough feature of university life elsewhere as well but just does not get reported.

I expect it’s a “common enough” feature of young people’s (<25 or so) lives in general these days – nothing specific to Universities (other than the relatively high concentration of them in one place). Due in no small part, I'm going to posit, to the proliferation of camera phones and the expectation of hanging their whole life out to see on facebook, twitter, et al.

DRSMITHY – point taken about not being confined to universities