The well over 120 people on the call (including me) should be nominated for a long-service medal — it was an excruciating experience for those who hung on.

The media is all about confidence — from producers, reporters, researchers up to sales people and senior management, everyone is selling something, whether it’s on the front page, in a private meeting, an interview, getting a big ad contract, snatching a killer story or winning a new job. That confidence was missing from Lachlan Murdoch’s performance yesterday.

The industry is full of articulate, talented CEOs and charlatans. If you last long enough in this business, you see them all. From the likes of Steve Cosser, who used to run Ten — articulate, but in the end overconfident; to Sam Chisholm — a hard man but at times inspirational; to Grant Blackley, former Ten CEO — polished, good with a phrase, but found wanting by the board.

David Leckie, who ran Nine and runs Seven, is something of a raver, according to many in the media, but he gets results, can be inspirational and at the moment could sell ice to the Eskimos, such has been the strength of Seven’s start to the year. Michael Chaney (former Wesfarmer’s CEO) — smooth and intelligent; Roger Corbett,  former Woolies CEO — genial, but very tough. John Elliott — pick your description; Paul Anderson, former BHP Billiton CEO — a smart, strategic thinking manager.

Rupert Murdoch is a very polished performer, at times inspirational, other times, outrageous and with obvious self-interest. But not afraid, and on the whole very confident. Son James is the same (from video of a couple of speeches), with a “don’t mess with me” streak as well. Lachlan? Not so much.

But aside from the lacklustre performance, there was a particularly rotten assertion in the presentation.

On slide two of the document Murdoch asserted: 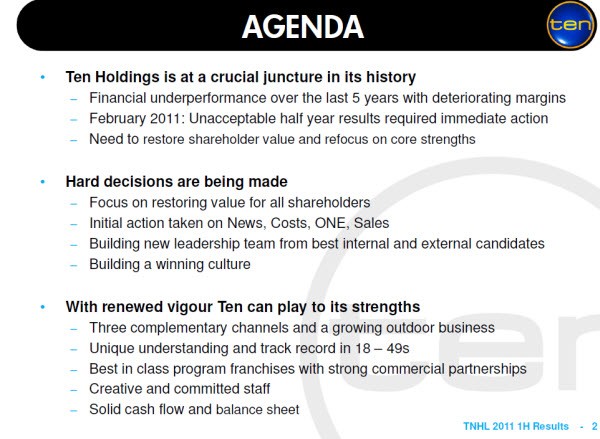 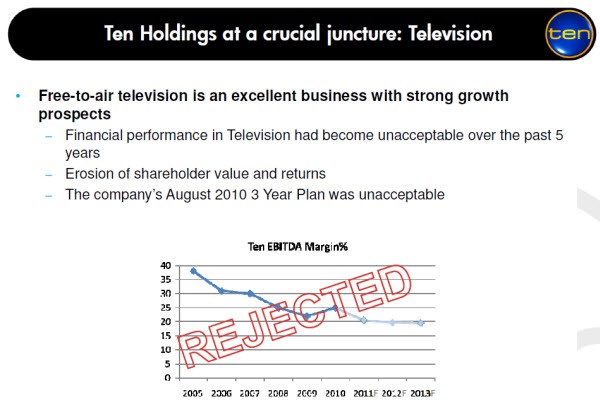 “Financial performance in television had become unacceptable over the past five years … Erosion of shareholder value and returns … The company’s August 2010 three-year plan was unacceptable.”

The last point is fair enough, that’s a call of the new shareholders, including the news and current affairs guru, Gina Rinehart.

But the first two comments are risible because they include the GFC, which damaged not only Ten, but Seven, Nine, Fairfax and News Corp’s papers and TV businesses.

Lachlan Murdoch makes no account for that (remember how TV earnings in the US for the group collapsed in 2008-09?). It’s just wrong to accuse (without naming) the former management of Ten of eroding shareholder returns over a period that included the biggest financial collapse since the Depression.

Finally, it is also hypocritical to accuse the former management of eroding shareholders returns and values when Murdoch sat on the News Corp board and supported not only the high-priced purchase of the Dow Jones Company and The Wall Street Journal for about $US6 billion by his father (just as the GFC was breaking across financial markets in 2007) , but then agreed within a year to impairment charges on the same deal of $US3 billion, or 50%.

Murdoch welcomed Andrew Bolt and the new program called The Bolt Report (how modest) to Ten on Sunday mornings. Now Bolt is approaching his 51st birthday (in September), which puts him outside Ten’s target demos of 16 to 39 and 18 to 49.

Murdoch didn’t attempt to resolve the conflict between the out-of-demographic Andrew Bolt with this description of the Ten he wants to see: “Bold, confident, irreverent, a young brand”.

By tacking on Meet The Press at 10.30am, Ten is attempting to give Bolt’s program some credibility with the political classes who watch these Sunday morning chat programs. But having feasted over on the ABC, will they hang around for more for another hour? Isn’t that why the PVR/video recorder was invented, to give you a Sunday off?

Great courage Glen Dyer, calling realities by their right names!
The problem with the formulae ‘find the person singing our song and let him call himself the song writer ‘ is that while it adds to masturbatory pleasure it misses the lucrative power hit when the audience is searching for reality gems and the fictitious find themselves as digested pressed woodchips stamped with black ‘pages of fiction’.
Trust me I am a famous Samogitian, Tarvydas.
All rights and Copyright claimed.