And the Wankley goes to… Hun heartbreak over grieving swan

Rupert Murdoch, it's said, believes putting animals on the front page sell more papers. Grieving animals? You can take that to the bank.

Rupert Murdoch, it’s said, believes putting animals on the front page sells more papers. Grieving animals? Well, you can just about take that to the bank … 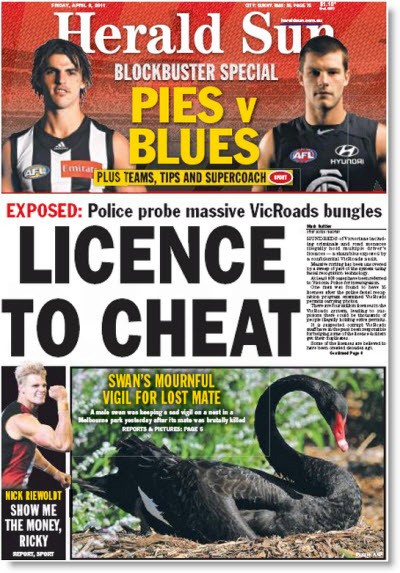 A nation mourns with this black swan, after his mate was murdered by, to quote various newspapers of the land, a “stupid”, “callous”, “senseless”, “abhorrent”, “appalling”, “horrible” stoning by teenage thugs at a park in Melbourne on Wednesday. Media far and wide has been captivated; the story has topped the pops on news websites in Melbourne and abroad.

On an island in a city oasis, a black swan jerks his majestic neck around at every sharp sound.

Now and then he prods the nest below him with his beak. Sometimes he stands, stretches, turns around and settles back down.

A couple of times during the day he has taken to the water, but only quickly, not long enough to feed himself.

He had to get back to the mound and the clutch of eggs. They are his world now. Since Wednesday afternoon, they are all he has …

Brown saw grief in the great bird’s eyes. A far cry from happier days, apparently captured by an AAP photographer, where the proud pair gracefully paraded the Queens Park lake. A file photo of the happy couple — or at least two swans that looked similar… A heartbroken Hun demands vengeance (the ABC reported that police were questioning four youths as Crikey hit deadline) — its editorial page today spoke for its readers:

Bullying and animal cruelty are closely linked and no one who saw a woman cradling the dying swan in her arms can be anything but heartbroken over this cowardly act, as are Herald Sun readers.

Four boys and three girls were seen running away after throwing stones. They should own up to what they have done.

But that won’t bring back what one swan has lost. We are all that lone black swan. His vigil is our vigil. He holds all our hopes, writes Brown:

Wildlife authorities hope the swan can hatch the brood.

They say it’s late for a hatching and should come soon. They hope. Everybody hopes.

We’re pro-swan here at Crikey. We deplore swan violence. But for laying it on so cloyingly thick, the Herald Sun earns a deserved Wankley.

Yes, overdone, but hopefully the shame will stop the perpetrators from doing it again, and also any others who might be tempted. Although my cynical nature makes me doubt it.

The silver Swan, who living had no Note,
when Death approached, unlocked her silent throat.
Leaning her breast upon the reedy shore,
thus sang her first and last, and sang no more:
“Farewell, all joys! O Death, come close mine eyes!
“More Geese than Swans now live, more Fools than Wise.”

Imagine how many eulogies the Herald Sun would have to write if it commented on each native bird killed by a cat owned by one of its readers?

Crikey might be pro-Swan, but I note that Crikey is also pro-cat. Domestic cats are estimated to kill 100 million native animals per year. Feral cats kill 480 million. Crikey’s pro-environment credentials are undermined by publishing photos of cute little pussy cats with all the attactive alertness of a lethal killer about to strike. I am not too sure about the merits of using Crikey to promote the Cat Protection Society of NSW either.