So the Immigration Department is going to spend $15 million doing up some wooden sheds in Tasmania to house 400 boat people for 26 weeks until permanent accommodation is available back on the mainland.

Put them up at Wrest Point. So the Immigration Department is going to spend $15 million doing up some wooden sheds in Tasmania to house 400 boat people for 26 weeks until permanent accommodation is available back on the mainland. That’s a cost of $1400 per person per week before the cost of guards and something to eat and the provision of some heat to ward off Pontville’s winter cold. Absolute madness.

Kevin eleven. The man is not going to go away and Tony Abbott must be thankful for that. Kevin Rudd was out and about in Queensland yesterday with his travelling diplomats show spectacularly upstaging Julia Gillard’s sympathy tour to flood victims. And the Prime Minister seems powerless to do anything about it. The way things are shaping up the Gillard-Rudd rivalry will be as big a problem at the next election as it was at the last.

Strange alliances are possible in politics. Who would have thought a decade ago that the conservative German Christian Democratic Union would be seriously talking about the possibility of a future coalition government with the country’s Greens? Yet that is what is now being speculated about as Der Spiegel explains in a story this week headlined “Merkel’s Party in Need of New Allies“.

The retreat by Chancellor Angela Merkel’s CDU from support for nuclear power is apparently bringing the traditional rivals closer together as this interview with the German Environment Minister and Merkel’s potential successor makes clear:

SPIEGEL: Does the planned phase-out of nuclear energy offer the CDU an opportunity to once again consider a political alliance with the Green Party?

Röttgen: The first task at hand is to make a course correction, which is what we are doing within the coalition with the FDP.

SPIEGEL: But aren’t the Greens a better fit for a new anti-nuclear CDU?

Röttgen: The CDU should be as strong as possible, and it should have as many coalition options as possible as a result.

SPIEGEL: The chancellor has called a national coalition pairing the CDU with the Greens a “pipe dream.”

Röttgen: That was a remark made in connection with a specific political situation. I have long been convinced that placing the CDU in a particular political camp is outdated in terms of voting patterns and would not be in our interest.

SPIEGEL: Would a CDU-Green coalition in Rhineland-Palatinate, a state which voted in March, be desirable?

Röttgen: Absolutely. I think it would be a terrible signal if the Greens were to contribute to keeping the clannish regime of (the Social Democratic governor of Rhineland-Palatinate) Kurt Beck in office for another five years.

It is a development that Australia’s Labor Party should keep in mind before Prime Minister Gillard goes too much further in her efforts to belittle Bob Brown’s team.

Learning to play the opinion poll game. Now that they have cast off enough of their purity to accept donations from business, the Greens are able to play the game of political campaigning on more equal terms to the major parties. The latest example is the use of that wonderful standby the opinion poll to get a little extra publicity.

The Greens commissioned a poll of 1036 people by Galaxy on the question of the carbon tax and, surprise, surprise, it shows strong support for the model being negotiated by the Gillard government, the Greens and independent MPs.

French literary jokes. There’s a new game in town for the literary minded French after a junior government minister got a little mixed up while trying to display his intellectual prowess at a function marking Political Book Day. The junior trade minister Frédéric Lefebvre was asked what work had most made an impression on him among all those he had read. “Without doubt Zadig et Voltaire,” he replied. “It is a lesson about life and I dip into it often.” Not too often, it would appear, for the book is simply Zadig while Zadig et Voltaire is a prominent French clothing brand. 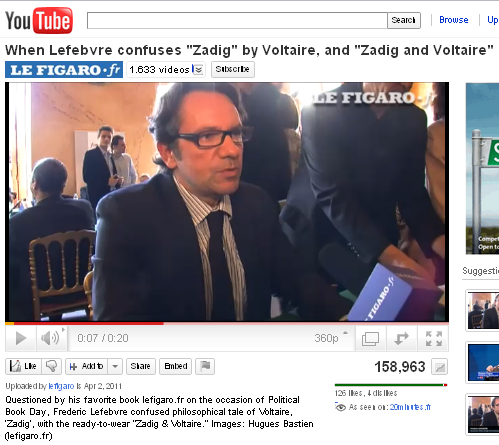 Competition soon began on Twitter (at # bibliolefebvre ) to find other successful marriages between literary references and brand names. Some suggestions — roughly translated from the French:

“The elegance of Ericsson (Barbery)

“Capital” of  Marks and Spencer

“In the afternoon an iPhone” Mallarme

“The World According to Gap,” John Irving

“The Iliad and the eau d’Issey” Miyake

“The killer lives in the 21 Century”

Reckon “Murdoch” is going to pass up a chance to wedge their “Labor Opposition” on this “leadership battle”, to high-light instability – while their “Can-Do-Man” is drawing flak, elsewhere?