One reader was looking at an article on betting advertisements at sporting venues at the Daily Telegraph and decided to vote in their reader poll. Why are the answers so dodgy? Plus other media news.

Dodgy graphs. I was reading this article on betting advertisements at sporting venues at The Daily Telegraph and I decided to vote in their reader poll — and was amazed at the difference between the visual graph and the actual votes… 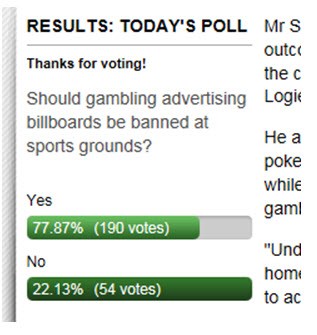 Front page of the day. The latest News of the World front page had a story about Kate Middleton being bullied. Today’s Guardian is a little different: “Scotland Yard’s inquiry into allegations of phone hacking by the News of the World took a dramatic turn on Tuesday as the paper’s chief reporter, Neville Thurlbeck, and its former assistant editor Ian Edmondson were arrested on suspicion of conspiring to intercept mobile phone messages.” — The Guardian

“The Guardian was named Newspaper of the Year at this year’s Press Awards, with specific recognition given to its coverage of the “huge” WikiLeaks story.” — Journalism.co.uk

“At the 2011 Clinton Global Initiative University (CGI U), President Bill Clinton announced that MTV and the College Board, with support from the Bill & Melinda Gates Foundation, will develop a first of its kind social media tool to help students find money for college.” — Social Times

“The Center for Public Integrity will start a new Web site this month dedicated to investigative journalism. The Web site, called iWatch News, will be updated daily with 10 to 12 original investigative pieces and aggregated content from other sources.” — The New York Times

No one cares who reads the news

“The explosion of news choices on cable and the Web have made the evening news an anachronism enjoyed mostly by an audience of older and less highly educated viewers, according to the Project for Excellence in Journalism. If there is little prestige, honor, and future being the anchor of the No. 1 show chasing an audience that is becoming smaller, older, and is less-educated, imagine how the No. 3 anchor must have felt.” — Slate