What's a former Health Minister doing wearing a sponsor t-shirt with a KFC ad on it? Also, an early favourite for this week's Wankley and other political news.

Tony not listening to Paul Barry. “Australian public health experts contacted by Crikey say sports sponsorship by fast-food giants KFC and McDonald’s and the like should be banned. They also believe sports stars should be banned from endorsing foods that are unhealthily high in fat and sugar.” Thus wrote Paul Barry in the concluding article of Just Chew It, his recent Crikey series on the fast food industry.

Well, Tony Abbott, himself a former federal Health Minister, is clearly not so sure. 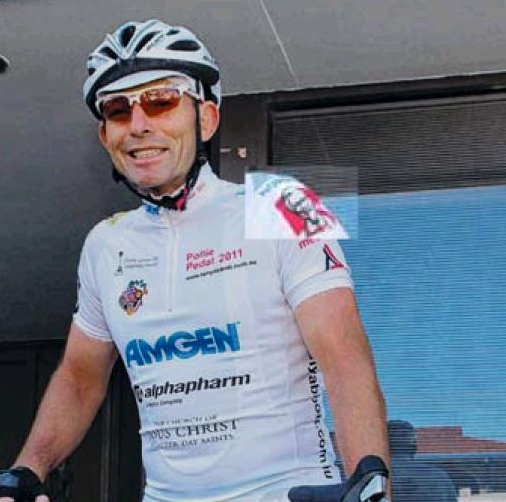 Back in 2006 launching an anti-obesity campaign for his Health Department, Mr Abbott had this to say:

I mean, what the government is doing today is putting some counter-images out there, if you like. For every image of someone wolfing down some KFC, there’ll now be an image of someone getting off the couch, and being active. So, we are in the business of trying to make sure that people get the right messages, as well as what might sometimes be the wrong messages.

Setting out yesterday on his annual Pollie Pedal charity fund raising tour he combined both messages in the one picture — the lycra clad exercise man advertising that very same KFC.

Award the Wankley now! It must be the early favourite for Crikey‘s weekly Wankley Award:

Page one of The Australian on Monday

”Common sense will prevail here – Easter egg hunts will go right ahead, as they always do.

”The regulations do not ban any cultural activities. As is already the case in government schools, they are simply focused on making sure that children are not made to feel uncomfortable because they are forced to participate in cultural traditions that are not their own.

”Similarly, the suggestion that any childcare worker would be fined $50,000 for sending a child to the naughty corner is ridiculous and plain wrong.

”The draft regulations do outline provisions which protect children from inappropriate forms of punishment while giving carers scope to impose discipline if required.”

– Childcare Minister, Kate Ellis, in dismissing  fears that under proposed national regulations childcare workers could be fined for sending children to the ”naughty corner” or for celebrating Christmas and Easter as ”ridiculous”.

The price of popular uprisings. Those of us to have lived as adults during the years of the Whitlam government get a little uneasy when we see crude oil prices rising. The inflationary pressures of an oil price shock are not easy to handle, so the overnight price passing through the $US120 a barrel mark should be bringing some frowns to Wayne Swan’s forehead. Clearly the political uncertainty in the Middle East and north Africa has a price that every nation in the world must pay.

This morning’s trade figures from the Australian Bureau of Statistics show that in February there was a 26% gain in fuels and lubricants imports that contributed substantially to the trade balance moving into deficit for the first time in almost a year. Despite the strength of the Aussie dollar there is going to be worse news in the figures for March and beyond.

A quote for the day: A column well worth reading.

In modern Australia there are no Hitlers and no Stalins. These days the only real political violence is found in the abuse of language. This is best treated by a reading of history.

Wow. The War on Appropriated Pagan Festivals and Crappy Chocolate.

If News didn’t exist, it would be necessary to invent it.

I’m surprised your writer didn’t also notice the advertiser’s logo at the bottom of Mr Abbott’s shirt. It looks to me like “The Church of Jesus Christ of Latter Day Saints – that is, the Mormons! Wow – when Tony talks about his following as a ‘broad church’, he really means it!

So now Tony is a advert board for Drugs , God and Fast food . A Bad mix.