One motoring journalist says its not just good fortune, but good engineering from Mitsubishi, that saved a woman whose car fell six storeys. Also, front page of the day and other media news.

Interesting angle or free plug? While most media outlets attributed the “extraordinary” survival of a 41-year-old woman who drove her car off a six storey car park in Melbourne’s CBD yesterday to the airbag, seatbelt and luck, Herald Sun writer Paul Gover — “Australia’s top motoring journalist” — decided to turn his focus elsewhere.

“Good luck. And RISE” are to be thanked for the woman’s survival, reported Gover.

The Mitsubishi Outlander, the car involved in the incident, was the first vehicle to be sold in Australia with Mitsubishi’s Reinforced Impact Safety Evolution (RISE) — which makes the car “more rigid and safer in a crash” explained Grover.

Despite claiming that the car “is nothing special on the safety front”, Grover did a great job of talking up the role RISE played in saving the woman’s life, calling upon Mitsubishi spokesperson Lenore Fletcher who said that the woman’s car may have had a RISE body cell.  — Melanie Mahony

Wrong headline ABC. A tragic tale of a baby that was assaulted by his babysitter became even worse yesterday, when the ABC reported the court case saying the baby had been killed. 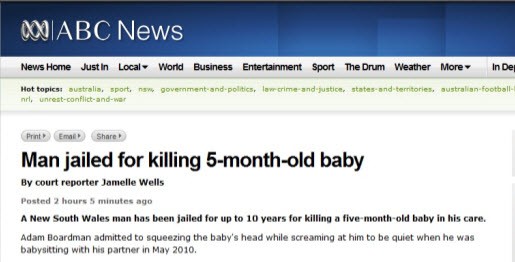 And another unfortunate headline...This time from Ireland’s Sunday Business Post (courtesy of Reddit), the story is online too: Front page of the day. Haunting image on UK’s The Independent. New weekday editor for The Age

“The Age has appointed a new editor, Michael Van Niekerk, as editor of its weekday newspapers.” — The Australian

“Steven J. Law, the president of Crossroads GPS, a well-financed conservative political group with ties to Karl Rove, had a revelation a few months ago while watching television news. “WikiLeaks suddenly became a household name,” he said, and he thought, “Amid all of this bad behavior, there is a certain genius going on there.

“Last week, in an attempt to tap into that genius, Crossroads began Wikicountability.org, a collaborative Web site intended to create a database of freedom of information requests that scrutinize the actions of the Obama administration.” — New York Times

“With about 19 months to go until the 2012 presidential election, President Obama launched his reelection campaign with a YouTube video, an email blast and targeted texts Monday.” — Mashable

An F for education reporting

“Despite our digitally obsessed age, the most common source Americans use for their education info — after family and friends — is the traditional news media.” — Huffington Post