Controversial right wing columnist Andrew Bolt has quit his decade-long, $800-a-pop gig on ABCTV's Insiders, apparently to focus on other projects. Plus, more on The Mercury subeditors and other media news.

Bolt’s not an Insider anymore. Controversial right-wing columnist Andrew Bolt has quit his decade-long, $800-a-pop gig on ABC TV’s Insiders, apparently to focus on other projects. During yesterday’s taping, Bolt delivered a coded farewell to his ABC viewers: “It’s nearly 10 years that we’ve been on air and I’ve come to really appreciate and rely on the support I’ve got. I love ABC viewers, thank you very much.”

A spokesperson for the ABC confirmed the departure this morning, but remained mum on the polemicist’s plans for the future. However, Crikey understands that Bolt, a regular panellist on Ten’s news-based pith program The 7PM Project, could be looking to substantially expand his on-air remit with Lachlan Murdoch’s mob. A Ten spokesperson didn’t respond by deadline; watch this space. — Andrew Crook

More tidbits from subs desk. Crikey’s report on Friday about the loss of subeditors at The Mercury possibly being added to the subbing Mega Desk in Melbourne reminded me of a story I grabbed from a local (Mornington Peninsula) Leader paper recently, containing the sort of howler that turns up regularly in these journals. 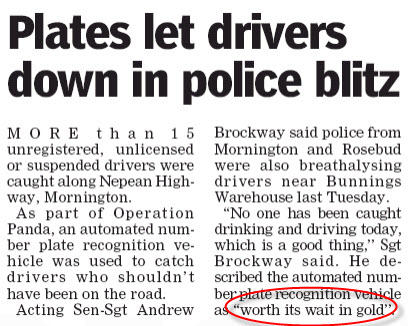 Here is another, from another Leader paper, in fairness possibly published before the Mega Muckup table was established. Such howlers are not new. They amuse at one level, but as a journalist heading for half a century in practice, they depress me deeply because they are coming from a new stratum of ignorance. Proprietors and their acolytes don’t appear to give a stuff about the words, except those outside the borders of what they dismiss as the editorial hole – that journalistic black hole into which they resent seeing their profits pouring, a wound to be stanched by any and every means. Including getting rid of people who actually know and care about their product, their communities and their craft, such as The Mercury subs.

As I understand it, Mega Muckup desk occupants are required to take stories from the top of the queue; stories destined for the Herald Sun or Leader or whatever. Don’t ask questions, just sub the stuff, and if you don’t know the difference between “weight” and “wait”, or whether it’s Hampton Street or Hampton Road, who the hell cares? Certainly not the board, which laments loss of readership at AGMs but can’t see the connection between reader desertion and their pig ignorance, arrogance and uninterest in what newspapers are actually supposed to do — report the news, write the features, and get it right. — anonymous Crikey reader “Golden Logie for the Most Popular Personality on Australian Television has less to do with ratings and more to do with Oscar-style campaigns over networks’ media platforms. Even 2010′s most popular television show MasterChef is not sure to win Most Popular Reality Program.” — TV Tonight

“The more media companies ask consumers to pay for digital content, the more brands are stepping in to foot the bill. And while consumers and marketers seem to love the arrangement, it could cut into the pool of advertising dollars and does nothing to wean consumers off the idea that content is always free.” — Ad Age

The Atlantic filters The NY Times

“Now that the New York Times pay wall is live, you only get 20 free clicks a month. For those worried about hitting their limit, we’re taking a look through the paper each morning to find the stories that can make your clicks count.” — The Atlantic Wire

“Hilariously, David Flint and the ACM have shown themselves up to be perhaps the biggest April Fools in Australia’s history by falling hook, line and sinker for an obvious prank by the UK’s The Guardian newspaper.” — Independent Australia

How computers make us richer

“$1,700: The annual benefit the average American derives from personal computers. Despite all the wrenching change the computer age has brought, humanity is probably better off than it would have been if the PC had never been invented.” — The Wall Street Journal

Game over for Daily Sport

“The Daily Sport and Sunday Sport will not be published this weekend and face closure, after their parent company ceased trading on Friday and called in administrators.” — The Guardian