A striking set of numbers in New South Wales

A week after the massacre, and the New South Wales election is wrapping up. The last doubtful seat in the lower house was decided on Friday, when the Greens claimed victory in Balmain — comfortably from the Liberals on preferences, but by just 205 votes ahead of Labor at the critical point. (They will almost […]

A week after the massacre, and the New South Wales election is wrapping up. The last doubtful seat in the lower house was decided on Friday, when the Greens claimed victory in Balmain — comfortably from the Liberals on preferences, but by just 205 votes ahead of Labor at the critical point. (They will almost certainly also win the last seat in the upper house, ahead of Pauline Hanson.)

The Greens had 10.3% for their one seat, the Christian Democrats were well back on 3.1% and independents are down to just three seats, although the total independent vote increased slightly to 8.8%.

Some of the superlatives are already familiar, but they’re worth repeating anyway. Every seat swung against Labor, the large majority of them by double digits. The smallest swing was 4.7% in Pittwater, where Labor’s primary vote actually increased a little — but since it started on 7.4% that wasn’t a huge achievement.

Again, preferences made almost no difference to the result: only in Balmain was the leader on primary votes overtaken on preferences. If preferencing was compulsory rather than optional, it’s possible that Greens preferences would have saved Labor in East Hills and Oatley, the two closest Liberal wins, but it would have been touch and go.

Although the increase in the Greens vote was only modest — up 1.3% from 2007 — as a proportion of the left’s vote it has jumped enormously: last time there were more than four Labor voters for every Greens voter, but now there are less than two and a half. Right across Sydney’s northern suburbs the Greens have, at least temporarily, replaced Labor as the second party.

The Nationals to some extent are in the reverse position: their position in the Coalition is weakened by the magnitude of the Liberal gains.

Before the 2007 election they were able to talk (albeit implausibly) about replacing the Liberals as the senior partner, but now they are more reliant than ever on Liberal goodwill.

Electorally the Nationals had some good results, winning back three seats from independents and gaining a 36.6% swing (one of the two largest in the state, with Penrith) to take Bathurst. Remarkably enough, they won all but two of the seats they contested, missing out only on Cessnock and Northern Tablelands.

But overall the average swing to the Nationals was at least 3% less than that to the Liberals. Cessnock, where Labor started on a 12.4% margin, should have been a win, and in Monaro, the other gain from Labor, they only just fell across the line. That performance may well make the Liberals push a bit harder next time the Coalition agreement is being discussed.

Such an unusual pattern of results makes it tricky to construct two-party-preferred figures, but Antony Green has done a valiant job to produce a new pendulum. It shows that all but 16 of the new government’s seats have margins greater than 10%, whereas only three of Labor’s are that safe. Despite its depleted numbers, Labor has just as many very marginal seats (under 3%) as the Coalition does.

The statewide swing against Labor was of the order of 16%, for a two-party-preferred total close to 64%-36%. It was a good election for the opinion polls, which — despite widespread disbelief — had been consistently tipping results in that neighborhood for some months.

The state is now in uncharted waters; no one really knows how hard it is for a party to recover from this sort of shellacking. Big comebacks certainly do happen — witness Labor in South Australia in 1997. But the pendulum doesn’t swing just of its own accord, and a beaten party can sometimes fail completely to recover ground — for example the Liberals in NSW just eight years ago.

Which will be the better guide to Labor’s fortunes in 2015? Stay tuned. 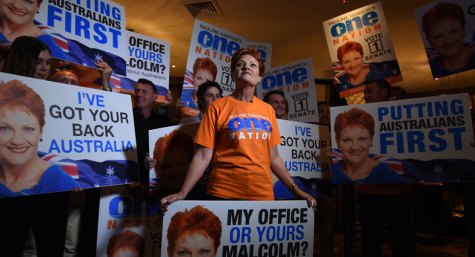 WOuld have done better if Labor had won zero seats. That way they could start out fresh.

I was very glad of the extent of the loss the ALP sufferred. It was well earned.
Having got the bad taste out of the mouth …. it would be good if they managed to win enough seats next time to have a big enough talent pool to keep the other side (ie my side honest).

My experience in the last 23 years of ALP rule in QLD (barring two years under Nats) has taught what can go wrong if there is no reasonable opposition to keep you honest.

Monopolies are not good for consumers when it comes to politics