A story from scraps … readers get Fooled …

In the wake of a tragic school stabbing this week, The Courier Mail continues the fine tradition of journalistic verballing, managing to turn the non-committal remarks of a bureaucrat into a story. Plus, other media news.

How to make a story out of scraps. In the wake of a tragic school stabbing this week, The Courier Mail continues the fine tradition of journalistic verballing, managing to turn the non-committal remarks of a bureaucrat into a story that strongly suggests the Queensland government is considering bag searches for the state’s schools. It is a classic technique, drawn from the “When Did You Stop Beating Your Wife” school of journalism… 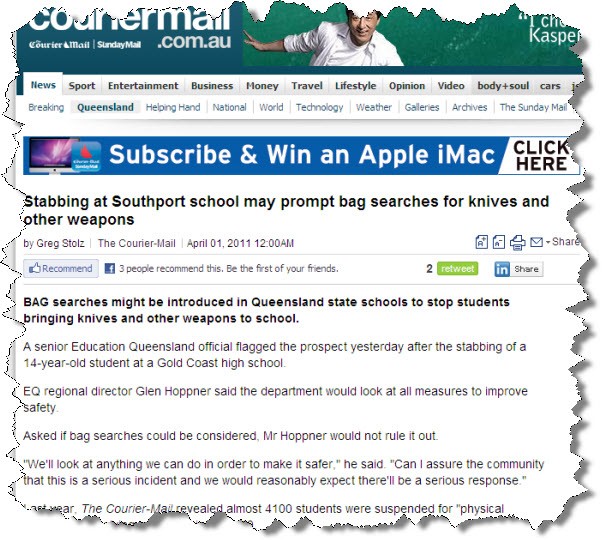 Was the Fin playing the fool? An empty gap where a headline was supposed to be on the front cover of the Australian Financial Review this morning. Later editions corrected the error… 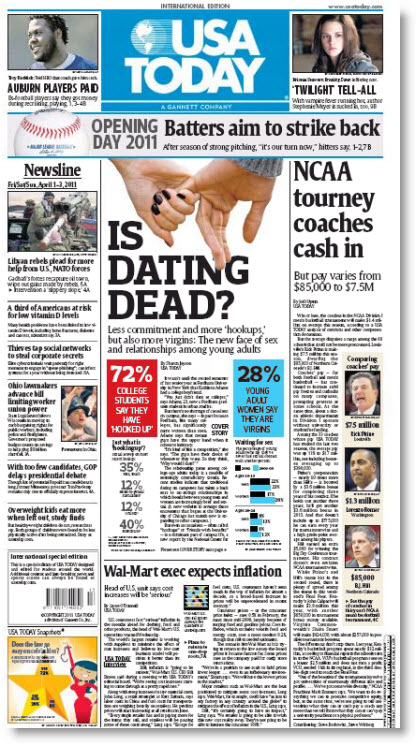 The best of the media’s April Fools jokes

“As an annual service, Mumbrella rounds up some topical news stories and ads for April 1.” — Mumbrella

“How many subscriptions to The Daily, News Corp.’s iPad-only multimedia newspaper, have been sold since the expiration of the free trial period last week?” — Forbes

Why are some lives more worthy of media attention than others?

“From the dawn of newspapers, murder has been a major component of the news agenda. It is unsurprising. In civilised society, the killing by one human being of another human being is an appalling act. It is the crime of crimes.” — London Evening Standard

“Academy Award-winning actress Gwyneth Paltrow has been remaking herself in recent years as a food expert with strong ties to celebrity chef Mario Batali — and now, according to a reliable source, she is trying to expand her empire outside of the Hollywood realm with a magazine project.” — NY Post

“My friend Tony Barrell, who has died at the age of 70 in Sydney, had one of the most interesting, eclectic and original minds it’s ever been my privilege to encounter.” — The Drum