ABC colleagues are said to be devastated this morning by the death of Tony Barrell. Crikey can understand why. For his dedication to intelligent and independent thought, and the generous way in which he shared it, we will also miss him.

Dear Colleagues, I am writing to you all with some terrible news. Last night our colleague and friend Tony Barrell passed away. He apparently had a heart attack. He was 70.

Tony retired from the ABC in 2008, but continued to be a regular contributor to Radio National’s feature and documentary programs; many programs drew upon his knowledge of Japan and the Japanese nuclear power program in the days following the reactor crisis in that country.

Tony was without doubt a great original, and his contribution to the ABC has been extraordinary, as a journalist, as documentary maker in both radio & TV, as producer of  wonderfully creative and entertaining radio features, and as writer and producer of drama. He worked across many areas of the ABC, from 2JJ, to TV, to Radio National. It is hard, off the bat and with little time for reflection to do justice to the breadth of his achievement and the scope of his restless curiosity. His Wikipedia entry at least summarises his huge range — radio maker, film maker, writer. My God, the man was talented: http://en.wikipedia.org/wiki/Tony_Barrell_(broadcaster)

I know that many of you have been touched by Tony as a colleague, friend, mentor. He was an iconoclast who relished irritating ABC management, a lover of life, a maker of jam. His intense and restless curiosity about the world and about people is reflected in his work — a dozen or so programs and at least two books about Japan, a film in the works about the Greek Islands, documentaries from Siberia and Spain and everywhere in between, years on JJ with the Nippi Rock Shop (with his friend Rick Tanaka), a special coming up on Into The Music about the late Captain Beefheart, great docos on his much loved Sydney Swans, a radio essay on the perils of cheese, and four part series on rice. The list of subjects and places and ideas goes on: UFOs, the number 3, cities, migration, time, trauma, Hart Crane ….

He was wickedly funny, deeply serious, highly intelligent, wilful, generous, and for all of that self effacing and kind.

Yesterday morning he presented a master class on his work to a gathering of radio drama and feature producers, including a new generation of freelancers. As always, his teaching was incisive, generous, funny — and the breadth of his work dazzling, clearly underpinned by a deep thoughtfulness about the stories he told and how he told them.

At the end of the session, someone described him as the “punk pope” of the radio feature. It was hard to believe he was 70. Harder to still think that in a few hours he would be gone.

He leaves a remarkable legacy. He was much loved. He will be much missed.

There will be other more informed notices from people who knew him far better than I did, and I will pass on whatever information I receive about funeral arrangements and the like. In the coming week or so, there will an opportunity to hear a selection of his work on 360documentaries and our other documentary programs.

Please feel free to contact me if you want to, and do talk with your friends and colleagues about this remarkable man who has left us far too early.

Barrell was a long-time Crikey contributor, commenter and welcome agitator. Last year he wrote compelling from Greece on its economic and political turmoil — and olives…

China the ship of splendour on the Greek horizon

Last week a bomb went off in a government building in Athens. The ironies were deep and painful. The target was the Minister for the Protection of the Citizenry, one Michalis Chrysochoidis, who shares the building with one of Greece’s top secret intelligence agencies. It was a simple but powerful parcel bomb that was sent through the post. It was delivered incorrectly and sat on a desk in an adjacent building for two days, without being either X-rayed or sniffed by dogs. It went off when a 52-year-old government clerk opened it (working late at 8.30pm) and killed him instantly. No one knows who sent it yet, but doubtless an anarchist group will soon fess up to the outrage.

Greece needs more than a little bit of help from the gods on Olympos to defeat the much more determined inflation hawks now running (or maybe ruining) Europe’s “recovery”. It’s a tricky one. Is Greece a basket case dragging the entire community down, or just the worst case of a general problem? Or are the bastards using the crisis as an excuse to cuts swathes through the public sector?

Letter from Greece: life not travelling too well … unless you have olives, sheep and can fish

There are many useful Greek words we can’t live without – crisis, chaos, catastrophe, anarchy, hubris – but one of the most valuable but rarely used is entropy, the word for the inevitable decay of all things (i.e. one day the sun will go out). Tourism is the third biggest export earner for Greece, but this year has been, well almost, a catastrophe and in June I sensed in my corner of paradise, the north-west coast of the large Aegean island of Lesbos, that the locals were in entropic retreat, that because nobody was around, they were reverting to their old ways: shops were closing for the afternoon siesta as they did when I first visited here in the early 1970s.

And in 2009, Barrell brought some perspective to a debate on magazine photo manipulation…

Photography and political manipulation. The New York Times’ David Kennerley’s whinge about the political manipulation by Newsweek of his shot of Dick Cheney with a kitchen knife in his hand looks ridiculous when compared with this 1933 effort by German photo-montage artist-activist John Heartfield. Born Herzfelt, he Anglicised his name as a protest against anti-British propaganda during WW1. A cut-and-paste job on the jolly fat family man Hermann Goering. 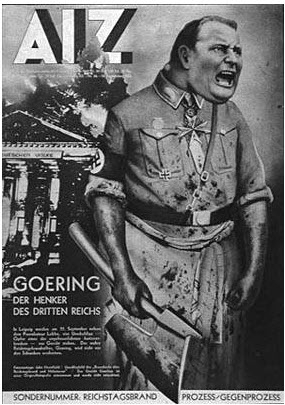 Needless to say he had to leave Germany not long after this appeared in the communist magazine AIZ.

As part of a special tenth birthday round up of our most loyal readers, we once asked Barrell why he felt the need to email Crikey whenever the term “latte sipper” was used in an edition. He replied, thoughtfully:

ABC colleagues are said to be devastated this morning. We can understand why. For his dedication to intelligent and independent thought, and the generous way in which he shared it, we will miss him. Our thoughts are with those he is survived by, including wife Jane and daughter Klio.

Radio innovator, stirrer, Renaissance man… unpretentious, passionate, curious and true. And an avid bus rider! Tony, you’ve gone far too soon, but your legacy will inspire. I use it to reach the radio makers of the future. You’ll be with us in every creative doc/feature that stirs the heart, tickles the intellect and connects the community. Good memories of your parents Reg and Anne at the Riv – you came from decent, compassionate folk, and it showed.

No, please someone say this is some kind of a bad joke. I cannot take it.
We were working on a several more articles on Fukushima and the nukes in Japan, were pondering some new ventures, and above all, were looking forward to seeing each other again in flesh in Oz.
Only a couple of days ago, he faxed me a reference so that I can get my reentry visa sorted to get back to the Ozland. And you tell me now that he’s gone? You must be kidding.
Tears are overflowing, as I reflect all the good, bad and creative time we shared together over last thirty years, from the very first Nippi Rock Shop, to all those docos we made together, the trips we made together, the books we wrote together, the footy matches we went together, the shield matches we went together, all the lazy lunches we had together (to conspire next projects, of course), and many more.
You old bastard, I miss you.
rt

As a young fella,hearing Tony made me realise what could be done on radio,and he did a whole lot. Thank you ,Tony.

God, what a loss.
He and Graeme Bartlett kept JJJ alive for me at a time when I thought it had lost its imaginative, anarchic edge…
He also personally gave me ome advice which I seriously wish I’d taken. Sorry Tony, You were absolutely right about that prick, and you were also right that it wasn’t just because he was a footballer!
Huge condolences to Jane and Klio…

Tony Barrell was a lovely man and his and Graeme Bartlett’s Sunday Afternoon at the Movies graced and influenced my twenty something years..and onwards

This news is sad.