Stacking the shelves: home brand vs. ‘premium’, what’s the difference?

As the pricing war between Coles and Woolworths heats up, there are concerns the push toward home brand products could see consumers left with less choice in their trolley. In part three of an ongoing series, Crikey examines the rise of generics -- and market power.

A couple of years ago, Woolworths relaunched its basic Home Brand product range under the tagline ‘take it home with pride’. As part of the advertising blitz, it wanted to remove the stigma of home brand — behind the bland red and white exterior was a quality product as good as the big brands. In fact, the only reason home brand scans at such a low price, the ads seemed to say, was because they were wrapped in cheaper packaging than the fancy stuff.

Which raises an important question: what is the difference between private label products and their branded equivalents?

In short — especially when it comes to milk, eggs, bread and cheese — not that much. Many generics are made in the same factory as branded products by the same companies. Sometimes they are even the same recipe.

One industry source told Crikey he “didn’t think for a minute” there was any difference between the premium and generic milk: “How do you change the recipe? Add water? That would affect the fat content. They’re the same.”

Yet the price differential is significant. According to figures tabled by the Committee, home brand milk retails for around 60% of the cost of branded milk, despite it being almost an identical product. Home brand cheese averages out at 70% of the price of its branded equivalent, while bread can sometimes retail at 28% of the price of its “premium” brand rival.

A Coles spokesman confirms that in the case of some house brand products, such as milk and eggs, there’s often little difference between it and the branded product: “Customers are well aware of that and some actually have a preference for brands. There are other house brand products where there is more production involved, more product differentiation.”

The Senate Committee noted the perception there is a difference between home brand and branded milk allows the retailers to engage in price discrimination. It said in making a number of recommendations:

They were also concerned about the effect generic brand contracts are having on food companies like National Foods, which has to compete with its own product. One supply chain expert told Crikey it is often cheaper for manufacturers contracted to produce generic brands to simply reuse the premium product.

Crikey spoke to a manufacturer of orange juice contracted to produce generic products for the big three supermarkets. He explains juice is different to milk because there are so many different recipe types.

“The quality of some blends can be changed; it depends on what the retailers want and what they’re willing to pay for,” he said. “They may say ‘it needs to be this and it’s going to cost that’, well then we can downgrade the product.”

Demand for private label orange juice is “slowly increasing”, he says, partly due to the supermarkets discounting their house brand lines. Manufacturers are not wearing the cost of cheaper private label OJ just yet.

“Private lable [is] alright if you’re making enough volume, but you need to know what you’re getting into and try and minimise the risk,” he said. “You’re not going to make something for nothing and, when it comes to private label, you have to get a certain return otherwise it’s not worth it.”

In its 2008 report on grocery prices, the ACCC also heard evidence from suppliers which suggested, when it comes to milk, eggs, cheese and bread, there is no difference between home brand and branded products. The NSW Farmers Association reported private label and branded milk and eggs are “identical” to one another. And when it comes to milk, it said, the products often come from the same factory.

A Woolworths spokesman told Crikey the supermarket did not know whether its suppliers were using the same recipe for branded and generic products: “We have specifications in place for the manufacture of our private label products with our suppliers. We have no oversight over what the specifications of branded products might be.” 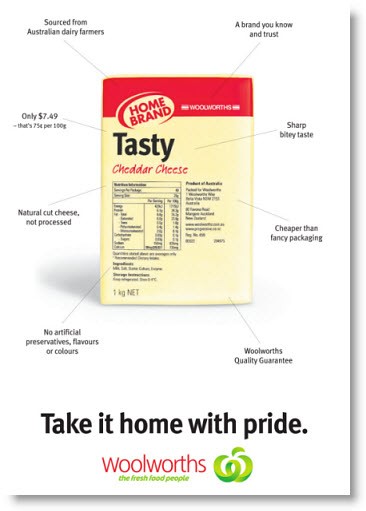 As Crikey reported on Monday, more shelf space is being allocated to home brand products. According to Nielsen, home brands represented 24.5% of supermarket sales last September, up from 19% in 2005. Coles has doubled its range of private label brand products in the last five years, while Woolworths has added about 600 home brand lines.

*Do you have a story about the differences between home brand and branded products? Send us an email or leave an anonymous comment.

Tom, you still haven’t made an argument that convinces me this is a worthwhile story. What’s the big deal? If it’s limiting choice, then how? If it’s taking money out of producer’s pockets, how much? Disappointing. I feel there’s a story here but it’s not being told.

It’s not supposed to convince you of anything.

That’s fair enough, Jason. I think it’s a really interesting topic and I certainly don’t only put value on articles with an agenda – I guess I just feel there’s more to be told and I’d really like to read it (without doing the research myself). Not trying to do your job, just consuming enthusiastically.

I’m yet to sympathise with the producers of branded products, be they Fosters or a bush cow cocky: all seem to have profited from products that are over priced, over marketed and some of which are over packaged.

Home Brand V Premium what is the difference? This is the question posed by Tom in this article.

On my Twitter account “myAUsupermarket” on the 3rd March I posted the following “I am a Tim Tam fanatic and delighted with Woolworths 3 for $4.98 this week, that is $1.66 per packet. Everyday shelf price is $3.05 Enjoy.” This incredible special has never appeared on a Coles catalogue. The standard Multi-Buy special on Tim Tams is 2 for $4. Why did Woolworths get such a great special?

Coles launched an excellent range of Chocolate Biscuits under the Coles brand. To encourage customer buy-in Coles had a full page in their catalogue promoting the biscuits at 3 for $5.

This is an example of the Premium brand Arnotts protecting their patch by going “head to head” with the Home brand Coles using it’s major competitor.

Some of our Premium brand products have become so strong that they control the price that we the customer must pay. The role of the Home Brand is to ensure that the customer can have an alternative product at a competitive price.