Unlike many of the people writing about the civil war in Libya, I have actually been through one of these breakups of a country.

Sell the rebels arms. Unlike many of the people writing about the civil war in Libya, I have actually been through one of these breakups of a country. Back in the early 1990s, having a son play soccer for the Croatia Deakin under 12s saw me end up in Zagreb as war was threatened with Serbia. It was a strange route but dedicated Australian Croats thought that an Australian who had run election campaigns with Bob Hawke’s team might be able to help their former countrymen deal with the vagaries of international opinion. So it was I found myself alongside Lyn Nofziger who had served as press secretary in Ronald Reagan’s administration as Governor of California, and as a White House advisor during the Richard Nixon administration and again during the Reagan presidency, who had been given the same job by Americans of Croat descent as I had.

Our task was to persuade the governments of the West that Croatian efforts to break away from the Yugoslav federation should be supported rather than opposed but Lyn was handicapped by an outbreak of cancer and, being unable to travel, deputed a former navy seal marksman named Pat Mackley to do the hands on work. Very hands on he proved to be too at a later time, but his skills as a sniper when holed down outside Vukovar are not the point of this reminiscence. The major task we faced was realising that we were on the team without weapons while the Serbs controlled all the hardware of the Yugoslav military forces.

My memory has faded after 20 years and I cannot recall the name of the village but the picture stays in my mind. We travelled out of Zagreb one day before hostilities really began to see the lay of the land and saw the Croatian rebel barricade manned by men with antique guns — some of them of a vintage pre-1900 — confronting the military might of modern tanks stationed in the nearby Yugoslav army barracks. It was clear that this was doing to be a David versus Goliath contest.

Yet the strange view of the United States and other Western nations was that there should be an arms embargo on the whole of Yugoslavia. The supposed opponents of communism were not prepared to allow the purchase of weapons by the Croatian “rebels”. The slaughter at Vukovar should be on their conscience! It is certainly indelibly imprinted on my memory.

Eventually the Croatians won the propaganda war (one of the proudest contributions of my political life) and, with the arms embargo forgotten if not lifted, the financial support of the Croatian diaspora redressed the military imbalance. Croatia won its independence.

I am reminded of this experience as I read how the United Nations has imposed an arms embargo on both sides of the conflict in Libya. The so-called rebels, even if they can find the money, are prevented from purchasing weapons and ammunition. This puts them at an enormous disadvantage compared with the government of Colonel Gaddafi.

At least the imposition of a no-fly zone has been extended to allow Western nations to destroy the aircraft and tanks of the Libyan Government. That’s an assistance the Croats never had, but an end to the arms sale embargo now is needed.

Peace is needed. As Liberals are to Nationals so Labor should be to the Greens. The alliance in both cases is a natural one. That Labor is putting at risk receiving Green second preferences at state and federal elections is just plain stupid. By all means have a contest in the handful of metropolitan seats where the Greens have a chance of winning but adopt the approach of the Coalition partners have had to three cornered contests for generations — may the best candidate win by taking the preferences of the second place getter.

The story that the Queensland Greens are contemplating not allocating preferences to any party in a state where, as in New South Wales, there is optional preferential voting shows the stupidity of Labor’s concern about losing one or two inner city seats. Make peace and make it now.

As safe as a bank. The Central Bank of Ireland has suspended trading in the shares of three of the country’s major banks until it releases the results of stress tests on the financial industry at the close of business on Thursday (Friday morning our time). Shares in the bancassurer Irish Life & Permanent, the Bank of Ireland and Allied Irish Banks are subject to the suspension. The Financial Times of London reports that brokers expect the central bank to identify a capital shortfall in the sector of between €15bn and €25bn, more than the €10bn originally earmarked by the EU and IMF, but less than the €35bn set aside as a contingency under the bail-out by the European Union and the IMF. 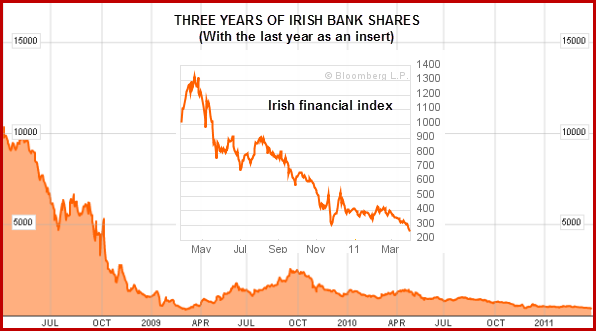 And not just the luck of the Irish. That continuing financial problems in Europe are not just confined to Ireland is illustrated by what is happening to the price the Irish and other governments must pay to borrow.

Portugal’s 10 year bond rate reached a new high this week and the Greek rate is on the rise again and not far short of its crippling record level just under 13%.

The International Herald Tribune this morning explained the extent of the problem facing the Euro zone countries. 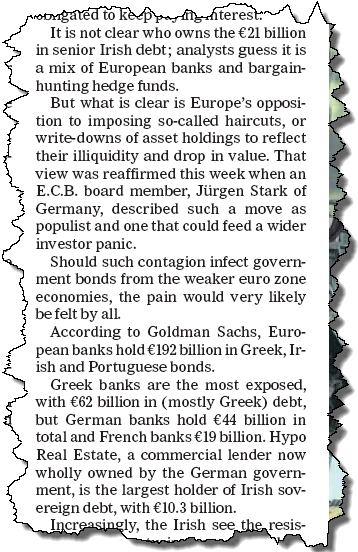 No housing pickup. Mums and dads had better stay used to having their adult kids around the house as there is no sign yet that the rate of new housing construction is picking up. Australian Bureau of Statistics figures out this morning show:

From Soviet scraps to backpack drones: the weapons of Libya’s rebels

The death of Gaddafi

Rundle: Libya endgame … why it’s important for one big win

With reference to “Sell the rebels arms.” it’s worth remembering that all the armaments being used against the ill equipped rebels were sold to Gadaffi by the NATO countries in the first place. A redress of the imbalance is certainly called for to avert a massacre.
It would also be nice to see the architect of the PanAm terrorist attack receiving his just desserts at last, particularly after the unsavory release of the actual murderer!

Labor needs all the help it can get – “pride”, the fact that someone else, besides “the boys in the back-room”, should be having input in policy is probably their greatest objection (of the boys in the back-room, running the party).
Pride going before a fall and all, to “stand on their principles”, with the way they’re perceived by the electorate? As long as a gnat doesn’t fart in their general direction, they’ll be safe.

Stephen Martin, if you want to talk about “just desserts” (sic) at least spell it correctly. Go on, look in the dictionary and understand what you are actually writing.
And if you want to watch a massacre take place then arm the rebels and sit back while Libyans slaughter each other – in the hundreds and thousands. Neither you nor anyone else has any idea who will ‘win’, what they will do with their win or whether we ain’t seen nothing yet on the terrorism front.

I agree that Labor should at lest settle a truce with the Greens. Apart from anything else, it would allow Labor to concentrate on its core supporters, whoever they may be: I suspect that Labor is finding it difficult to enunciate its core principles because its church has become too broad.

It seems to me your logic follows the lines represented at http://debatepedia.idebate.org/en/index.php/Argument:_US_has_strong_interests_in_arming_Libyan_rebels Even http://aangirfan.blogspot.com/2011/03/libyan-rebels-break-truce-invasion.html doesn’t touch on the component part of Libya in strategy to secure the Med as a U.S. ‘lake’ ; that’s http://aangirfan.blogspot.com/2011/03/us-control-of-mediterranean.html Note also the Aangirfan article on Libyan water – at risk from DU munitions.
Not that the UN Officials Uncertain of Who the Libyan Rebels Are
http://www.cbn.com/cbnnews/world/2011/March/Al-Qaeda–Identity-of-Libyan-Rebels-in-Question coverage mentions AdmiralMullen’s contribution to U.S. selling of overt belligerent action to a country which poses no threat and has not engaged in hostilities. It all rather sounds like
Masters of illusion tell deceiving tales
http://www.redress.cc/global/pjballes20091218