Jetstar pilots based in Perth were sent an email by their roster captain telling them to "toughen up Princesses" after they complained about fatigue.

Jetstar pilots based in Perth were sent an email by their roster captain telling them to “Toughen up princesses” after they complained about fatigue. 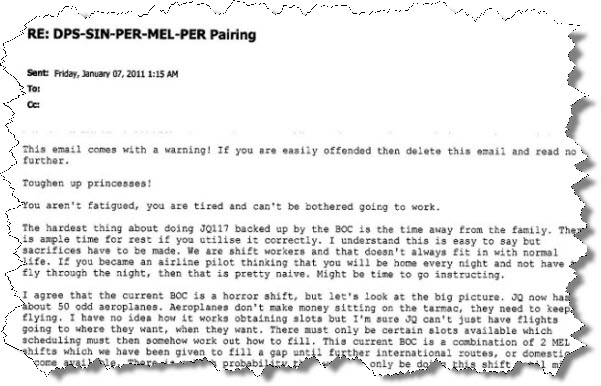 Senator Nick Xenophon tabled the email at the Senate inquiry into pilot training standards and airline safety saying it raised issues about the corporate culture and safety issues management in the low cost Qantas subsidiary.

The document (below) emphases the business needs of the “the big picture” for Jetstar to work its jets and pilots hard, but the captain (name deleted) also says he hated the back-of-clock shifts that left him unable to operate to his normal standard, yet not in his opinion fatigued.

The email’s tabling lead to a protest by Qantas CEO Alan Joyce, who said it was unfair to be confronted with something that should have been brought to Jetstar’s attention through the available channels and expect the airline to provide a response within a few minutes.

However, Senator Xenophon pointed out that the email was sent to all Perth-based pilots,  and that the committee had been contacted by Jetstar pilots unwilling to be publicly identified for fear of recriminations by management.

The public hearing began with another skirmish over an attempt by Jetstar Group CEO Bruce Buchanan to quote from correspondence from one of the pilots flying one of its A320s from Darwin last October when it was caught in a severe windshear down draught from a thunderstorm directly over the runway.

The committee members said they wanted the evidence in the correspondence first hand. Buchanan then said it was from one of the pilots on the jet who said that earlier committee testimony from Captain Richard Woodward, the industrial officer for the Australian and International Pilots Association,  “completely misrepresented” the incident, which the ATSB had chosen not to investigate without even speaking to either pilot.

At that earlier hearing, Woodward said the pilots told him they had expected to die as the jet was held close to the ground for 12 seconds at full take-off power.

Since then the ATSB has decided to investigate the incident. The chief commissioner of the independent safety investigator, Martin Dolan,  will give additional testimony to the committee later today.

Winging it: why is the competition watchdog allowing airline collusion?

Nick Xenophon should stick to pursuing issues relevant to the State he represents SA.

Jemshadow : so planes don’t fly over SA? I didn’t know that…

All Senators should stick to pursuing issues relevant to their respective states, but they don’t. Nearly all are involved in party politics, first and foremost, and rats to any potential disadvantage to the state they represent.

I get a fair few planes flying over my house as they head to Adelaide Airport. I’d certainly feel a lot safer knowing the ones coming from Perth are all wide awake and alert.

Don’t know how Xenophon can be involved in party politics…