Examining what a ‘survivor’ means

Examining what a ‘survivor’ means

Benjamin Lee writes: Re. “The 33-year-old LNP Holocaust survivor” (yesterday, item 10) As Keane wrote, “If Ban’s a Holocaust survivor, I’m a potato famine survivor.” Similarly, I should be entitled to say that I am a Japanese occupation survivor because my grandparents lived in Singapore and Malaysia during World War II. But I would never dream of claiming such a thing. I do not claim to know what it is like to be made to bow down to foreign invaders who look upon the people they have conquered as subhuman filth, fit only for enslavement by divine right. I therefore fail to see how Hajnal Ban can claim any credibility in comparing the use of a single word by the Prime Minister, in a legitimate political debate, to genocide.

It may be true that the glib dismissal of non-believers and sceptics of climate change as “deniers” is unhelpful in the context of free speech and civil, democratic discourse. However, it is hypocritical, as well as grossly offensive in its own right, to compare this to the deliberate extermination of millions of people. The climate change debate is a serious debate about the environmental and economic sustainability of our country and the planet. Ultimately, it is about saving lives and livelihoods. Linking climate change believers to the Holocaust not only cheapens this debate and lowers its tenor to Tea Party levels (“blood libel” anyone?); it prevents us from reaching a consensus on a way forward. But maybe this is what the Coalition and the Queensland LNP want.

The term “climate change denial” (and its derivative “climate change denier”) has been in use at least since 2007. Why are Ms Ban and her federal colleague Christopher Pyne only now attempting to portray the Prime Minister and supporters of the carbon tax as anti-Semites? This is far from a passionate defence against racial or religious intolerance. This is a calculated political attack, the amoral cynicism of which should taint Ms Ban, Mr Pyne and their ilk, and which dishonours the memory of the victims of one of history’s greatest crimes, and those who fought to stop it.

Barbara McGarity writes: Re. “Push for higher super contributions using women as stalking horse” (yesterday, item 9) Thanks, Crikey,  for this article about women and superannuation.

I have some questions:

Tanya Cumpston writes: Re. “Andrew Bolt on trial: ‘everyone makes mistakes’” (yesterday, item 3) There is more than one principle under the microscope here, but surely the most fundamental, the one from which we as a society must not retreat, is freedom of speech. The fact that it enjoys only limited protection in this country makes it all the more fragile, and in need of protection.

I sincerely hope that Bolt (for whom I hold a substantial degree of disdain), emerges from this ordeal uncensured and uncensored.

Frank Campbell writes: Absolutely right Mr. Keane. Shame though that your own Organ of Propaganda prohibits editorial space to critics of the Greatest Moral Challenge of our time.

(Except in the comment-slum of course)

Justin Larkin writes: Crikey‘s Bernard Keane “The extraordinary assault on Andrew Bolt and freedom of speech” (Tuesday, item 2) sought to defend Andrew Bolt’s right to free speech arguing that the test of our commitment to free speech was how far we will go to defend someone we don’t agree with and used Oliver Wendell Holmes ‘shouting fire in a theatre’ test.  Whilst I don’t seek to comment about the case itself I do take issue with several of Keane’s points.

Keane asserts that Bolt was merely offensive and that he did no actual harm. To say that is to ignore the damage wrought when the identity you hold as your own is questioned and denied by others.  It seems a straight-forward thing for me to understand the damage this causes when a person’s s-xual identity is questioned and repressed. Calling a straight but effeminate man ‘gay’ is considered so offensive as to be very hurtful. It is common for people to call boys ‘girls’ to denigrate them and question their male identity. We know this kind of bullying is damaging. These kinds of slurs cause actual harm. People subjected to this kind of abuse suffer emotional trauma and often go on to inflict physical harm on themselves or others.

To treat such comments as merely offensive is also to ignore the path of Australian history and the way identity was used by governments to such devastating effect.  If children were too white, they were removed. If you were too black your movements, voting rights and ability to marry were restricted.  It is difficult to over-estimate the devastation these policies and actions wrought and continue to wreak on Aborigines and completely unreasonable to assign the deliberate denial of an Aborigine’s aboriginality to the category of mere offense.

Secondly Keane falls into a common trap when seeking to define ‘genocide’ that it is always analogous to Hitler’s murderous reign.  It would be useful for more people to look to the UN definition of genocide.  Article 2 of the 1948 United Nations Convention on the Prevention and Punishment of the Crime of Genocide defines genocide as:

It is common to hear the tendentious argument that genocide only relates to crimes such as the holocaust.  The argument is convenient because it allows petty genocides to be excused with defences that amount to ‘well, I’m no Hitler’.  It would seem to me that Bolt’s statements fit the UN definition in that he sought to destroy a part of the group which call themselves Aborigines by establishing himself as the most qualified arbiter and transferring the (now adult) children of the group to another group.

Bolt has made a career out of denial. His denial of a group of Aborigines to identify themselves adds to generations of genocidal policies and actions that has led to Australian Aborigines having short, sicker, poorer lives than the rest of us. It seems to me that this is not just rudeness but real harm.

Marilyn Shepherd writes: Re. “East Timor solution dying the death of a thousand cuts” (yesterday, item 2) If the lazy dingbat media and politicians would shut up and think for a nanosecond about “regional processing” for refugees they would get to the point — there has been a system in place since 1954 and has 147 participating members.

We just refuse to call it by its name. The refugee convention. Remember it anyone? It means that signatory nations assess the claims of those asylum seekers in their own territory.

Gawd, if the media bothered for one second they would discover that the Bali process is nothing more than Australia being a bully with those countries who make refugees in the first place and that Australia is simply trying to shy away from our responsibilities.

If the refugee convention authors wanted one country to do the “processing” they would have said so instead of stating that one country could not so the global community must.

Sheesh, what does it take to stop this country being so embarrassing?

Anthony Davoren writes from Belgium: Re. “The weird world where Australians whinge about cheap beer” (March 24, item 10) Cost of living in Australia is staggeringly high. Several friends who returned have been shell-shocked. Some left again.

For us it will be hard to have to go without the quality of food we’ve enjoyed here [when we return]. Just on Sunday we were tucking into a NZ roast lamb leg ($7/kg), drinking a lovely Sancerre ($8/bottle) with delicious vegies (straight from our market) and finishing off with a Tarte Tatin a la banane (Bronny’s twist – Bananas at $1.50/kg) and coffee (fresh ground $9/kg). Mind you Belgium is much more expensive than its neighbours.

But the worst is we can’t just pop into the car and drive to another country. Come to that we can’t even buy a decent car in Oz without selling the house.

What about this poll from the Sydney Morning Herald? 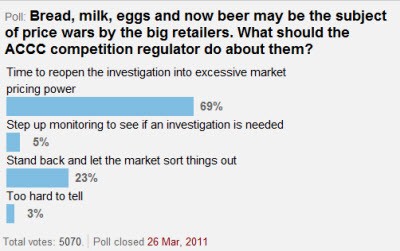 Are Australians really that stupid that they seek to stop competition between the big supermarkets ? What sort of lulu-lala country wants to pay more for things ? Where else in the world do they celebrate rising food prices, beer prices and house prices ?

Competition, bring it on. In the UK the supermarket competition is so intense that you can buy Australian products cheaper than in Oz. Competition is a good thing. You can buy a carton of Stella or Heineken or just about any other world brand for between $12-$20 per carton.

Beer price is the least of my worries.

With reference to the Bolt trial, I noticed the following quote:

“the polyglot nature of modern society rather than the reality of the race of the individual.”

It seems a bit odd that a journalist of Andrew Bolt’s standing is unaware that the word polyglot refers to a diversity of language and nothing to do with race.

Re: “In the UK the supermarket competition is so intense that you can buy Australian products cheaper than in Oz. Competition is a good thing.”

Coles and Woolies dominate the Australian marketplace in a way that would be regarded as scandalous in the UK.