There are still a few doubtful seats in the lower house in NSW. But attention has turned to the Legislative Council -- and Pauline Hanson is not done with yet.

There are still a few doubtful seats in the lower house in NSW (William Bowe has all the detail here) — but since there’s not really much practical difference between a 41-seat majority and a 49-seat majority (unless your seat is one of those in doubt), most of the remaining interest is focusing on the legislative council.

Even there, the key result is not in doubt: as I foreshadowed last Friday, the combined parties of the right will have a clear majority, with 23 and possibly 24 seats out of 42. But it’s that “possible” that’s interesting, since of course it would be independent and former One Nation leader Pauline Hanson.

Antony Green explained the situation in some detail on Monday evening, and although Hanson’s position has improved slightly since then (latest figures here) she will still find it difficult to pull off a win. She is currently 0.034 of a quota ahead of the third Greens candidate — about 5000 votes — but provided the Green stays ahead of the sixth Labor candidate, he will benefit from a small flow of Labor preferences, which should be enough to overtake Hanson.

At the moment that looks like a better bet for the Greens than their remaining chance of winning a legislative assembly seat, in Balmain). There they are still trailing Labor by 139 votes in the contest for second place: the Liberals will clearly top the poll, but preferences from Greens or Labor will be enough to elect whichever of them finishes second.

The Greens need to make up not just those 139 votes, but enough extra to outweigh the preferences of minor candidates that are likely to go against them. That’s possible, since the Greens usually do well on absentee votes, but at this stage it looks a fairly long shot.

So at best the Greens will have gained two seats, one in each house; at worst they will have stayed where they are. Their statewide lower house vote is currently 9.8%, a gain of 0.9% from 2007, but pre-polls and absentees might just nudge it up to 10%. Given that some opinion polls were putting it as high as 17%, that’s a disappointing result.

It’s worth asking, however, whether it’s bad enough to justify the doom-laden or gleeful (depending on one’s point of view) commentary in the media to the effect that the Greens are on the way out. By way of background, I’ve collated the Greens’ primary vote in the last five elections in each jurisdiction, summarised below (source: UWA elections database). 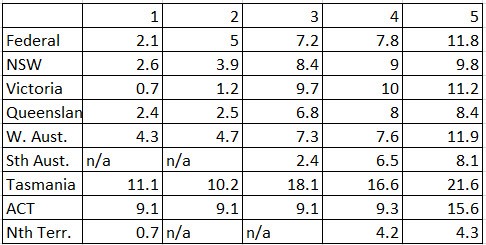 With the exception of two elections in Tasmania, their best state, the Greens vote has never declined anywhere in the whole period: a remarkable record. Nor is there any compelling evidence that the growth is slowing — witness the large jumps at their most recent outings in Western Australia, Tasmania, the ACT and federally.

But it remains true that the Greens, especially in the Past couple of years, have regularly fallen short of expectations. In both polls and pre-election commentary (and also, although less clearly, in the statements of some Greens) they have been tipped to win much higher totals and to gain seats that ultimately failed to materialise.

Now it may be said that if a party continually increases its vote but disappoints expectations, then that’s a problem for the pundits and pollsters, not for the party itself. But in politics the perception often is the reality; a party that is saddled with a perception of failure may easily find that it becomes self-fulfilling.

On the other hand, the narrowness of vision shown by both major parties, particularly at federal level, continues to leave plenty of space on the political spectrum for a third party to occupy if they are up to it. And the Greens only need to look around the world to see that they are part of a powerful movement: witness last weekend’s poll in Baden-Württemberg, where the Greens doubled their vote to 24.1% and are expected to lead a new coalition government, providing a state premier for the first time in German history.

There are few certainties in politics; the Greens may go on to bigger and better things, or their vote may plateau and decline. But reports of their imminent demise have been greatly exaggerated.

There is definitely plenty of space on the political spectrum for an alternative or alternatives to the major parties. At this stage, I think the NSW Greens are mainly preaching to the converted rather than reaching out to a larger audience. An example would be the proposed boycott of Israel and maybe even China. Most people would be either indifferent or opposed to this type of proposal and it really doesn’t help the Greens. I am surprised that it got through a consensus driven policy making process. There should have been enough opposition within the Greens to stop it if the Greens reflect more than a narrow base of voters.

Bllody hell. The new Green senators haven’t even got around to sitting, and people are predicting the demise of the party? It’s a bit premature.

I wouldn’t predict the demise of the Greens. It’s just a question of whether their vote remains around 10% (in NSW) or whether it increases.

I am becoming a one-note bore on this topic but once again an Australian election shows the unfairness of our electoral systems. When the only choice comes down to one party completely dysfunctional and the other (coalition) being partly dysfunctional (the Christian Right which at some point will certainly become a problem for BOF; without even mentioning the Nats!) but hiding it by revealing almost nothing meaningful about policy.
Nevertheless when voters are presented with this extreme polarization they can turn to the opposite party in desperation and not to the Greens, because of their perception to ensure removal of the current lot. This is why the Greens always perform less than pre-polls show. With a fair electoral system voters would not be faced with that kind of choice.
Of course there is also the lamentable fact that most voters do not pay attention and show up at the polling station and go, Doh, don’t want them (Labor) and what the heck do the Greens stand for? We pretty much get the politicians and government we deserve.