My paper Myer … presser of the day … Tele misuses poll …

The Herald Sun is celebrating the biggest, most important news of the day: a Myer store revamping. Plus, one company is angry the Daily Telegraph missed its poll and other media news of the day.

Today’s Herald Sun brought to you by Myer. Take a look at the front cover of the free Herald Sun being handed in Melbourne this morning: 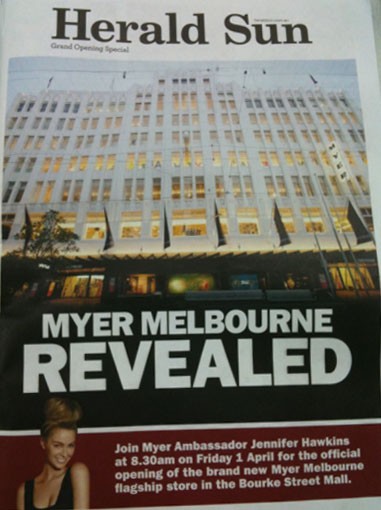 That’s right, it’s special front cover wraparound advertising the revamped Bourke St Myer store, with nary the word “advertorial” to be seen. According to a tipster “spruikers were doing their best to give away free copies of the Herald Sun this morning at Flinders Street Station. I believe the phrase ‘Melbourne’s Herald Sun — just for you!’ was being used as photographers stood close by getting shots of people grabbing a free newspaper.” Crikey counts a total of 24 ads for Myer in the paper, including 17 full pages (not including the wraparound). 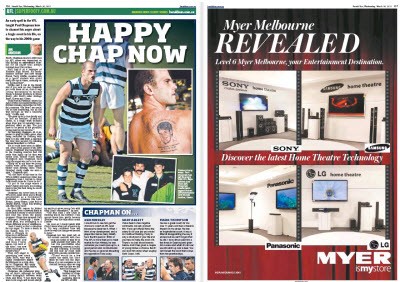 Now, to be fair, the majority of these ads are for other brands, which happened to be stocked at Myer and which have thoughtfully written across its ad something along the lines of “Bonds congratulates Myer on creating the ultimate shopping experience at Myer Melbourne”, with an “available at Myer” logo.

Not that The Age is immune. Just a few weeks ago The Sunday Age published a fluff piece where four Melbourne fashionistas had to pick which between David Jones and the renovated Myer as their favourite department stores. The opening lines read:

“It’s Friday afternoon and 21-year-old event manager and Melbourne ”It” girl Lili Romano is sipping coffee in a small but luxurious champagne bar surrounded by champagne bottles and designer clothing. She feels as if she could be anywhere in the world.

”I seriously felt like I was in another country. It was amazing,” she says.

Rather, she is on the first level of Myer’s refurbished Bourke Street store at The Salon by Louis Roederer — the champagne bar the retailer installed, along with two cafes, in a bid to create a sense of luxury and theatre — and to encourage customers into the store or to stay longer.”

But no Myer ads today in The Age, in fact barely a mention of the Myer reopening, apart from a few lines in Suzanne Carbone’s 3000 column. There was a double-page ad for David Jones though …

If the newspaper saturation isn’t enough for you, tune in to Channel Nine at 7pm tomorrow for Myer Celebrates, a half-hour prime time special with Eddie McGuire hosting the official “opening night”. Or tune into 3AW where Denis Walter will be broadcasting from Myer tomorrow and Friday. Wonder how much all this publicity has cost? — Amber Jamieson

Interesting press release of the day. Labor MP Chris Evans busts some myths about the Building the Education revolution in his latest press release:

Written advice received today from the Clerk of the Senate confirms the Government had no involvement in the timing of the release of a Committee report into the Primary Schools for the 21st Century Program on Friday night.

In articles published in The Australian on the weekend, the Government was accused of “dumping” the report “in the dead of night” and of “burial by release”.

The Australian further asserted that the circumstances in which the report was released “under the cover of darkness on Friday” were “extraordinary”.

Clerk of the Senate, Rosemary Laing, has today confirmed the tabling of the report was in line with standard and routine procedures of the Senate and was in no way influenced by the Government.

In a letter to the leader of the Government in the Senate, Senator Chris Evans, Ms Laing said the stories in The Australian “attribute motives to the Government and draw inferences which bear no relation to the facts”…

Tele misuses poll. The company whose data was used by the Daily Telegraph this morning to claim Coles has pushed up the price of petrol to offset huge discounts on milk says the data has been used incorrectly and the report is “horsesh-t”.

Informed Sources managing director Allen Cadd told SmartCompany this morning that while the data came from his company, the use of the data to create a graph that purports to show petrol prices spiking at the same time Coles was discounting certain products is misleading …

— Patrick Stafford (read the rest of this story at Smart Company)

Cover of the day. Libya versus the free world… 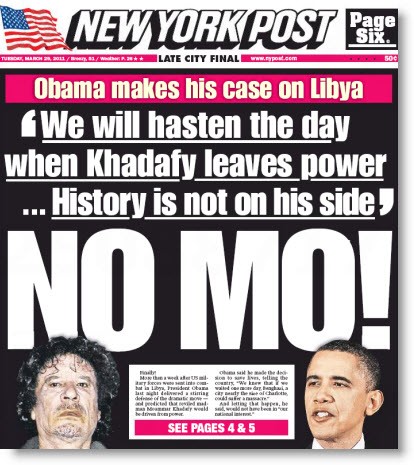 “The UK Guardian is on the verge of expanding its US footprint. ‘We will be announcing an American editor shortly,’ Alan Rusbridger, The Guardian‘s editor-in-chief, told The Cutline in an interview last week.” — Yahoo! News

Military gays: they can tell, so they’ll go to print

Looking at rehab? Check out the online reviews

“Addiction is a big business — and not just for the treatment centers that rake in billions of dollars every year… Now, Maer Roshan, the founder of Radar magazine, is betting that addiction is also a good and potentially profitable proposition for the Web.” — The New York Times

Mad Men will return — with a smaller agency

“Mad Men creator Matthew Weiner has been asked to cut six cast members from the AMC drama over the next three years — not just two actors, as has been previously reported … The individual also said Weiner was eager to get the show back on the air this year, and could do it if an agreement with AMC and production company Lionsgate comes soon.” — The Wrap