Today Tonight last night ran a suck piece on a rich horse race in Dubai and disclosed it was carried there by Emirates Airlines, so that's why it didn't mention any of the financial issues currently plaguing Dubai. Plus, other media news.

FOI on ABC News 24 costs. Those who watch new media will know that I have had a pitch on youcommnews about the true cost of the ABC’s new 24-hour news channel. I put a freedom-of-information request in a while ago, and have just received an acknowledgement. The correspondence is below:

Thank you for your email of 16 March 2011 seeking access to documents under the Freedom of Information Act. I will consider your request and provide you with a decision as soon as practicable.

As you are aware, under the Freedom of Information Act 1982 I am required to notify you of my decision regarding access no later than 30 days after the day on which the request was received. Accordingly, you can expect to have a decision no later than 15 April.

Dubai is wonderful when someone pays for your trip. Today Tonight last night ran a suck piece on a rich horse race in Dubai and disclosed it travelled there by Emirates Airlines, so the piece had the usual interviews with the boss of Emirates and shots of the airline’s big planes at the airport.

Alan Jones, the Sydney radio personality was interviewed, along with mate and former Sydney broker and horse breeder John Messara. They had a horse running at what was billed as the world’s richest race, according to David Richardson’s effusive voiceover, which talked about how Dubai had been remade, but never once mentioned how it had almost gone broke two years ago, was still troubled financially, despite being bailed out by Abu Dhabi.

Also not a mention how tens of thousands of Westerners had fled the place in fear of being jailed over unpaid debts after being sacked by government-owned companies or suppliers to those companies that failed to pay their bills. Nor a mention of how many companies, such as Leighton Holdings, the big contractor, was also having problems getting government clients to pay their bills.

Nor did Richo or TT point out that the world’s tallest building was basically vacant, and that the place exists because of hundreds of thousands of contract workers from Indian, Bangladesh and other countries who are underpaid, overworked, have no rights and can’t attend the world’s richest horse race because they are not allowed.

No mention also of the problems several Australian corporate executives working with local companies have faced as those government-owned groups veered towards collapse with huge debts.

Normally you’d expect with that sort of background, TT would be all over the story, telling us how the poor, downtrodden guest workers are slaves to these rich Arabs. But when it comes to the facts on a nasty place where a freebie has taken them, TT was all at sea and went coy on doing its job. Current affairs? Rubbish. — Glenn Dyer

Crikey cover of the day. The Royal wedding is getting political in the UK … 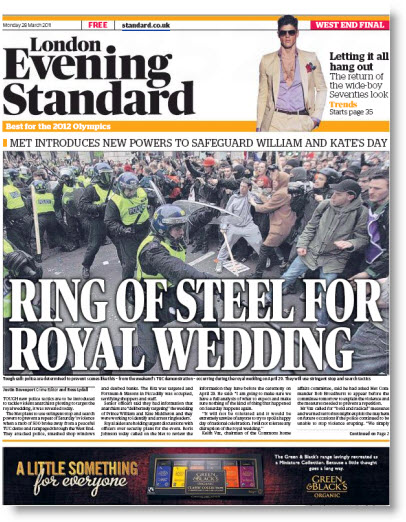 “Two Reuters television journalists have been missing in Syria since Saturday night, when they were due to return to Lebanon.” — Reuters

London Underground to get Wi-Fi

“Transport for London (TfL) has issued a call for tenders from telecoms companies to install 120 Wi-Fi connections in stations across the network in time for the 2012 London Olympics.” — v3.co.uk

Journo gets shoved in a closet by Joe Biden

“Vice-President Joe Biden is known for putting his foot in his mouth. Now, his staff is allegedly stuffing reporters in closets. A Florida newspaper reporter claims Biden’s staffers placed him in a storage closet last week to keep him from chatting up guests during a high-priced fund-raiser.” — NY Daily News

“An episode of The Simpsons which featured a tsunami was pulled from Australian TV earlier this month after the disaster in Japan.” — Courier Mail

Eddie Everywhere gets a new gig

“Eddie McGuire’s next project, sports quiz show Between the Lines, will air on Nine later this year.“ — TV Tonight

Albums get a makeover

“Magazine publishers have already looked to tablet computers to prod consumer excitement. Now it’s the music industry’s turn, as artists and record labels rush to develop iPad applications that revive and expand the idea of the traditional album and, they hope, entice fans to buy more than just a track or two.” — NY Times

“The New York Times paywall goes into effect today. We’re sure you have already thought about what you’re going to do about it, but we thought we’d remind you anyway.” — Media Bistro

The fact is that it’s just not possible to get too much of Eddie McGuire on air. I’m on the brink of writing to Nine Network management suggesting we have Eddie on 24 hour loop on one of their digital stations.

There are infinite possibilities: Eddie hasn’t done a cooking show yet, nor hosted movies (Bill Collins-style), nor have his skills at horse whispering, topiary or antique restoration been fully exploited on camera.

There are numerous programme formats Eddie could handle seamlessly and an Australian viewing public who breathlessly await his next incarnation.