Love your fat-laden fast food offerings, but watching your carb intake? KFC has the meal for you -- spruiked far and wide in a marketing blitz costing the company virtually nothing.

Love your fat-laden fast food offerings, but watching your carb intake? KFC has the meal for you — spruiked far and wide in a marketing blitz costing the company virtually nothing.

Nutritionists are lining up to condemn the US-invented Double Down bun-less burger, featuring bacon, sauce and two slices of cheese between two pieces of deep-fried chicken. As The Daily Telegraph reports today:

“We need the fast food industry acting more responsibly and not selling burgers that provide over 80% of our daily salt requirements and 70% of our saturated fat requirements in just one burger meal.”

The bad press is mounting. After a storm of controversy in the US when it was released there, noted nutritionist Dr Rosemary Stanton told News Limited papers today it was “horrifying”, while nutritionist and author Susie Burrell dubbed it “gross overconsumption”.

But does KFC care?

Its press release yesterday — declaring a “Month of ManTime” for “one of the ‘manliest’ burgers around” — sparked a flurry of free publicity that had executives of the Yum! Restaurants empire licking their lips. By 11am this morning, Media Monitors counted almost 100 mentions of the Double Down heart-stopper across print and broadcast media. Radio stations gave it more than 50 plugs, while 25 mentions were found on news websites across the country.

For tabloid papers, it was hard news. There were “stories” this morning in most of the metropolitan dailies, from an almost-full-page promo on page seven of The Courier Mail to a half-page splash on page five of the NT News. The Advertiser, Herald Sun and Geelong Advertiser all had it covered… 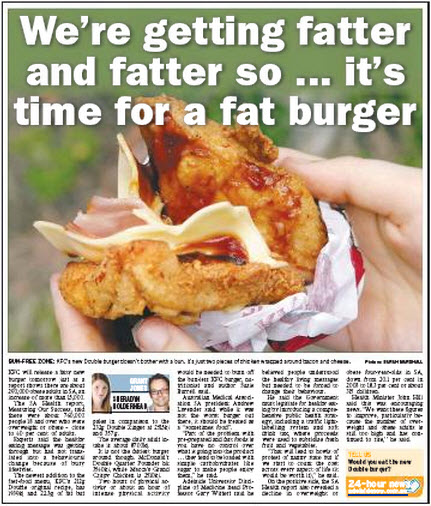 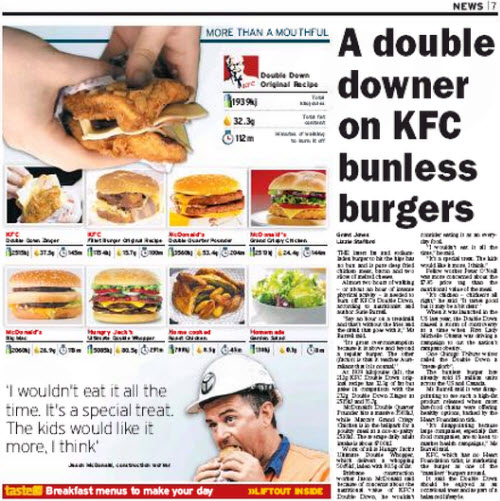 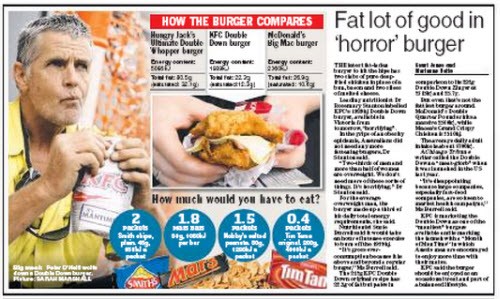 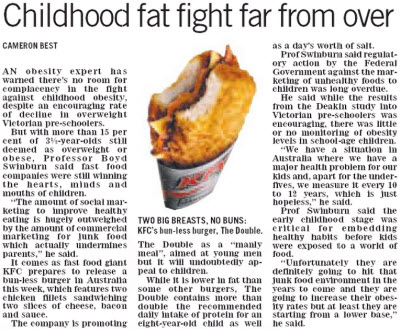 To cut through the fatty headlines, KFC offered (unscientific) “research”. As its press release noted:

“With 47 grams of protein but less fat than most popular burgers, ‘The Double’ Original is an option for times when men are with their mates, are hungry, and need something to satisfy the hunger a regular burger simply cannot fill. With the majority of men saying ManTime happens only once a week, this cheeky treat will definitely satisfy…

“Research also revealed that a favourite ManTime activity is eating. And manly eating just wouldn’t be the same without meat — three out of four men thought their idea of a perfect ManTime meal had to include meat, and that same percentage looked forward to choosing what they wanted to eat. With this in mind, KFC felt they had a duty to provide a manly meal for the men of Australia and provide the ultimate ManTime indulgence — The Double, the burger of choice for the men of Australia.”

“I wouldn’t eat it all the time. It’s a special treat. The kids would like it more, I think.”

Even as a treat, KFC has a hit on its hands.

Get Fact: what secrets are hidden in McDonald’s food?

This sounds brilliant should I ever need to lose weight ie: consume one Double Down burger and I doubt I’d want to either eat or even look at food for several days. The description alone has made me question whether I can stomach dinner this evening.

Just a thought: if this gunk is aimed at males who require ‘ManTime’ wouldn’t the oestrogen-pumped chicken meat gradually turn them girly?

I love the taste of KFC and eat it often, at least 6 times per year (no typo). I know it is also one of the worst foods out there for health and well-being. Maybe we should ask the same question of KFC and its advertisers that was asked of tobacco executives, “do you eat KFC regualrly.”

Is this an insidious plot to wipe out men? A burger a day brings the undertaker to your door.

Well i know someone who picks up the Fat and skin from the chook killers and delivers it to the place that makes the chicken Nuggets, they are half FAT and SKIN.

The age old saying rings pretty true here – You Are What You Eat – Eat KFC and you truly are shite! I think I’ll stick to what I’ve eaten for almost 20 years now resulting in very little illness, great level of fitness, low cholesterol, excellent blood count, health & general well being……… A Vegan Diet!