Nostalgia is dead history. The march itself was living history, the genuine multitude flowing peacefully from the city, past the river to the park. 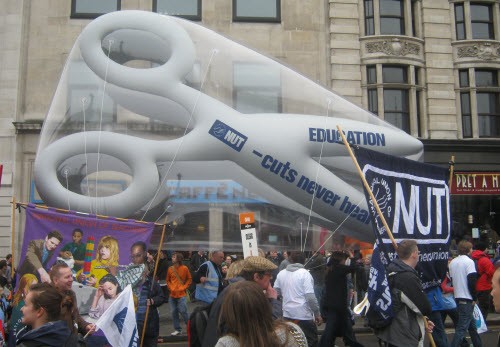 They come from Bolton and Blackfriars, from Thurso, and Land’s End on the weekend, they came with quilted union banners and handmade placards, to protest against a government that many describe as worse than the worse days of Thatcher.

They came to London, assembled on the Victoria embankment, and marched to Hyde Park. The rally, organised by the TUC, the UK equivalent of the ACTU, started at 11, and three hours later, groups were still leaving from the starting point, long after hundreds of thousands had arrived at the final point.

Standing at Trafalgar Square, as it wheeled around Admiralty Arch, and towards Piccadilly and the park, you could just watch it flow on for ever. Union branches, primary schools, local councils, party groups, library volunteers — when they want to put on a march, the Brits really don’t go for half measures.

The lowest estimate was 200,000 and some — the highest was half a million. Practically everyone had some sort of placard or banner, and from time to time, some creation would rear up huge against the sky, such as the giant Trojan horse floating serenely down the Strand.

There are times when tradition loses it deadweight, and comes crackling to life, and this was one of them — down these streets had come the Jarrow marchers, the Chartists, and innumerable others, stretching back to the Kentish peasants led by Wat Tyler, surging forth to demand an end to serfdom* in 1381.

Mind you, further up the road, the black bloc were creating a kind of low-key mayhem, with coloured smoke flares and rock hammers on shop windows, and they might also claim the same lineage — but it was all good, clean property damage, which may or may not have wrecked the media image of the rally entirely, who knows?

The TUC march had been timed to come the weekend after the Cameron-Clegg government’s first budget. Many of the cuts had already been announced; now they will start to go into effect.

The ConDem government has stated that it will only amount to 4% of expenditure — but since ring-fenced defence, health and ongoing infrastructure, etc, account for most of that, the cuts are more like 20% and more hitting whole areas of social life.

Mostly they hit the thousands of small programs that Labour introduced between 1997 and 2010 — the small piecemeal, but interlocking things that improve people’s lives and expand opportunity at an everyday level.

From Sure Start childhood development centres to educational supplementation, community health centres with vastly expanded remits, they go for the most part largely unnoticed.

There’s plenty to criticise about them — they’re often so piecemeal as to disappear altogether, behaviourist and micromanaging in their approach and they often merge social service with a type of soft surveillance and monitoring — but no one could deny that they frequently made a difference.

It is many of these sorts of things that will disappear substantially or altogether — and together with the internal part-privatisation of the health service, and the hiking of tertiary tuition fees to a ceiling of £9000/year, they represent a retreat from Labor’s limited attempts to beat back social inequality — indeed their attempt to stop the gap widening so much that it became irreparable.

It would be ridiculous to present this move as some sort of pure neoliberal nightmare — nothing like the US is going to happen, where the unemployment benefit runs out after 99 weeks, creating an ever-growing shadow world of people essentially without money, sleeping on couches and “shopping” at food charities.

But for millions of in-betweeners — people who could just make it up from the excluded/underclass, etc, into a world of greater meaning and modest comfort — it is the final blow to their hopes.

And for many of the poor, small things — such as the withdrawal of a bus service (about 30% of rural bus services will go, essentially leaving many people stranded) — it knocks out the final elements that made life other than bleak.

Labour’s proposal had been that the deficit could be reduced over twice the period, in a program that would have made the cuts survivable for many organisations that will now go under. The ConDems argue that this won’t get the economy out from under debt repayments fast enough, and that the economy will otherwise never cross a growth threshhold and take off. 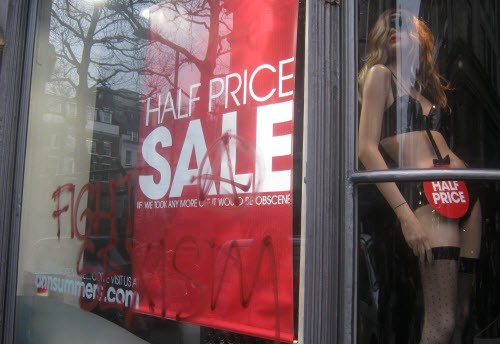 Deeper than that however, the ConDem government is using the crisis to enforce an almost virulent hatred of the state. Its version of what is unquestionably a sometimes sclerotic public sector is a caricature, much of its imagery drawn from libertarian notions of the state as a pure negative — it sucks not merely money in the form of tax, but the life and morale from people.

Labour’s model was that of partnership between state and public, and it is fair to say that most of the people on the march adhere to that view. The main difference between today’s Cons and the Tories of the Thatcher era is that they now have as little confidence in the market as the rest of us — hence the notion that a big state will be replaced by a “big society”.

Thatcher, Hayek and co thought the market was the big society — free people making free contracts, etc, etc, and for Cameron and co to effectively define it as an alien being is to give most of the game away — especially since “big societies” require more money not less to run services.

It’s cheaper to run eine grosse public hospital from the top down than it is to facilitate half a dozen locally supervised, community-controlled, interlocking multimodal health centres — and so a genuine “big society” model is pretty much dead on arrival.

What there will be is a gap — and the ConDems better hope they’re right about the economy, that it refloats, and the country becomes even more of a suburbanised consumer gadget lager sump, or whatever it is the inside of Jeremy Clarkson’s head looks like.

Should the conditions for recovery simply not be there, the mass scaling down will simply produce a further dip in spending in what is already an underperforming, underconsuming place. More shops will be boarded up in the high street, more towns fall into torpor, and — well, the engine will stall.

Should that happen at the same time that the government attempts an NHS reorganisation that people (of all political persuasion) say is too complex to be performed as a single project, then this government is in deep sh-t — and new, lowered growth projections just released will not have reassured them.

After all, the 2010 Conservative victory was about as piss weak as they get, up against such an ostensibly discredited government. The failure to win an outright majority was, when all is said and done, a pathetic result — and the Labour voters who briefly moved to the Lib Dems are unlikely to repeat the mistake.

To read the reports of the march “descending into a melee” (copyright all newspapers, including Fairfax) you’d think there’d been open combat in Hyde Park. But the march proper went off without a hitch, save for the fact that Ed Miliband was, sadly, able to attend.

The “black bloc” and other groups ranging through Mayfair and Soho and trashing bank windows, etc, amounted to no more than a 1000 people, who hadn’t been part of the main march for long, and were never anywhere near its main point.

Reports of their terrifying effect were wildly overstated, even if Piccadilly was blocked off for a while, and a full-scale barney developed late at night in Trafalgar Square after police tried to arrest a kid they’d spotted breaking a window earlier.

The main action of the day was to occupy exclusive grocer Fortnum and Mason — pleasing iconography because the store is decked out in the manner of a Regency-era shop, tables piled high with marzipan fruits, etc, etc, (I recommend the food hall, where Radio Girl and I buy our cheese). And for anarchists it was a legit enough target. Larder of the rich, etc, etc.

But for UKUncut, it was a more questionable target — since there was some doubt about whether it was tax-dodging corporate at all. It had been chosen because all the usual targets — Boots, BHS department stores, and the inevitable Topshop — were well guarded. Good move — police never saw it coming.

But most people interact with Boots or Vodaphone — so denouncing them as tax evaders makes it clear that there are different rules for different folks. F&M is more tourist attraction than actual shop — may as well occupy Madame Tussauds. It plays no part in anyone’s life, and it drew the politics back into a series of nostalgic images.

Nostalgia is dead history. The march itself was living history, the genuine multitude flowing peacefully from the city, past the river to the park. Whatever spin the yellow press put on it, the government will be in no doubt that it is up against it, from the get-go.

If the UK government’s finances are really in crisis, if the are really, really in Crisis, if they are truly really in C R I S I S then perhaps, possibly maybe the government might consider thinking about discussing raising taxes rather than cutting services.

Great coverage! Keep it up Guy!