NSW Greens: not easy being green, as high hopes fizzle

It's not only NSW Labor with some serious soul searching to do. Like at the Victorian election last November, expectations of a Greenslide in NSW did not eventuate. So what went wrong?

It’s not only NSW Labor with some serious soul searching to do. Like at the Victorian election last November, expectations of a Greenslide in NSW did not eventuate and the party faces the real prospect of not claiming a lower house seat despite widespread disillusionment with Labor.

The polls and the bookies both had local mayor Fiona Byrne as a heavy favourite to win the inner-west seat of Marrickville, but she failed to unseat Deputy Premier Carmel Tebbutt.

In Balmain, the Greens’ Jamie Parker needed only a swing of 3.7% to defeat Labor education minister Verity Firth but he finished third on primary votes behind the Liberals’ James Falk and Firth.

The result there is too close too call, with 4200 postal votes to be counted from this afternoon. Speaking to Crikey this morning, Jamie Parker said: “Depending on who you ask I’m ahead by 21 votes or behind [Firth] by 8 votes… The difference between Verity and myself is very small. It’s a handful of votes.”

Federal leader Bob Brown yesterday admitted Byrne’s controversial decision to support Marrickville Council’s boycott of Israel had undermined her campaign: “I think it [the boycott] had an effect on it — that’s my feedback from the electorate. I’m picking up from the electorate that it’s a matter of concern… As I’ve pointed out through the campaign, it’s not national Greens policy.”

On election eve police were called to investigate vandalism of Byrne’s posters which had been defaced with swastikas and phrases like “Watch out for the Nazi”. Pro-Israel groups also gathered at Marrickville polling booths on Saturday, urging voters not to support her because of her pro boycott-stance. 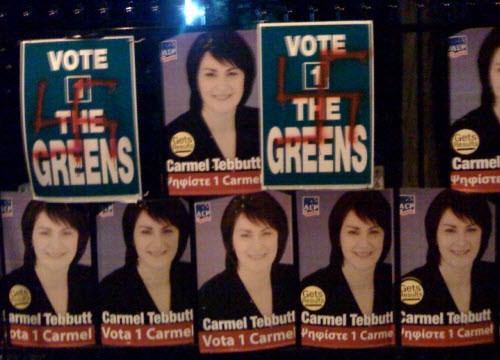 Crikey revealed on Friday that Ian Cohen, the NSW Greens’ longest-serving member in the upper house, does not support a boycott of Israel and believes it damaged the party’s campaign.

Greens upper house MP David Shoebridge tried to put a positive spin on the result, saying: “The NSW Greens have grown our vote in the Lower House and Upper House. That is an historic outcome for the Greens.”

The Greens increased their vote in the Legislative Assembly from 9% in 2007 to just under 11% this year. The party is hopeful of picking up the final upper house spot which would take them to five five MPs in the Legislative Council, but will no longer hold the balance of power. The Coalition now controls the senate via support from minor conservative parties such as Fred Nile’s Christian Democrats and the Shooters and Fishers.

Brown was in a tetchy mood with reporters yesterday, lashing out at the media for its coverage of the election. He said the ABC was “gutless” for criticising Byrne and Parker for not facing the media on the morning after polling day.

And he slammed The Australian for its focus on the Israel boycott issue: “I don’t think The Australian was very honest and ethical throughout that campaign… Instead of finger pointing, The Australian might look in the mirror on occasions. I think we know where The Australian is — it’s right out on the Right on politics. I’m very settled on that and I take it as it comes. (The Australian did not report these criticisms in its piece on Brown’s press conference today.)

Brown said he did not believe the NSW Greens need to have a parliamentary leader as they do at a federal level or other states such as Tasmania.

I am a member of The Greens, live in Marrickville, but voted for Carmel Tebbutt in the Lower House because of my concerns over the cynical and hypocritical nature of the BDS. I voted Green in the Upper House and will continue to vote Green at a Federal Level, but will not vote for the Greens in the NSW Lower House or at Local level until the BDS is repealed or until sanctions are applied to all countries whose human rights records are worse than Israel’s.

Winning lower house seats will always be very hard for the Greens. The one federal green seat in Victoria was a Liberal “mistake” and they have learnt their lesson. They will preference Labor and get them in rather than preference the Greens and help Greens get in. It makes perfect sense to me: I know how close Labor and Liberal really are. But others who seem surprised by such Lab Lib arrangements, are a bit lost in thinking that they are real alternatives.

The Greens vote in NSW did grow. That is a plus and not just spin. It is a pity to see the balance of power going to extreme right groups… but the pendulum swings… and it will swing back. Eventually.

Marrickville the Greens lost an historic opportunity and they have no one to blame but themselves. Im hoping that they leave fantasy land and stop with the pitiful victim bleating that’s begun and take a good hard look at far they have strayed from what made them a positive alternative. It certainly wasn’t ridiculous Boycotts produced like a rabbit from a hat prior to the election for the benefit of a select few special friends.
People in Marrickville find the Greens support for a Boycott of Israel absurd and embarrassing and that was reflected in Saturdays result.
Carmel must be laughing at her good fortune.

Who in Australia is financing the dangerous ‘settler’ movement associated with presidential assassin Yigal Amir? What will it mean for the world if this extremist movement ever has it’s finger poised over the button of 100-200 nuclear weapons. And would they do it?

If there was a political assassination in Australia of a prime minister would the perpetrator get a wife while in prison and conjugal rights and a son from the union?

This is the standard set by the Israeli Right. Not the kind of critics The Greens need to worry about in terms of truth and social justice.

The voice of reason wades in