Come on Crikey readers. Tell us what James Packer and Ron Walker were laughing about as they boogied it up at the Australian Grand Prix this weekend. Surely it wasn't really because Packer made a donation to Japan...?

Crikey caption competition. Come on Crikey readers. Tell us what James Packer and Ron Walker were laughing about as they boogied it up at the Australian Grand Prix this weekend. Big Ron told the Herald Sun that young Mr P was thrilled because he had just made “a donation” to Japan. But surely you can do better than that? (Mind you, James dancing a jig after giving his money away would be a story.) 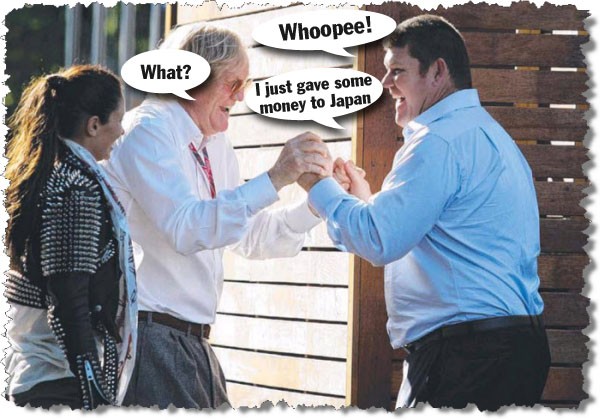 Unlike his father Kerry — who was a “Great Australian” and “very caring individual” according to Ron — James has a poor record in the philanthropy stakes. Indeed, his old buddy Daniel Petre — ex-head of Microsoft Australia — has long tried to bully him into setting up a charitable foundation, as American billionaires often do.

Perhaps the time has come for Mr Petre to give Mr P another call? Or perhaps Crikey readers have a better explanation for Ron and James’s song and dance. Best caption or speech bubble (leave your response in comments) wins. Email your responses. — Paul Barry

Slipping past the moderators. A story on the Herald Sun about Australian soldiers and their offensive Facebook updates currently has 481 comments and counting. Luckily the delightful comment by “ex army WAG of darwin” has finally been deleted by moderators… 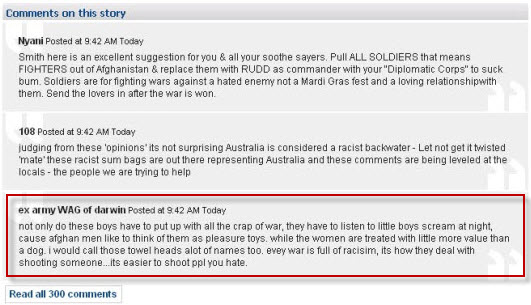 Cover of the day. A double win for the Daily Tele, but it was too iconic not to grab it again… 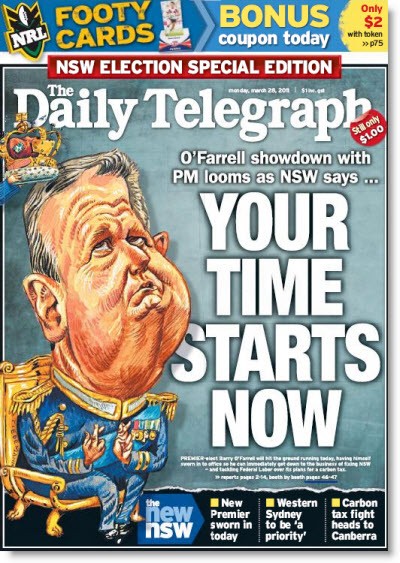 “What was to have been a musical treat last night fell apart as ABC2 Live Presents Tim Minchin vs the Sydney Symphony Orchestra found itself plagued by audio problems. The live performance by the barefoot Minchin at the Sydney Opera House fell victim to technical problems within the first 10 minutes of the show.” — TV Tonight

“Let me say up front that I have some mixed feelings about The New York Times’s metered model, which takes effect on March 28… I’m less sympathetic to the notion, however, which I’ve heard in some quarters, that there are a lot of good substitutes for The New York Times.” — FiveThirtyEight, New York Times

“Most of Mexico’s leading news organisations have signed up to obey a 10-point set of guidelines on the coverage of drug-related violence. They have agreed, for example, not to publish gruesome images, such as the photos and film of beheaded bodies that are commonly published and broadcast at present.” — The Guardian

“Radio and television stars Hamish Blake and Andy Lee have inked their next multi-million-dollar media deal, this time in the internet space. The comedy duo have signed a contract rumoured to be worth as much as $2 million that will see insurance company AAMI underwrite a series of digital content projects appearing on the pair’s website, as well as Facebook, Twitter and YouTube.” — The Australian

“Bob Herbert writes in his resignation letter: ‘I have been writing a column for 25 years, nearly 18 at The New York Times. The deadlines and demands were a useful discipline but for some time now I have grown eager to move beyond the constriction of the column format, with its rigid 800-word limit, in favor of broader and more versatile efforts.’” — Poynter

“The final original episode of The Oprah Winfrey Show will air May 25.” — The Huffington Post

The Crikey contest goes down to the wire