The meaningful polls. With minds at last as concentrated on voting as they are ever likely to be, this is the time to start taking the opinion polls seriously. And unless the people of New South Wales have been party to one of the greatest ever deceptions in the history of political polling, Labor is […]

The meaningful polls. With minds at last as concentrated on voting as they are ever likely to be, this is the time to start taking the opinion polls seriously. And unless the people of New South Wales have been party to one of the greatest ever deceptions in the history of political polling, Labor is on the verge of a humiliating defeat.

Battling to save the profits of European banks. The task of preventing the major banks of Germany, France and the UK from having to write down billions of euros worth of loans to ailing European states is reaching another crisis point since the Portuguese Parliament refused to support a tough budget. Bloomberg reports “two European officials with direct knowledge of the matter” saying a bailout for Portugal  by the European Union and the International Monetary Fund may total as much as €70 billion ($99 billion). That is dependent, of course, on the country agreeing to cop the tough terms that would go along with the loans — something that must be open to some doubt. What happens if Portugal simply reneges on its debts, goodness knows but the banks that lent to them during the boom years would suffer horrendous losses.

Then there are still the problems remaining of Ireland and Greece and how they will cope with the repayment task set for them in return for their bailout billions. That the financial markets are sceptical about the future is shown in interest rates for both countries being at or near record highs.

Hurt by the GST. The major brewers currently lamenting a wave of price cutting by the major liquor retailers can blame John Howard and his goods and services tax for the start of their problems. One side effect of that taxation change was to remove sales tax — something that was applied to imported beers at a rate of 15% but which did not apply to the local product. It was a wonderful form of protection.

Since then the two majors — Coles and Woolworths — have realised that imported beer can be competitive with the VBs of the world despite the extra freight cost. So if Foster’s tries to get too tough in trying to stop retail sales at less than cost, it had better prepare for even bigger displays of imported alternatives. 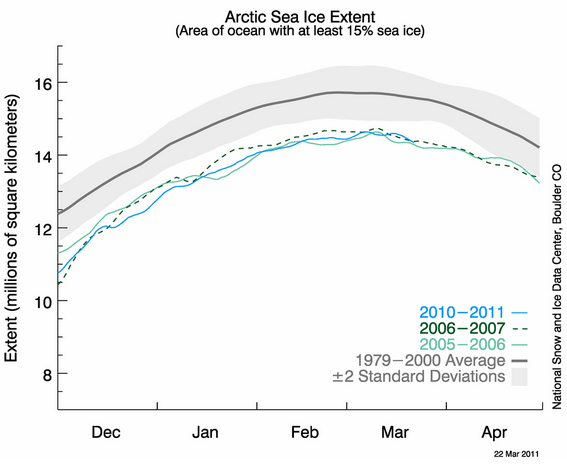 The graph above shows daily Arctic sea ice extent as of March 22, 2011, along with daily ice extents for 2006, which had the previous lowest maximum extent, and 2007, the year with the lowest minimum extent in September. Light blue indicates 2011, green shows 2007, light green shows 2006, and dark gray shows the 1979 to 2000 average. The grey area around the average line shows the two standard deviation range of the data.

The National Snow and Ice Data Centre reports there is still a chance that the ice extent could expand again. Sea ice extent in February and March tends to be quite variable, because ice near the edge is thin and often quite dispersed. The thin ice is highly sensitive to weather, moving or melting quickly in response to changing winds and temperatures, and it often oscillates near the maximum extent for several days or weeks, as it has done this year.