Starting a Conversation … time up for Gould?

Starting The Conversation. Ex-Age editor Andrew Jaspan’s academic commentary site The Conversation finally went live yesterday after months of pre-testing and personnel hiring. After a flurry of suggestive tweets, the aggregation portal sprung to life at about 2pm with a worthy lead story on science communication, some analysis on last month’s collapse of Red Group and a public domain piece on the St Kilda schoolgirl — which predictably leapt to the top of the site’s “most read” list.

Right up until 9am today the initial content remained in place, until a blanket switchover of stories focused on tomorrow’s NSW election, most notably an amusing piece from Socialist Alternative ANU comrade Rick Kuhn who in his first sentence branded Bob Carr an “erudite policy thug”.

One interesting feature is a disclaimer attached to each author’s byline, although we’re not sure University of Melbourne Vice Chancellor Glyn Davis “does not work for, consult to, own shares in or receive funding from any company or organisation that would benefit from this article, and has no relevant affiliations”, given his university’s status as a “founding partner” and The Conversation‘s landlord.

As Crikey revealed in December, a good portion of the financial heft for Jaspan and general manager Jack Rejtman’s baby is sourced from the taxpayer through state and federal governments and indirectly through some Group of 8 universities. The “our team” page reveals an impressive 19 paid staff members and a further 17 directors and advisers, which as Margaret Simons pointed out last night, is about three times the weight of Crikey‘s payroll. A media meet and greet at The Conversation‘s Lincoln Square HQ is planned for this afternoon and Crikey will report back on the promised “fly on the wall” experience on Monday. — Andrew Crook

Chop for Gould? The whispers are getting louder that Dean Gould, editor of the Gold Coast Bulletin, is in for the chop in the very short term. According to multiple glitter strip sources, News supremo John Hartigan was up on the Gold Coast last month where Gould gave a PowerPoint presentation on “where to from here for the Bully“, which staff had been working on since the obvious ‘show cause’ notice Hartigan gave by making the unexpected visit request a few weeks earlier.

Apparently the PowerPoint didn’t impress the hard-nosed Hartigan, who showed understandable displeasure at continuing falling circulation, lower ad revenues and wasted money on the revamp the paper completed soon after Gould took over.

Following Crikey’s exclusive report of Gould’s imminent demise before Christmas, the Ed called an extraordinary staff meeting where he actually brought up the subject and said that all those staffers “running around saying I am gone are completely wrong and should sack their own sources — I’m here to stay!”.

Now, the rumours are heating up again, with the word on the street is that a role is being created at another capital city for Gould and that replacement front runner, Townsville Bulletin editor Peter Gleeson, has been told to start packing. The axing rumor is now all over the Gold Coast paper as well as staff from papers down south in Sydney and north in Brisbane where the GCB is subbed these days. – Andrew Crook

Father and son competitors. The suggestion that The Australian‘s ambitious Victorian business editor Damon Kitney will soon return to Fairfax to edit The Australian Financial Review have reached fever pitch, as first floated by Crikey on Monday. Kitney has just bought a house in Victoria following his original defection from The Fin last May, but the lure of the nation’s plum business journalism post has again shifted his gaze northwards.

Humorously, if Kitney does finish up back at Pyrmont he’ll have a potentially rebellious underling to deal with — his father Geoff — who continues to write excellent political colour pieces out of Canberra well into his twilight years. Alternatively, if Kitney doesn’t take the gig, Sean Aylmer is seen as next in line.  — Andrew Crook

Doing the full Circle. An unfortunate incident on Ten’s The Circle this week. After an emotional interview with Nick Vujicic, the Aussie guy born with no arms and no legs, host Colin Lane tells the audience they get a copy of Vujicic’s book and then throws to Marianne Van Dorslar for an advertorial segment on Telstra broadband. Van Dorslar opens: 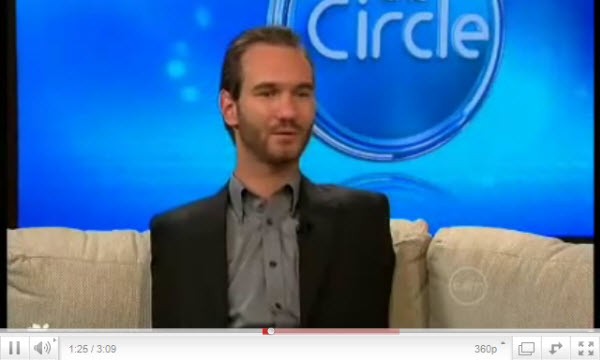 Front page of the day: Tomorrow is the day NSW has been waiting for… 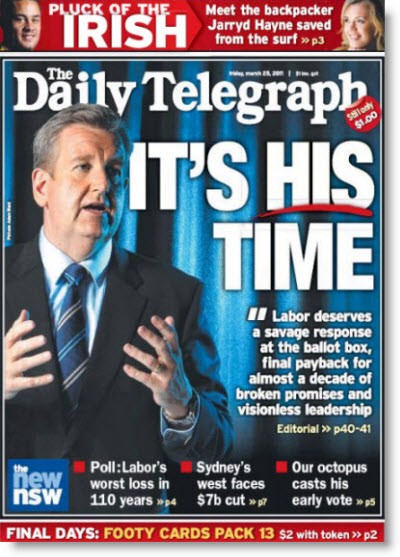 “Elizabeth Taylor’s death was a major international news story, with papers all over the world splashing her pictures across their front pages.” — Huffington Post

“Agence France Presse said the Libyan government released on Wednesday three journalists captured last week near a key eastern city that has been a daily battleground between Moammar Gadhafi’s forces and Libyan rebels. The AFP reported the three were freed in Tripoli.” — Google News

“Google Inc. and the authors and publishers that sued the company face a major challenge salvaging a proposed legal settlement to make millions of out-of-print but in-copyright books available digitally.” — Wall Street Journal

“The news from Japan is both awful and appalling. Awful: 23,000 confirmed dead or missing, and counting. Appalling: pretty much anything to do with the damaged Fukushima nuclear plant. Nuclear meltdown like Chernobyl! Deadly contaminated milk and radioactive tap water! Tokyo a postapocalyptic ghost town! A plume of radiation that threatens America’s West Coast!” — TechCrunch

“We hear a lot about Google’s relationship with publishers, but this week the search giant also quietly launched its own online publication based in the UK. Think Quarterly, which calls itself a “a breathing space in a busy world” is, as the name implies, a quarterly online magazine.” — News Grange

“Ark Music Factory, the vanity production company Rebecca Black’s mom paid $2,000 to make that “Friday video,” just released this teaser video for something they’re calling ‘The Truth About Ark.’ Not really sure what to make of this, but apparently it will counter all the mean things people have been saying about Ark, i.e. that they exploit their roster of tween girls’ misguided dreams of fame for profit.” — Gawker

Staerk reality is the column is cut; the revamped Bulletin fails to fire

Could someone whose facility with online or otherwise readily available sources for research is better than my memory recall the unfortunate conjunction of a radio news item circa 50 years ago about the crash of an Ansett Viscount aircraft and the immediately following jingle “Light up a Viscount, a Viscount, a Viscount: light up a Viscount, the best of them all” [that’s my non-smoker’s memory of the jingle which I don’t guarantee to be 100 per cent accurate]? It was supposed to have cost the radio station Ansett advertising. The prompt for this memory is, of course, the unfortunate incident involving Ten and the “arm and a leg” described in “Doing the full Circle” above.

Had a look at The Conversation site. No-one is posting comments yet. I posted 2, one on super, one on nuclear energy and Japan, with root and branch criticisms of the OP. The funny thing from attending universities for perhaps 6 years was that academics can actually be very brittle about criticism or ‘conversation’ as it undermines their ‘expert’ ‘authority’ position as lecturers etc which they don’t like. So don’t know whether this will be a brittle website with some very real unspoken bounds about what’s cricket, which would be a hypocritical intellectual failing of course, or something that invites debate and discourse. Most universities are just businesses these days, despite what the academics might vainly hope for, and the university periodicals are full of ‘good news stories’ and puff pieces about how great their research is, so not much hope of an earnest conversation with faculty there either.

Plus its public service size staffing levels on the public purse — no subscription demanded at this stage. Crikey is possibly looking at this new Melbourne site with some degree of trepidation as there is some overlap there in content and even geographic location. Who knows whether it will hurt Crikey’s business at this stage or be taken up with much enthusiasm by a broader public. Crikey has some excellent writers offering contrarian insights on a range of world affairs, something I doubt this new site will be able to do. Although it will beat Ltd News on that front for intellectual honesty hopefully.

There are a bunch of other sites already in existence that try to do public opinion and so forth, but this is more of a newspaper or crikey-style format, and will have different forms of content than a series of dry essays.

I see no need for an overstaffed taxpayer subsidised competitor to Crikey and would happily sign a petition if it might to do any good. Even one in the Victorian state parliament might help get something going (with the odd speech on the adjournment to stir a Minister into some action) and the federal parliament would be a good place for objecting to taxpayer subsidies which create unfair competition. From Sophie Mirabella to Craig Emerson there should be plenty of supporters happy to bore it up Rudd’s mate at Melbourne University.

It makes it even worse that the worst failed editor of the failing Age is allowed to prance on the media stage this way.