Greenies hit out at secrecy over Victorian power plant

Green groups are alarmed that details of a state and federal agreement to fund a new broad coal-fired power station in Victoria will remain secret after the new state government refused to release key documents.

On Wednesday the Ted Baillieu-led Coalition used its majority in the Legislative Council to protect the commercial confidence of a deal to build a HRL-Dual Gas coal-fired plant in the country town of Morwell, worth $150 million dollars of public funding.

The funding agreement documents were originally requested by the council at the beginning of February. The refusal to release them has raised suspicions among the Greens and environmentalists.

In a letter to the Victorian Legislative Council, Attorney-General Robert Clark cited commercial confidence as grounds to keep the documents confidential: 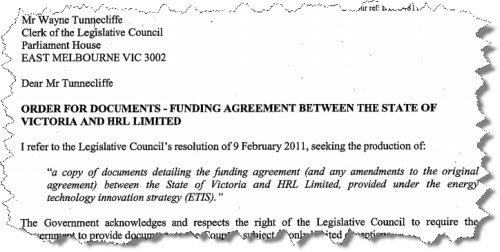 “… the documents contain sensitive financial and commercial information and proprietary intellectual property of the company.

Greens MLC Greg Barber says the documents may include key milestones that the company needs to meet in order to receive the funding. The documents could also contain clues as to why HRL are failing to provide outstanding information to the EPA, on which its future depends upon.

Delays have marred the proposed 600-megawatt brown coal-fired plant since its inception. HRL was provided with federal funding in 2007, yet the company has twice failed to provide adequate plans to the EPA for final assessment.

The future of the HRL plant hangs on its ability to measure up to stringent new emission reduction standards outlined in conjunction with the state’s Climate Change Bill last year. The key component of the bill is the emissions reduction target of 20% by 2020 to 2000 levels. In conjunction with the bill, former premier John Brumby proposed new powers for the EPA to assess future power plants on the basis of an emissions target of 0.8 tonnes of carbon dioxide per megawatt hour of electricity generated.

But HRL has failed to produce sufficient plans to match this target, despite the original conditions for the funding stating that work start within three months of the agreement. In November last year EPA made a final request for HRL to provide outstanding information. Subsequently, the EPAs ruling on the construction of the plant has been stalled.

When asked why HRL was withholding information, EPA spokesperson Ruth Ward said: “I have no idea. Your guess is as good as mine.”

Crikey then posed the same question to HRL, which refused to comment, and when questioned further, instructed Crikey to talk to the EPA.

Greater transparency and accountability should be expected of an industry backed by public funding, Barber told Crikey.

Despite the masses of public funding, the proposed brown coal plant has encountered fierce public opposition, with the EPA receiving 4000 submissions in response to its proposal. Meanwhile, environmental groups are questioning the likelihood of the HRL plant to meet its energy emission targets, and also the EPAs power to regulate them.

Claire Maries, from the Australian Conservation Foundation, says that for the EPA to effectively assess the HRL plant, its new powers, originally outlined by the former Labor government in state parliament last year, need to be legislated.

“The Baillieu government should pass a strong new emissions standard for all new energy generation in Victoria and let EPA get on with their job of protecting our environment,” Maries said, noting Australia needs to make a rapid shift to a clean energy economy and end dependence on carbon pollution.

And she questions the capacity of the Baillieu government to live up to the Climate Change Bill’s target is also doubtful: “Paying companies like HRL to develop new coal generators is actively working against that [target].

“HRL is trying to use probably the dirtiest fuel in the country and dress it up as best-practice clean energy.”

How Victoria puts you through the FoI wringer

Ex-Victorian premier: FOI ‘has been allowed to wilt’

I suppose the new Premier of Victoria pledged more ‘open’ government during his campaign. Watch this space for O’Farrell doing the same in NSW. I’m going to be really generous and give him 6 months – perhaps the first budget even? We’ll see!

The world will see what we’re doing and judge us accordingly.

Crikey could do the world a favour by having someone explain, in a bit of technical detail, what “dual gas” actually means on the ground. There are many people who allow themselves to think this will be a gas-fired plant and therefore low emissions. Especially since it’s in eastern Victoria close to the oil and gas wells of Bass Strait. Of course it is no such thing. It’s actually brown coal burning but in two stages. Most of the emissions will be released in the first stage before the stuff enters the electricity generator. But mugs are mugs no matter who is duping them.
And don’t think this is a Liberal spin. Labor was spinning just as hard before it ran out of puff. “Dual gas” sounds even better than natural gas but it’s heaps worse and Victorians, of whatever persuasion, should admit it or admit their ignorance.

I’m sure that after wandering in the wilderness exploring the politicians fantasy of CO2 sequestration, some time was spent investigating better methods of burning coal.
I’m also sure that if the idea was to take some of the older plants off-line after this much better coal plant is built we would be hearing about that.

Meanwhile we have a bunch of Solar and Wind projects stalled for lack of funding or planning approval… somewhere in the order of four or five times the proposed capacity of this plant.