The Australian has offered a "clarification" for breathlessly reporting a speech from Rupert Murdoch -- delivered some 12 months earlier. It was Mark Day who first wrote about it, with media editor Geoff Elliott demanding another journo to pen a similar story.

How The Oz got caught in a time warp. The Australian has offered a “clarification” for breathlessly reporting a speech from Rupert Murdoch — delivered some 12 months earlier, as Crikey outlined yesterday. After The Oz pulled the article from its website late yesterday, it provided this on page two of today’s paper:

But the newsroom is still pointing fingers over how both a news article and a Mark Day column could be based on a speech from the same conference in a different year. Crikey understands it worked the other way around: Day penned his piece on his boss’ musings first, prompting media editor Geoff Elliott to go to his rostered-on journo in Lara Sinclair, speech in hand, to file the news report.

Sinclair was just following instructions, our newsroom source said today, with Day expected to apologise in his column on Monday. — Jason Whittaker

Abbott in the papers — an amusing contrast. An interesting contrast between print versions of The Age and The Australian today. The Age has a picture of Tony Abbott fronting that rally, framed by the offensive posters. The commentary is all about how extreme the crowd was, and how awkward it was for him to front it.

The Australian? The headline is “Key Adviser sees risk in carbon tax”. No photos of rallies on the front page. Turn to page four, and you find a photo of Abbott in front of the rally, but not an offensive poster in sight! Did the photographer miss the shot? I don’t think so. This is a culling decision made by editors. So which outlet is biased? 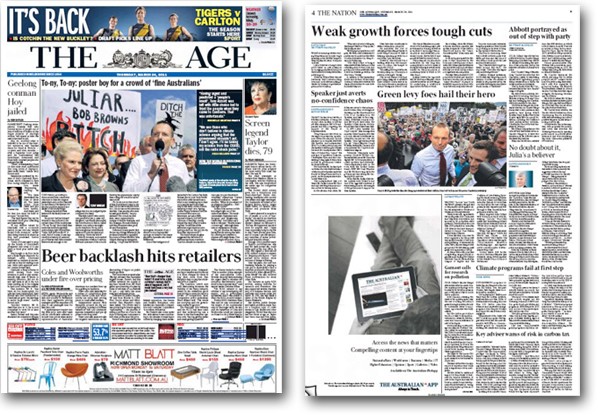 Negus promoted/demoted in Ten shuffle. I’m on record as liking the idea of the Ten news block — 2.5 hours of news seems excessive when looking at it as a continuous block on a schedule but, in terms of counter-programing, picking up the 9-5 workers as they get home and maintaining a consistent viewer-base from the 5pm news to The 7PM Project, it’s a fairly solid idea.

Viewers haven’t turned up for 6PM With George Negus, which is a shame. Combined with the 6.30pm news, Negus’ show provides a great contextual understanding of the days news events. It was certainly clunky for the first few nights, but it quickly came good.

The 2.5-hour news block was a clear and cohesive vision. Today’s announcement that Negus is on the move to 6.30pm each night completely erodes the programing strategy. The thinking behind the news block had 6PM following the news to provide a counterpoint to the news bulletins on the other networks. It is different in style and purpose. Prior to the scheduling of 6PM, Ten had a massive problem of viewer drop-off at 6pm, with news audiences switching away from The Simpsons/Friends/random US filler in favour of other news programing. This meant that at 6pm, Ten were losing their lead-in, left with the need to build an entirely new audience. — Dan Barrett (more at White Noise)

“The first assault came on Monday when Fox’s defence correspondent,Jennifer Griffin, alleged that Gaddafi’s forces had successfully thwarted air strikes by using journalists from CNN and Reuters as human shields. She claimed that British aircraft were about to fire missiles at a target but were forced to abort the mission because journalists from CNN, Reuters and other media teams were too close.” — The Guardian

“It took The New York Times more than a year to design its paywall, and it took the rest of us about 24 hours to figure out ways around it. Ah, the wisdom of crowds.” — Newspaper Deathwatch

“In a Santa Monica courtroom this morning, Judge Jacqueline A. Connor of Los Angeles Superior Court turned down a last-minute request for a temporary restraining order that would have blocked the dispute from being sent to arbitration by JAMS/Endispute, a mediation firm. The request for arbitration was made by Warner, invoking what it said it believed to be a contractual right.” — Media Decoder

Elizabeth Taylor’s NYT obit writer died before her … in 2005

The news of Elizabeth Taylor’s passing has put an added sadness to this already gloomy day, but not everyone was shocked. The New York Times‘ principal writer for the Taylor obituary died almost six full years ago.” — Village Voice

Crikey’s coverage of the No Carbon Tax Rally

An early Queensland election is Bligh’s to lose

Hitting the footpaths for the No Carbon Tax rally

But if you read the obit the Times clearly states that the principal writer died 6 years ago but the article has been updated since. What is wrong with that? I bet Crikey doesn’t have thousands of obits ready to go. The NY Times is only being honest

Makes me wonder how many Obit writers Keith Richards has now outlived?

As I’ve noted elsewhere, check the “laundry job” of that rally, in the local “Curry ya Mail” – they were “washed, starched and “pressed” – ready for customer pick-up”.

Abbott makes the prefect Lizard of Oz, talk about typecasting.
Does that make Julia, Dorothy?