Simons: TV ratings war … just who is bullying whom?

So two TV channels seriously pretend that they have some kind of moral standing in this bullying debate. In fact, it's child abuse.

“It’s clear that he is a young boy under a lot of pressure,” said the voice-over, as the 12-year-old ducked his head and wept. And the camera moved in.

And on the other channel, a 15-year-old confessed to the nation’s viewers something that apparently  he had not even confided to his parents — that bullying had made his life such a misery that he had contemplated suicide.

In fact, it’s child abuse. Yet of a kind that the child welfare agencies are powerless to prevent. The broadcasting regulator, the Australian Communications and Media Authority, is likely to be powerless to act. Calls to ACMA this morning were not returned before deadline. I’ll keep you posted on the regulator’s response.

I am talking, of course, about the boys involved in the YouTube bullying video sensation du jour, now fodder for tabloids and tabloid television. Unless you have been living under a rock you will now know that the video, posted to YouTube by some teenage media adept, shows a skinny little kid throwing punches at a bigger boy, before being picked up and slammed into the concrete.

So it was not commercial TV current events that committed the first act of publication. But boy, did they move in fast.

It would be nice to say the behaviour of Today Tonight and A Current Affair was shocking, but sadly we are no longer shocked by them. They are living down to expectations. 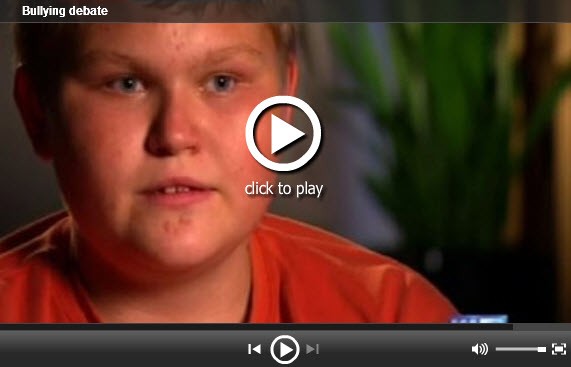 Yet it is also true that this is a new low.

And here is something new, and boy, it takes the breath away. It is a twist worthy of Jonathan Swift, or of Kath and Kim, or any other piece of biting social satire that shows up our grotesqueries.

Except it’s real. These two programs, which reportedly have paid the boys’ families $40,000 each for interviews, are fighting over the fact that they lifted and used each other’s footage.

Oh, the outrage. What’s the point of paying all that money to the sad families involved, when your footage is simply lifted? 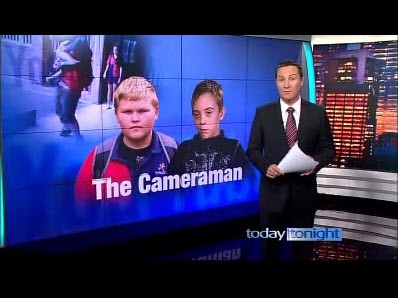 So these two channels seriously pretend that they have some kind of moral standing in this debate. Clearly they have no shame, no sense of their own place in this sad tableau.

It is hard to believe that the dispute will ever go to court, but if it does we will be treated to the two channels huffing and puffing over who “owned” the interviews. Meanwhile, the boys concerned, having wept their public tears, will have probably disappeared from the headlines, back in to the hard realities of their lives. There will be nowhere for them to hide from the consequences of those interviews. They will always be defined, more than they would otherwise be, by their troubled teenage selves.

Who can doubt they will still be suffering, and that suffering will have been made no easier by their appearance before the cameras. But the shows will have moved on, the producers and reporters still puffed up with their sense of self importance, their apparent licence not only to broadcast but to use and abuse.

Bullying is a serious issue, of course. Perhaps the most serious issue in many young people’s lives. It deserves media treatment.

But 12-year-olds encouraged to cry on television? Fifteen-year-olds confessing to suicidal thoughts? Children made to perform in a confected morality play to feed the ratings war?

And then a spat over who owns the results?

For pity’s sake, spare us.

Are the ratings stakes so high for these programs to justify this? Or are they just blinded with competitive rage?

It is too easy to say that the parents are to blame.
They should have told TV to go to buggery. There is permanent damage done now that is irreversible and, thanks to TV, incalculable.

The trouble is that TV is much smarter than the parents and has infinitely deeper pockets. Electricity bills, mortgage repayments, rent, school fees, food; it must have seemed like easy money to the parents. With no experience in dealing with the vermin that is the press these days, they would have been like rabbits caught in headlights. And why was there no one to help them or protect them or their children?
Because these animals self regulate. Yep. Selectively following a bloke on his way home after work and outing him as gay is reasonable in their world.
Getting an old lady to put chains around herself and make any claim she likes on TV is fair and in this world, they give their top awards to lard arses who hang around in mens change rooms and pay for gossip.
Overseas, this mob and their ilk give these awards to blokes who hire people to hack into private mobile phones. What is to say that it is not happening here all ready?

For pity’s sake spare us indeed.

Wish I had known about picking up an easy 40thou for a bit of bulling back in my day, sh#t we use to cop it for nothing. How smart are the youngn’s today, or is that how dum is CA or TDTN?

The “Frontline” team should come out of retirement. There is so much new fodder to be had they could do another two series at east. Should be labeled as a documentary series however – not as a satirical comedy.

I find it deeply regretable that the 2 front persons on these programmes, have not the professional character and responsiblity to tell their producers they want nothing to do with this gutter glossy magazine type sensationalism.
The lack of ability, the absolute lack of personal professional pride is no longer paramount, the almighty dollar rules and to hell with the lives that are effected by their gross search for rating superiority.