The Australian‘s Media section on Monday had coverage of a speech made at a media summit in Abu Dhabi; indeed one report said it was “the inaugural Abu Dhabi Media Summit” that was “opened” by “the News Corporation chairman and chief executive”. Lara Sinclar wrote:

News Corporation wants to ride the winds of change, democracy and openness in the Middle East, with Rupert Murdoch calling for governments in the region to encourage creative expression in the media from their citizens, and for business incentives for international entrants.

The News Corporation chairman and chief executive, who last week opened the inaugural Abu Dhabi Media Summit in the United Arab Emirates, positioned the company as a champion of free speech through its move to expand its operations in the region.

Sinclair referenced the ongoing uprisings in the Middle East, noting “as extraordinary events unfold in Libya and across the rest of the Middle East, Mr Murdoch noted the role of the media and new communications in a speech redolent of his famous Whitehall Palace speech in 1993 when he said new forms of communications were a threat to “totalitarian regimes everywhere”.

Murdoch’s keynote speech at the Abu Dhabi Media Summit last week had echoes of Whitehall Palace and may surprise people who see Murdoch and News through a prism of anti-Muslim bias.

Murdoch began by quoting an Arab saying — “if a wind blows, ride it” — and argued his case for an open, creative society as the best way to create jobs and prosperity.

“As I speak, there is a powerful wind blowing through this region,” Murdoch said.

“This wind is the creative energies of your people, who are aching to make their own mark on the world around them.”

He said creativity flourished best in societies where governments intervened with a light hand and backed his call with some rare personal insights.

A look at the News Corp website finds this speech by Mr Murdoch to the Abu Dhabi summit in 2010. Here’s a photo of him at the summit: 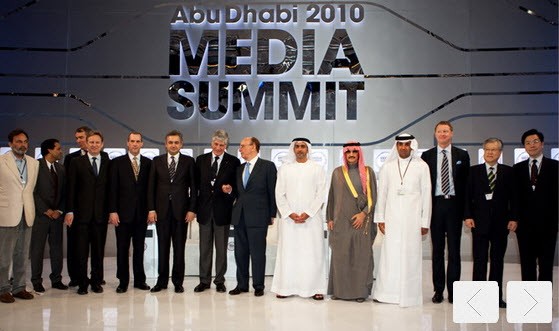 Let’s quote from it:

“In this I am mindful of the Arab proverb: ‘if a wind blows, ride it.’ As I speak, there is a powerful wind blowing through this region. This wind is the creative energies of your people, who are aching to make their own mark on the world around them.”

So this speech was a year ago, and these two reports  from The Australian were this week. The stories by The Oz also firmly place Murdoch’s speech in the context of the current situation in the Middle East.

The Summit blurb doesn’t list Murdoch as speaking or opening last week’s effort; only son James was listed as appearing. He interviewed film director James Cameron about the movie Avatar.

Now let’s sum up here: Rupert Murdoch makes a speech in 2010, and it is reported as fact and having been made in 2010. The conference to which he spoke is described as the “inaugural” summit, when in fact this year’s is the second time it has been held. James Murdoch was there, but talked to a film director about a News Corp movie that made News an awful lot of money.

Day went on to write: “I have seen no responses from the leadership of any of the Arab states…” And ended the column with the line: “It is perhaps a forlorn hope, but I’d like to see the impact of last week’s speech a couple of decades from now.”

Maybe, given Murdoch gave the speech a year ago, we could go as far as to credit him with inspiring the march of democracy across the Middle East…?

Crikey went to The Australian’s editor-in-chief Chris Mitchell for a comment but he didn’t get back before deadline.

Financial crunch: the new lame ducks are queuing up

Looking forward to seeing their explanation…..

Glenn, as I’m sure you are well aware, when the Rev Mr Mitchell doesn’t wish to comment, he is unavailable. Particularly when his rag has a made a boo boo, even more so when it involves ‘dear leader’ pop Rupe.