ABC presenter taunts newsreader. Shocked murmurings continue to burble at the ABC’s Southbank studios in the wake of Afternoons presenter Richard Stubbs’ mocking of newsreader Liz Hobday before her 3pm bulletin on Monday. During the 1pm and 2pm news, the popular Hobday appeared to be struggling with her pronunciation of “Colonel Muammar Gaddafi”.

In the lead-up to the 3pm bulletin, Stubbs, in what ABC insiders have dubbed an “ugly” act, decided to shame the youngster, replaying her gaffes in a Kyle and Jackie O-style sting attempt to his 58,000-strong listenership. Would Hobday stumble again? Three strikes and you’re out? Ahh, the tension! Or as Stubbs called it:

“All of Victoria dry-mouthed with anticipation. The one o’clock news saw this: [Stubbs plays Hobday’s first Gaddafi stumble]. Bang that was 1 o’clock, Liz Hobday stumbled at the first hurdle. But she went into the room of mirrors, she walked hard, she worked the bag, her corner fanned her off, they sniffed the salts, she practised, she trained and she was back in the ring for two o’clock: [Stubbs plays second Hobday stumble]. Bang, straight over and again, smashed and down. Three o’clock news looming and the whole world waits…”

Hobday, to her credit, came up trumps on the 3pm bulletin, sailing through the five minutes with nary a stumble.

Insiders say the background to the stoush is a long-running rift between 774’s news division and its daily presenters, with Stubbs’ act an apparent attempt to “get back” at his reporter foes. Unfortunately, the listening public is unlikely to distinguish between the tribes, leaving the sledge with zero justification. Imagine the uproar, for example, if the news team decided to replay one of Stubbs’ or Jon Faine’s errors? — Andrew Crook

Xanadu? Xanadon’t. Interesting to compare the placement given to the premature death of 1980s musical Xanadu in Melbourne’s two daily newspapers this morning. The Age went large with a prominent page three yarn penned by theatre doyen Robin Usher. But the Herald Sun only managed a small brief in its Confidential gossip section on page 25. Could it be the Hez was embarrassed to give the story too much prominence because of its official sponsorship of the Olivia Newton-John-inspired campfest?

In addition to the sponsorship moolah, a bevy of Herald Sun identities, including associate editor Andrew Bolt, attended the premiere on March 3. There was zero mention of the $900,000 shortfall in donations ticket sales were meant to gift Newton-John’s teetering Cancer Centre. Maybe the Hun could have saved Xanadu if it sold tickets on the News Limited-owned Foxtix site — the exclusive vendor for the Albert Park Formula 1 Grand Prix. — Andrew Crook 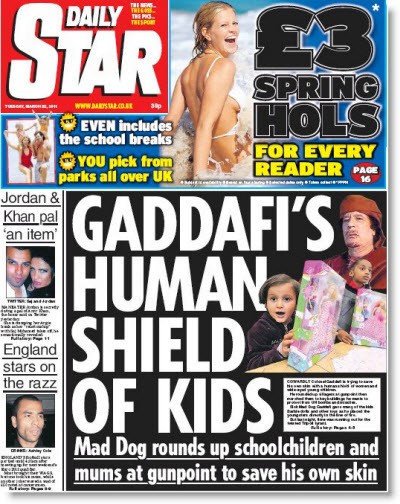 “Google Inc.’s six-year struggle to bring all the world’s books to the Internet suffered another big setback at the hands of a federal judge in Manhattan. Denny Chin, a judge on the 2nd Circuit Court of Appeals, rejected a 2008 settlement that Google forged with authors and publishers to make millions of books available online.” — Wall Street Journal

News of the World, Guardian the newspaper of the year?

“Can you believe it? Among the five titles heading the votes to be newspaper of the year are the News of the World and the Guardian. Or, to put it another way, the paper alleged to have been involved in hacking is up against the paper that revealed the hacking.” — The Guardian

“Women occupy about 27 percent of the leading managerial jobs such as chief executive officer and about 26 percent of governing board positions, according to a survey of 522 newspaper, radio and television companies by the Washington- based advocacy group.” — Bloomberg

Wall Street Journal on the iPad, Apple to take 30% cut

“The Wall Street Journal will begin selling individual copies of its morning newspaper through its iPad app on Wednesday, a Dow Jones spokesperson confirmed in an email to Mashable.” — Mashable

“If you’ve picked up a newspaper lately – especially a local one -you might notice that it’s a little on the thin side. Newspapers have been hit hard with the advent of digital media, and it’s only the big ones that have recently begun to adapt by erecting paywalls for their digital content.” — All Twitter

Guys, you need to get your reporting correct. Liz Hobday (popular?? according to who???) did not “STUMBLE” on “Colonel Muammar Gaddafi”. She pronounced the word “colonel” (similar to kernel) as Col-oh-nal (as in colonial).

By the way Hobday DID NOT “come up trumps” in the 3 o’clock bulletin …… she made no attempt to pronounce the world “Colonel” again – luckily for her.

I thought the Stubbs dig was hilarious. He is always the first to make fun of himself and his own mistakes on air and your suggestion that it was a “Kyle and Jackie O” style sting is just complete sensationalism.

Get a sense of humour Liz, and get your reporting accurate Crikey!

You really should have listened to the audio before posting a comment Kim.

Wow Andrew, what a patronising response. What makes you think I didn’t listen to the audio. I did listen to it, there were in facts 3 stumbles not 2. So if getting the facts right is a pre-requisite, where do you sit??? You don’t answer any of my other points, but just assure me I’m allowed to post. Yeah thanks for that, here’s a shock – I didn’t need your permission.

I’m just curious – why is there a rift between the newsreaders and the presenters on 774?