Hitting the footpaths for the No Carbon Tax rally

First-time protesters in their fifties gathered alongside Young Liberals in their twenties for a show of strength for the Melbourne leg of the No Carbon Tax rally. Tom Cowie and Andrew Crook were there.

From one block south, the ‘No Carbon Tax’ parade could have easily have been mistaken for a gaggle of public servants on a mid-morning coffee run. The mostly white, mostly elderly crowd trudged toward state parliament, occasionally muttering curse words like “Julia”, “Joo-liar” and “carbon” in no particular order.

There were signs and placards everywhere as first-time protesters in their fifties gathered alongside Young Liberals in their twenties for a show of strength on the footpaths of Swanston Street. The rally set off down Melbourne’s main promenade after about 300 people congregated at Federation Square this morning to protest the government’s proposed carbon price.

Meanwhile, in Canberra, some 3000 protestors chanted “Tony Tony Tony” as the Opposition Leader took to podium, along with Barnaby Joyce, Browyn Bishop and Sophie Mirabella.

Back on the streets of Melbourne, reasons offered by the assembled punters for their public defiance varied from a belief that the government was acting against democratic principals by bringing in the tax to flat out denials of climate science.

Richard from Mount Waverley says the carbon price is “open to manipulation” and that Labor’s proposed compensation packages are a scam.

“We have taxpayer funded mouthpieces like Flannery and Garnaut spreading propaganda and it’s propaganda that bloody old Joseph Goebbels would be proud of,” he told Crikey.

Richard says he’s a climate sceptic who will keep fighting the carbon tax: “That (climate sceptic) is almost a swear word these days. When these people who are pushing this thing are pushing it on ignorant people, almost in the form of a religion, then maybe I should be called a heretic.”

“It’s just another tax that we’re paying that they don’t. It’s just gonna make it harder for us to survive,” he told Crikey this morning. “I can’t see how the unions in the party can support a government or party which is going to cut the throat of their own workers.”

David, a newly-signed Liberal member from North Point, says he is sick of the government lying to him. He doesn’t mind paying tax — “it’s not about paying tax, I love paying tax” — but hates being taxed for “no reason.” He’s not sold on climate change either.

“Life is about scepticism, we’ve got to keep an open mind. I would challenge the Left to say that they haven’t closed their minds on the subject. Hence the term ‘science settled no tax’, well ‘science settled’ is one that gets thrown out quite often by them and that to me indicates closed minds.”

Tony Abbott stood for “honour and integrity” by opposing the ETS and deposing Malcolm Turnbull, David said. He believed the opposition leader would keep his word and repeal the tax should he make it on to the government side of the chamber.

“It’s a tax on breathing. Putting a tax on which is going to produce no real tangible results, well that’s just madness,” he told Crikey. “Next the government will be taxing us for p-ssing.” 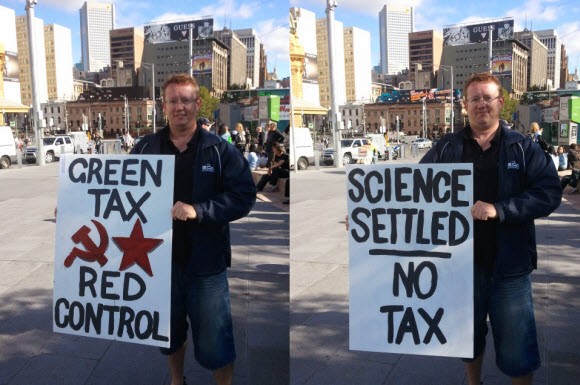 Caroline from Point Lonsdale has never participated in a protest march before. Her husband Alan hasn’t since the moratorium days. He isn’t necessarily against the tax, or a climate sceptic. He is however angry about the government not telling the electorate they would bring in a carbon price.

“Climate change is not the issue here. This is about the abandonment of a democratic principle, where a person can get into government by lying,” he told Crikey.

“This is a government saying ‘I know what is good for you whether you like it or not you’re going to get it’. That is a dictatorship, not a democracy. That’s what people are protesting about in Egypt at the moment.”

Unlike previous rallies, including the recent well-attended Save Live Music parade, Melbourne’s streets were not blocked for the march. Ian, a marshall for the rally, told the crowd before setting off that he was the man in charge with pushing the pedestrian button.

“Stay peaceful, there is no violence, there is no aggression,” he shouted. “If there are people here to cause trouble, we may ask people to stop. This is going to be a peaceful and orderly group. I will push the pedestrian button. We will cross with the lights.”

Then, the lights at Exhibition Street turned red and the crowd stopped. Now, in student politics, if a protest failed to stop the trams outside the State Library it was usually junked as a failure. But being stopped by a flashing red man was another matter entirely. “Please proceed in an orderly fashion”, a bearded man with sunken eyes intoned. “Don’t block the road”, added another.

Once huddled on the parliament steps in the sort of numbers Falun Gong might get on a busy Friday,  it became clearer as to who was being represented. The Citizens Electoral Council, blaming the Queen for the tax, were at one end. Next to them was the Liberal Democratic Party, led by a cherubic-faced lad who would later tell the crowd the young were revolting. 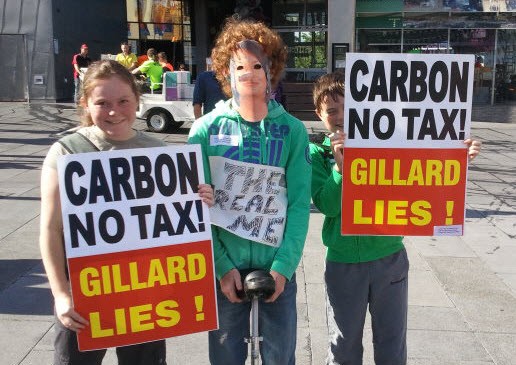 There were others from Queensland who had attached their own personal “authorisation” to their non-specific signs sledging the Prime Minister. And then there was the media, with Channel Seven’s Brendan Donohoe prowling for quotes and Aunty’s finest demonstrating an impressive way with shorthand.

After about 15 minutes of polite conversation punctuated by the occasional yelp about “liars” or “mandates” it was time to hear from the speakers. Tony Hooper, the self-appointed spokesperson for the group, started talking about the cost of living but no noise emerged save for some vicious feedback that had a woman toting a novelty Elvis bag reaching for the earplugs.

Soon, it was time for Les Twentyman — the keynote speaker.

“All they want to build out in the western suburbs is more jails…we don’t want more jails and we don’t want more coppers”, said Twentyman to blank stares from both the police and the protesters. Disheartened, Twentyman flicked the switch. “They said the  only way they were going to fit me into parliament is if I actually ran for two seats. So that’s why I wouldn’t have the lapband…maintain the rage.”

Alan Moran from the Institute of Public Affairs then talked about the “economic and political implications of the carbon tax.”

Back in Canberra, Tony Abbott told the crowd that Labor MPs were wrong to vilify the protesters as “extreme”.

“I do not see scientific heretics, I do not see environmental vandals, I see people who want honest government,” he said. He was cheered as he slammed the tax and called for fresh elections to test Labor on the initiative.

Crikey’s coverage of the No Carbon Tax Rally

An early Queensland election is Bligh’s to lose

The organisers in Canberra have the numbers at 3,000 but independent estimates have it at 1,000, no wonder they can’t understand cliamte science if they can’t do simple addition.

Why is it so hard for Crikey to put quotation marks at the beginning of paragraphs when people are, you know, being quoted? Please sort it out, it’s not hard.

Also does it strike anyone else as odd that Les Twentyman and Angry Anderson are speakers? What exactly is their knowledge of tax reform, economics or climate change? Or maybe they just have a lot of passion and that it what the anti tax side wants, don’t get bogged down in logic or science, don’t inform yourself, just get loud.

To be fair, there’s a lot of it on both sides. “What exactly is their knowledge of tax reform, economics or climate change? Or maybe they just have a lot of passion…don’t get bogged down in logic or science, don’t inform yourself, just get loud” pretty much describes most of the Australian Youth Climate Coalition.

And I’d love to know what the chap with the pro-nuclear power placard is doing there.