Ever hear anyone talking about the Gillard-Swan Government?

Kevin Rudd up to about 60% of mentions of the PM, and well ahead of Tony Abbott, as the media plays out a self-fulfilling prophesy of talking about how much Kevin Rudd is being talked about.

Historically governments have usually had a very high profile second in command/Treasurer — this one undoubtedly doesn’t — ever hear anyone talking about the Gillard-Swan Government? – and Kevin Rudd is filling the gap through his own activities and the fascination of the Press Gallery.

Kristina Keneally prepares to bow out on top — at least in terms of media mentions, pipping out Barry O’Farrell through a raft of “going down smiling/fighting” stories. Is it just me that thinks it’s pretty easy to seem resolute and upbeat in the face of defeat when your starting expectations are so very low

Chris Bowen and Scott Morrison the other main movers for obvious reasons, while Barnaby Joyce gets a bit of his mojo back with some choice lines about rogue polls. 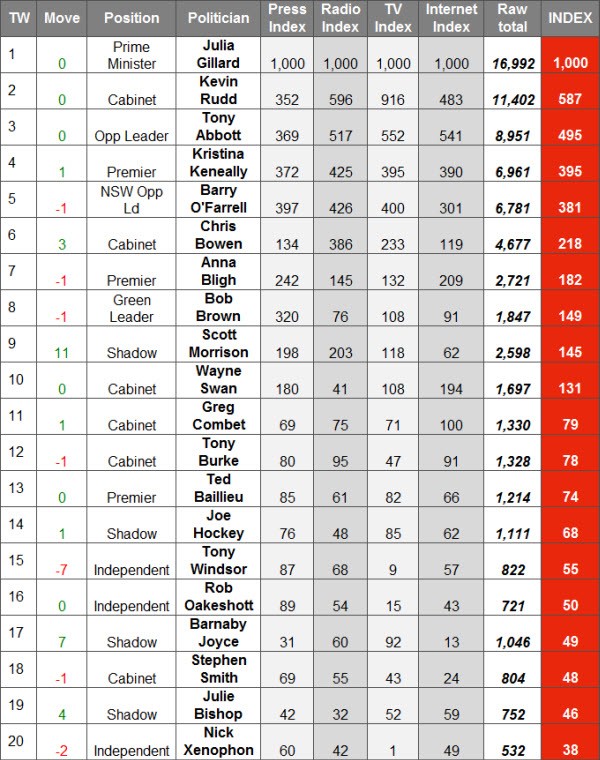 Julia Gillard comes right back to the pack as the anger on talkback continues to die down about the carbon price, Kevin Rudd and Chris Bowen taking over as key figures of discussion as the focus moves (mainly) offshore.

A big game coming up for Australian cricket and the World Cup itself, with either the dominant team of the past 20 years or the main host nation dipping out before the semis, but to read our media you’d almost think it was all just about one man…

I wonder, just wonder as Kevin Rudd is Foreign Affairs Minister and there has been sort of, a good amount going on in that area, earthquakes, floods, tsunami, the odd war, no fly zones, plus the usual FA bits and pieces, he may sort of, be in the news more than is usual. Just a thought.