The Australian poles apart on Newspoll

I guess when people look at opinion polls several years before an election they see what they want to see.

Seeing what we want to see. I guess when people look at opinion polls several years before an election they see what they want to see. Personally I see very little of interest. I mean, how can you make sense of a poll that has Labor’s two party preferred vote this year from 48% at the beginning of February, up to 50%, down again to 46% at the beginning of March and then to a clearly winning 51%?

That’s the story Newspoll in The Australian has told us this year. Hokus pokus and nonsense. It would be sensible of the politicians to mean it when they say they don’t take any notice of the polls.

The newspapers that pay for the garbage naturally feel obliged to take the findings seriously though and it is innocent fun to read the attempts to explain the fluctuations and what causes them. Jokes, after all, are good for the soul especially when they are written in such a dead-pan fashion.

But this morning in The Australian Dennis Shanahan provided us with a special source of merriment. Take a look at the findings on who would make the better PM.

Lest we forget. Is this man a joke and making a fool of the national daily The Australian? 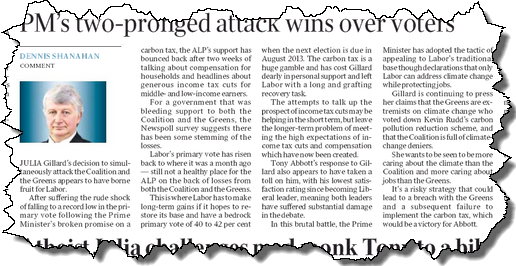 If you read Dennis Shanahan writing about the Newspoll of March 8 you would think that the Prime Minister and her government were history. Today’s Newspoll has Labor in a winning position.

Some excerpts, then, from the analysis of March 8:

Julia Gillard’s decision to announce her plan for a carbon tax from July 1 next year could be the political game-changer for her leadership, the Labor government and, most importantly, the future of climate change action in Australia. Every possible element to drive down the standing of the Prime Minister, her government and the climate change debate has combined in such a way that the political and social divisions in Australia that have been evolving for years have become palpable and public. …

The latest Newspoll survey has terrible news for Labor and the PM on the party and leadership front. With Labor at an all-time low primary vote of 30 per cent, it is cold comfort to argue there’s a lot of time to sell the carbon tax and recover before 2013. What’s more, the two-party-preferred vote of the Coalition’s 54per cent to the ALP’s 46 per cent would not only be a wipe-out for the Gillard government, it also highlights that they haven’t picked up “Greens-leaning” Labor voters. …

There’s still time for Labor but the government cannot continue to go backwards and hope to close the gap by July 1 next year.

Cannot afford to go backwards indeed. But seem what happens to predictions in a fortnight when you go forwards!

Doing it tough in Britain. The UK think tank the Institute for Fiscal Studies in a pre-budget look at living standards during the recession has calculated that in the three years from 2008 to 2011 real household incomes have fallen by 1.6% — the biggest three year drop in real living standards since 1980-83.

Given that over a typical three year period real incomes in the UK would rise by about 5%, the Institute concludes that households are about 6% worse off than they might have expected had incomes risen in the normal way. 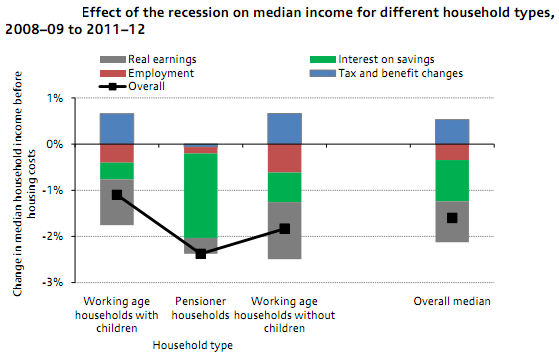 This would be the first five-year period in which median income before housing costs fell since the five year period from 1990 to 1995, and the largest drop in a five year period since the five years from 1972 to 1977. Key contributors to this are that earnings growth will not keep pace with inflation in 2012, and that more tax rises and benefit cuts will be introduced between 2012–13 and 2014–15 as part of the government’s deficit reduction package.

No saints and no geniuses in politics. A quote for the day:

My general view of politics and policy is that there are no saints and no geniuses; place too much faith in anyone, and you’re bound to be let down. But there are villains, and they need to be fought.

– Paul Krugman writing on his The Conscience of a Liberal blog.

Too true, they spend all that money on these polls, then let some “prejudiced hack” loose to “sort through the gizzards”, giving us a blow by blow-hard account of what “they say”? Treating them like “fortune cookies”.
Then they get sniffy when someone treats them with “due deference”?

Shanahan couldn’t interprete any poll that favors Labor, in a good light. It’s in his DNA.

For how many years have we been laughing at Dennis and his psephological shehanigans?