We're all for pollies getting on the Twitter, it provides them a chance to show a more human side to that tough Canberran exterior. Except when the 140 characters are typed in caps lock. Plus, other media news...

Oakeshott’s Twitter fail. We’re all for pollies getting on the Twitter, it provides them a chance to show a more human side to that tough Canberran exterior. Except when the 140 characters are typed in caps lock, then it’s guaranteed to be ignored.

So it was nice to see Independent MP Rob Oakeshott earnestly apologise yesterday for his ignorance when it comes to loud tweeting (an apology which has subsequently been removed). Now if he’d only stop issuing the press releases and start to #tweetliketonyburke. — Tom Cowie 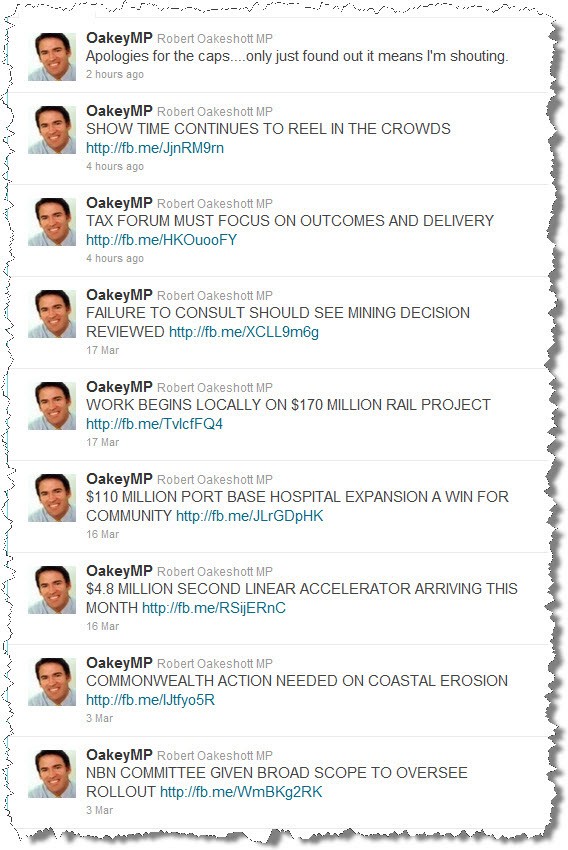 Libya, banana republic. A great photo on the cover of The Age today, showing a Libyan rebel running for cover with a row of bombed out cars behind him. He flees with a gun in one hand and … a banana in the other. Yes, a banana. Obviously the banana crisis isn’t affecting Libya. Also good to note rebels are keeping potassium levels up. 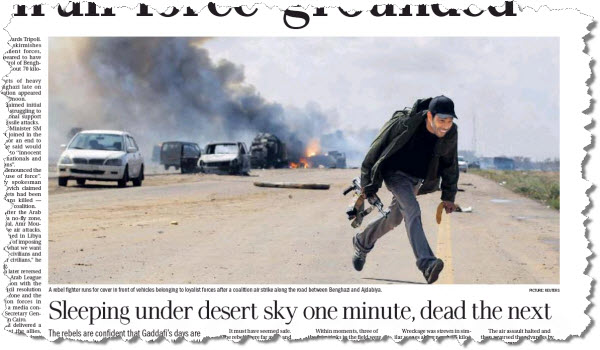 Front page of the day. The Independent — brilliant and haunting: 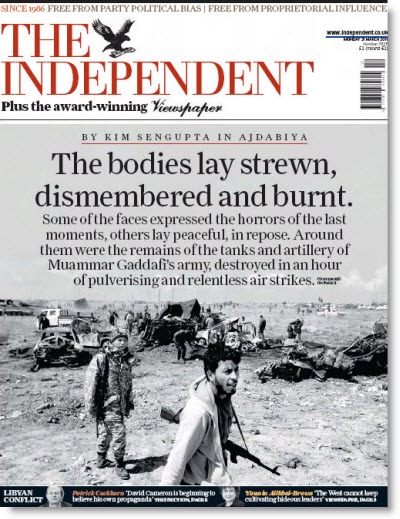 “The Libyan government has released four New York Times journalists six days after they were captured and detained. The four journalists were arrested by pro-Gaddafi forces last week while covering the unfolding conflict in the east of the embattled country.” — The Guardian

“The Audit Bureau of Circulations has merged its print and digital distribution arms into one single brand: ABC. They say the re-organisation – which has been a year in the planning – will help simplify how publishers report their circulation figures across multiple platforms.” — Journalism.co.uk

“NPR, reeling from an undercover sting that cost the network its chief executive and a chunk of its credibility, is facing the biggest threat in its 41-year history.” — Newsweek

“In celebration of its fifth birthday, Twitter has launched a new website and a new video featuring some of its most prominent users.” — Mashable

but bananas are radioactive.. so maybe the rebel should not eat them?

Of course he’s shouting, he’s a politician. Now if only he’d shout a round. He removed the apology, does that mean he’s not sorry he shouted? Mixed messages.

Is it actually a banana? I admit it looks like one, with black spots even, but the man seems to be holding it oddly with most of it outside the fist. Could it be something else? It seems unlikely that bananas would still be getting to Libya in the middle of a civil war.

funny banana joke, I’ll call my family in Benghazi and tell it to them, they sure would laugh

The haunting mysterious image of Libya and the question that most needs to be answered,