Move to the centre but not past it

I am a firm believer that a successful political leader moves to occupy the centre ground of public opinion on any issue.

Move to the centre but not past it. I am a firm believer that a successful political leader moves to occupy the centre ground of public opinion on any issue — see my Claiming the centre comment in Crikey last Thursday. For a Labor Prime Minister that often means edging towards the fringes of Labor Party opinion but there is a danger in moving too far.

Julia Gillard, it seems to me, is moving too far. Stories like this one in The Australian this morning suggest she is trying too hard to appease the socially conservative Catholic element within Labor:

Julia Gillard has revealed herself to be a cultural traditionalist, indicating she will oppose moves by the Greens for euthanasia and gay marriage laws and that she believes it is important for people to understand the Bible- despite the fact she is an atheist.

Certainly on euthanasia, and probably on gay marriage, these views put the Prime Minister well outside the mid-point of public opinion. Her attitude might delight the national officials of the Shop Assistants Union and the controllers of the NSW right who put her into the job, but they risk further alienating the kinds of Labor supporters who have recently shown a willingness to switch their votes to the Greens. Thus the PM’s approach somewhat perversely makes it even more likely that future parliaments have even more socially progressive members.

Free to say no but he can’t say yes. Treasurer Wayne Swan was standing on his dignity this morning as he reacted to an Australian Financial Review story that suggested he is about to reject a proposed merger between the Australian and Singaporean securities exchanges. “They are entirely speculation,” he told ABC Radio.

Treasurer Swan told Radio National he has not yet made a decision on the deal.

“Not at all, I’ve no idea where those reports come from, they are entirely speculation,” he said.

“The final decision maker here is the Treasurer – I will take my decision based on the evidence before me, based not only on the recommendations of the Foreign Investment Review Board – I will do all that without any outside influences upon me whatsoever,” he said.

Which is all well and good but the final say will not be the Treasurer’s. To proceed, the takeover requires changes to legislation and the AFR was right in pointing out that the numbers are very much against that happening. To succeed when Mr Swan does make up his mind (and the FIRC has 120 days to make a recommendation to him), and if he does say yes, the two Coalition parties will have to be more interested in supporting the section of the big end of town that would love to cop the Singaporean cash than in gaining votes.

Public opinion is very strongly against the takeover and as a betting man I would be putting my dollar on Liberals and Nationals choosing to go with public opinion if Wayne Swan is silly enough to give them the opportunity of doing so.

It was all that McCain man’s fault. Sarah Palin clearly does not suffer from false modesty. At the weekend she spoke in New Delhi at the Tenth India Today Conclave 2011 on ‘My Vision of America’ and declared that the reason why the Republican ticket failed to win in 2008 was because she wasn’t at the top.

In the nearly hour-long speech, she discoursed on energy politics, her home state of Alaska and the 2008 US presidential campaign.

The one point where Palin was applauded was when she talked about the mainstream media.

Asked why her team lost the 2008 elections, she said it was because of the media, quickly clarifying that Barack Obama came better off as an “agent of change”.

When questioned whether she could have been an agent of change, she retorted: “I was not at the top of the ticket.”

Protect our cheese. At least they care in some countries about protecting their regional good name. From today’s UK Independent: 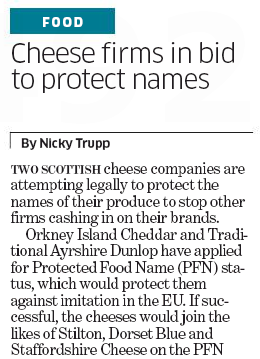 … it occurs to me that when the definitive history of the Fukushima Daiichi accident is written, there will be a tally of casualties and fatalities at the end of the book.

I firmly believe that the fatalities will be dominated by iodine poisoning, self-administered by people in countries not exposed to emissions from the plant.

With regard to Prime Minister Gillard. She realises only too well that she was not only given the job by De Bruyn/Ludwig, but that they can just as easily take it away. As long as this cabal runs Labor, it cannot be the party that mirrors its own written objectives.

I’m no fan of Sarah Palin, but she was saying that she could have been a more effective agent of change at the top of the ticket, which I think is true. I don’t think she was claiming that she would have won, based on your quote from her.