Sky sets the agenda, The Australian declares. Plus, Crikey's front page of the day and other media news from around the globe.

Sky sets the agenda, The Oz declares. The following byline-free article — headlined “Political TV that sets Sunday agenda” — appeared on The Australian website yesterday afternoon. We believe it speaks for itself…

AUSTRALIAN Agenda on Sky News set the pace for Sunday political television today with an in-depth interview with Julia Gillard.

Watch the video above and Cassidy’s interview with Emerson here and decide for yourself.

Front page of the day. Glasgow’s Weekend Evening Times front page from the weekend is a classic. Scary mouse and all… 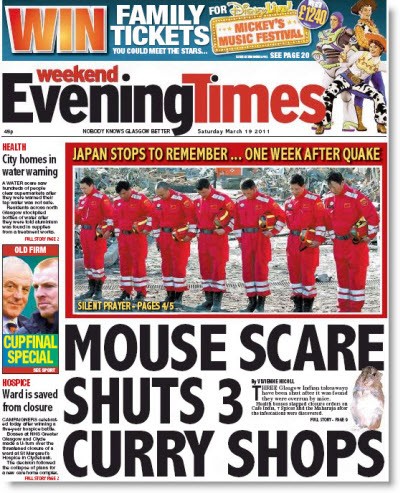 “The BBC World Service is to receive a “significant” sum of money from the US government to help combat the blocking of TV and internet services in countries including Iran and China.” — The Guardian

“When the New York Times puts up its paywall later this month, it will be the fifth newspaper among the top 50 by circulation in the U.S. to charge for online access; a sixth, its sibling Boston Globe, is expected to do so later this year.” — Paid Content

“Mohammed al-Nabbous, a young Libyan journalist who launched a Web channel that helped generate public outrage against Gaddafi over the last several weeks, was killed in the attacks that pro-Gaddafi forces carried out in Benghazi Saturday.” — France24

Why bad journalism has driven me to desperate ends

“In retrospect, I should have had this idea before, but I guess today I just hit critical mass (not sure if it’s appropriate to use a nuclear energy turn of phrase here): one too many pieces of bad journalism. So I decided to start a wiki Bad Journalism Wall of Shame and invite some of the other people who were frustrated with some of the shoddy, alarmist, and shocking wrong journalism we’ve seen since last Friday’s Tohoku quake.” — A perfect lover has no memory