After a week of violent protests on Christmas Island, it's clear the federal government is facing a humanitarian crisis with no clear resolution.

After a week of violent protests on Christmas Island, it’s clear the federal government is facing a humanitarian crisis with no clear resolution.

More than six thousand people are languishing in immigration detention — some for more than a year — but it was the sight of Australian Federal Police members in full operational gear taking on a group of rock-throwing asylum seekers which really brought it home. Both sides are in agreement, something needs to be done and fast.

But as always, the federal government is also facing a crisis of perception. To appear tough, without being cruel. Humane without being weak. But when the boats keep coming and the strain begins to show it becomes increasingly difficult to play both sides of the game.

The solution to the detention problem, of course, is unclear. Offshore processing, trumpeted loudly pre-election by the Rudd/Gillard government via the East Timor solution, has fallen off the radar. East Timor doesn’t appear to have the capabilities to shoulder the burden, while regional cooperation, also spruiked by the Prime Minister during her recent Asia jaunt, seems to lack the political will required of our partners.

Community detention, also an emotional minefield due to the NIMBY attitude, seems to be one method the government is willing to try in the hope it will help ease the strain on the overloaded system. Although you won’t hear them shouting it from the rooftops.

ASIO are clearly a problem. Criticism is mounting on the secretive spook agency for the length of time taken to process the required security checks for arrivals. The figures speak for themselves — there are are currently more than 900 people in detention who have been granted refugee status but are still waiting for their security check. Apparently ASIO have cut a deal with DIAC to speed up processing.

The Age are reporting this morning that the Department of Immigration and Citizenship is working on a proposal to transfer thousands of single men in detention facilities waiting for their check to a form of community detention. DIAC would not comment on the potential for a new visa category, while the Minister’s office pointed to Chris Bowen’s pledge to move most children out of detention centres by June this year as the main priority.

Last June, Australia agreed to take 500 refugees in the hope it would discourage asylum seekers from taking to boats.

The Commonwealth Ombudsman has said Christmas Island is unsustainable. The Australian Human Rights Commission wants it shut down. The UNHCR are not keen on mandatory detention full stop, let alone on an island 2,600 kilometres from the nearest capital city.

Whatever the government chooses to do, they best go about it quietly. Unless they want coverage like this: 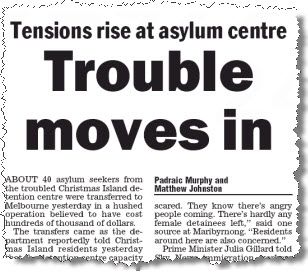 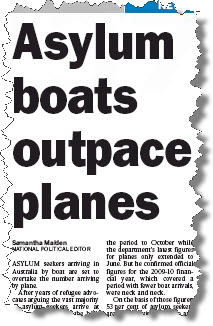 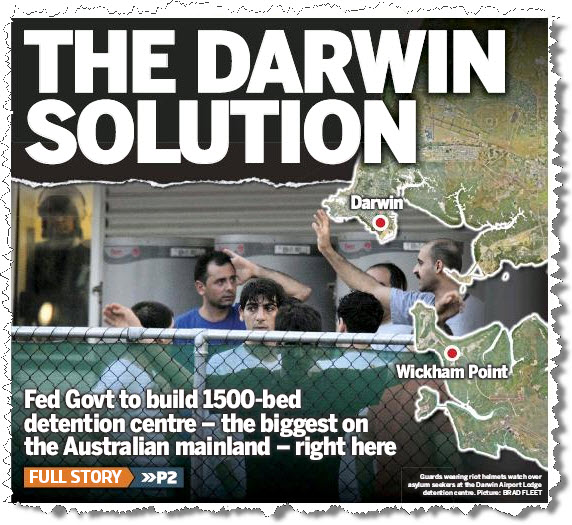 Typical of this govt, all smoke and mirrors. If I recall, the first Julia (as opposed to the real Julia) stated that these illegals would not be brought to the mainland (not to mention being released into wide stream Australia). Ar could it be another LIE, perhaps she needs to acknowledge that their so called policy is another FAIL to add to their shameful record. The real j-U-LIAR should be renamed passion fingers – what ever she touches she F–Ks. Alternatively Kevin 07 (or is that Kevin Lemon, or perhaps Kevin Armageddon – so many to choose) should replace her at the helm, at least there was only one of him.

Dilemma alright!
We have bipartisan support for mandatory detention of people who seek asylum , but only if they come by boat and not by plane. In the post september 11 2001 terrorist attack on tthe USA, we in Australia chose to protect us from the same by making ASIO responsible to confirm asylum seekers are not terrorists. Immigration officers assess the protection claims , check for civil or war crimes etc, and determine case by case refugee status. DIAC then waits for ASIO to do a national security check, what ever that is, and ASIO after an increasing length of time find 99% of DIAC’s decisions were correct.

Hardly risk management is it, or good husbandry of the nation’s resources.

It is however exceedingly damaging to human beings to keep them in a state of not knowing their future, a state of idleness when they would grab the chance to work for their keep and provide for their dependants. Since last August, five deaths in Immigration detention custody- four of them suicides. The latest, a 20 year old Hazara had lost all hope , it is said, after about nine months in detention. The Scherger detention centre would have to be the most geographically isolated in Australia with the mining town of Weipa 30 or so kms away, dirt road, Wet season and 850 km from Cairns.

What was it that Prof Patrick McGorry said on being anounced Australian of the Year 14 months ago? DETENTION CENTRES ARE MENTAL HEALTH FACTORIES? For ten years the psychiatrists and other medicos have said do not do this to innocent children or women or men because it makes them sick. Maybe for life. Detention without a reasonable ( 90 days?) end date is the problem , when all you really need is a place to receive and register , health and initial security check them and treat them the same as plane arriving asylum seekers. Other civilised countries do this.

It is a matter of identification – come with papers to prove your identity and consideration should be given to “priority” processing – no papers then sorry, off to the gulag you go. That is the fundamental difference between boat and plane.

Lorry, and the people who fled in fear,who have no identity papers, never had them, just like the traditional owners of this land?

You wouldn’t keep them in the gulag indefinitely though, would you, if they are illiterate throught no fault of their own and and tell with graphic detail their horrific story of persecution, show their scars etc? all of which falls into place if they are members of an ethnic group or a religious group or a political group that is known from other reputable sources to being actively persecuted, wiped out?

Any idea what the Migrant Alert List or Country Information or the Interpol data bases looked like before computers? How was the assessment made before that era?

Thirty years ago if you were born in Vietnam, were Christian or ethnic Chinese or anti communist, and you came by boat or were selected off shore where the boats stopped and resettled from the refugee camps in Malaysia or Indonesia you were a refugee, papers or no papers.

I suspect the Government have been using extended detention as a form of Howard style deterrent. Given the continuing arrivals you might think that it is not working.

The Government said they would process claims within 90 days and failed to do that, in the process they have massively over crowded the Xmas Island facility.

The issue I think is establishing a balance between our national interest and the humanitarian interests. After all everyone who turns up on a boat is one less we take from a refugee camp.

I think we could consider whether changes to visas might stem the flow ? How about a 2 year visa , a probation during which we can establish if the refugee returns to their home country or generally turns out to be a bad egg, add to that maybe a visa of between 1- 3 years where there might be a turn around in the problem, eg, Sri Lanka.

It still begs the question why we accept asylum claims from people who have already been in another country en route here .

As a true believer I figured I wanted a beating from both sides!