Crikey says: by boat was a bad choice

For decades now, Australia's asylum seeker policies have been built to cater to certain perceptions.

For decades now, Australia’s asylum seeker policies have been built to cater to certain perceptions. Millions of dollars have been spent on detention facilities and offshore processing centres to cater to the perception that people who arrive by boat are a threat, when the well established reality is that the majority of asylum seekers come by plane, on valid visas, who then later apply for asylum.

Those who enjoyed a bag of peanuts and perhaps an in-flight movie to get here are afforded the luxury of staying in the community while their claims are processed. Those that risked death get detention. This is despite the fact people who chose the wrong mode of transport (as if choice comes into it) are more likely to be recognised as refugees than those who have arrived by air.

But re-educating the public once you’ve catered to the idea that boat people should be locked up is very hard to walk back from. And sometimes, quite often in fact, it’s politically palatable to play to that fear.

But while talkback has lit up over boat arrivals, the Christmas Island crash, the subsequent funerals, and the latest riots, the Gillard government remains quietly committed to meeting its June deadline of no women and children in detention. They’ve cut a deal with ASIO to process claims faster, last June they agreed to take 500 refugees from camps in Indonesia and, according to The Age today, it’s “considering introducing community detention for thousands of asylum seekers languishing in detention centres while their refugee claims are finalised”.

But rest assured, if the Gillard government has the guts to tackle this entirely sensible policy move, they won’t be trumpeting the news. Why? Headlines like this: 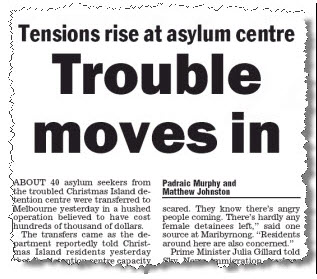 As long as there’s a media machine to keep feeding the public’s perceptions, the government’s job will be all that much harder.

Donate to Amnesty International, they’re running a campaign to counteract the kind of crap our MSM currently delights in on this topic.

Would boat people get locked up if they had a valid visa? Perhaps it is the lack of a valid visa (which I assume is illegal) rather than the mode of transport that is the problem.

You don’t need a valid visa to ask for asylum, you just need to get here!!!!! So in answer to your comment, it isn’t the lack of a visa that is the problem……

Crew, there has never been a reason offered.

We claim always that we are not locking them up because they came by boat.

They always claim it is for processing but that takes this long:

QUESTION TAKEN ON NOTICE
SUPPLEMENTARY BUDGET ESTIMATES HEARING: 19 OCTOBER 2010
IMMIGRATION AND CITIZENSHIP PORTFOLIO
(175) Internal Product: Refugee, Borders and Onshore Services Division
Senator Cash asked:
Please provide an assessment of the resources required by the department to
process the application of an offshore humanitarian applicant compared to those for
an Irregular Maritime Arrival (IMA)
Answer:
The processes required for the department to process offshore humanitarian
applicants compared to irregular maritime arrivals are significantly different. Each is
briefly described below with the applicable minutes allocated through the
department’s internal funding model.
Offshore special humanitarian program entrants are proposed by eligible onshore
residents who lodge an application onshore, which is then assessed and either
referred to the relevant offshore post or refused. Referred applicants are interviewed
and, if successful, health and security clearances are completed prior to applicants
being settled in Australia. The relevant average funded work effort for each stage is
listed below:
• assess and refer – 212 minutes per case
• offshore processing including interview – 5020 minutes per case
Irregular Maritime Arrivals (IMAs) are entry interviewed on arrival at Christmas Island,
allocated an Immigration Advice and Assistance Scheme (IAAAS) provider, asked to
lodge a statement of claims, interviewed during a Refugee Status Assessment (RSA)
and, if found to be a refugee, asked to lodge an application which is processed
before the client is settled. The indicative and estimated funded work effort/costs for
each stage are listed below:
• entry interview – 200 minutes per case
• IAAAS provider – 180 minutes per case
• RSA process – 926 minutes’ per case (based on the onshore protection
equivalent process)’

I suggest a very depressing book I have just read called Border Crimes by Michael Grewcock which explains in shocking detail how we got from agreeing to a humanitarian treaty and enshrining it in law to then making the jump to jail the very people we legislated to help. The law is thus but we simply ignore it.

62 The Refugees Convention implicitly requires that, generally, the signatory countries process applications for refugee status of on-shore applicants irrespective of the legality of their arrival, or continued presence, in that country: see Art 31. That right is not only conferred upon them under international law but is also recognised by the Act (see s 36) and the Migration Regulations 1994 (Cth) which do not require lawful arrival or presence as a criterion for a protection visa. If the position were otherwise many of the protection obligations undertaken by signatories to the Refugees Convention, including Australia, would be undermined and ultimately rendered nugatory.
63 Notwithstanding that the applicant is an “unlawful non-citizen” under the Act who entered Australia unlawfully and has had his application for a protection visa refused, in making that application he was exercising a “right” conferred upon him under Australian law.”

Then we blame ‘people smugglers”, I had a long debate with John Cleary and Bill Ledbetter about it last night on ABC radio – Cleary suggested we hunt down these phantoms and punish them for daring to make money or give refugees a ride.

He ended up promising to check out the actual law and protocols which clearly state that giving refugees a ride is not people smuggling.

How we got to this is not hard to figure out – Grewcock clearly shows the lazy paranoia that infests all parts of the polity all the way to the High court.

Well any half-smart Aussie knows what a freaky panic our ‘country’ (thing with boarders) gets into when 25 or 30 ‘boat people’ arrive offshore (Christmas Island), it poohs its pants, and how a particular group of would-be national leaders feign panic just to lead panic.
Well how would this – gods own lucky country’s leaders (and would-be’s) cope with hundreds of thousands of boat people arriving overnight as they did at Tunisian and Egyptian boarders.
They would drown in their own diarrhoea as their pants filled up.