NSW election: (not so) private member’s bill takes on a new meaning

Having been thrown out of the NSW Electoral Commission last week for stripping down to a bow toe and G-string for the election’s Upper House ballot draw does not appear to have daunted Nudist Party candidate Stuart Baanstra.

The “passionate” n-ked rights campaigner alarmed his fellow postal workers when he cycled to work this week in his launch outfit with nothing further to protect his modesty than a bike helmet and a backpack supporting a home-made election poster saying, “Vote Stuart Baanstra for N-de Rights”. 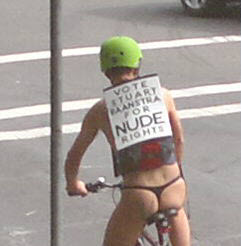 Baanstra, who told Crikey he intends it to be his costume de campagne up until and including election day, then tried to gain entry to work at the Strawberry Hills Postal Centre, but was refused access and told to go home and change if he wanted to deliver mail to the good citizens of Sydney’s inner suburbs.

A fellow worker snapped Baanstra — whose platform for the March 26 election is “the right to live without clothes, anywhere, any time” — back on his bike heading out on the campaign hustings.

The sight of the 48-year-old leader and sole member of the Nudist Party in his buttock-baring outfit is not the only thing that will startle members of the NSW Parliament should Baanstra be elected.

Apart from intending to file a private member’s bill to change the Summary Offences Act so that the people of NSW may “as a society have the right to live without clothes”, Baanstra’s legislative wish list is an ordinary politician’s nightmare.

He wants all MP salaries cut to the average wage of $59,000, MPs’ superannuation cut back to the same scale as ordinary workers, no more state fleet and MPs to take public transport, no more free travel for parliamentarians, or their partners and an end to the daily $75 meal allowance.

Baanstra previously came to notice when he was prosecuted for refusing to fill out the 2006 Australian Census, saying he represented a group called Community Action Against Homophobia, which objected to the census rendering gay marriage “invisible” by classing it as a de facto relationship.

Asked whether his plan for a n-de NSW, including the eye-watering idea of a n-ked Barry O’Farrell and his cabinet starkers in the bear pit on Macquarie Street, might not be too much for the live website cross, Baanstra said that other people, not he, had “body image issues”.

If elected Baanstra might wear his G-string and bow tie combo for his first day in the Upper House, “but it depends on the weather”.

Some mothers do have ’em.

Damn. Already cast my vote – wish I knew about some of this guys policies sooner! I’d vote for him just on the basis of abolishing state governments alone.