War of words over Australian profits, losses ... Mum’s the word on bully boy ... Mixed messages at the SMH ... Front page of the Day and more ...

Mum’s the word on bully boy. A schoolyard bully’s family was hung out to dry by Channel Seven and much of Rupert Murdoch’s press this week, when footage of a school yard bullying incident, originally posted to YouTube, made national news. And yesterday The Daily Telegraph provoked further public outrage with its story: “Bully’s Angry Mum Wants Victim To Apologise“.

More than a hundred readers expressed outrage in comments posted to The Tele’s Facebook page. Some of the readers accused the “bully’s” mother, Tina Gale, of being a bad mother .

Except The Tele got it wrong. Apparently Ms Gale had in fact wanted her son to apologise to the victim. Last night the paper came clean, posting: “Clarification – an apology to Tina Gale.” Still, despite the retraction, the original article remains online. — Crikey intern Rhiana Whitson

Mixed messages at the SMH. A Crikey reader sent this through after perusing the SMH last night.  Well at least you can’t accuse of them of carrying advertorials… 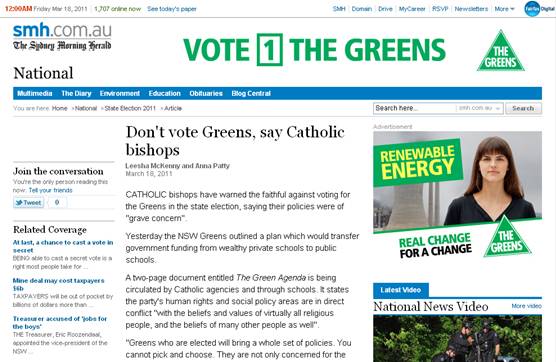 Front page of the Day. The Guardian captures the sombre mood of reporting on the latest from Japan with this beautiful and haunting photograph: 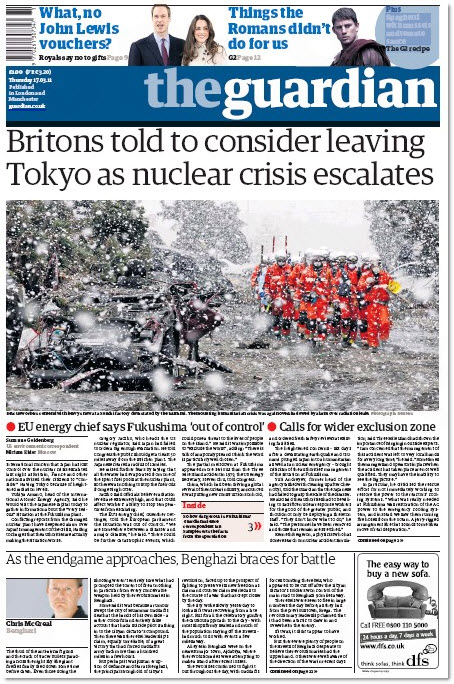 Tasmanian Mercury axes staff canteen, staff may be next.

“This week, it was announced the staff canteen would be closing down too, at least temporarily. The canteen was once the thriving heart of the building where journos, ad reps and the like met to grab a coffee or a sandwich between jobs. Now it’s like an abandoned movie set. There’s an awful poignancy to the stillness. The editors on the chopping block fear for their jobs and their families. Those facing the axe are career journalists with vast experience in Tasmania, interstate and overseas. They have worked 10, 20, 30 years and beyond to become editors in charge of designing pages and checking and editing stories for legal, factual and grammatical errors.” — Tasmanian Times

“Fresh off a new round of righteous indignation sparked by a hidden-camera sting, Republicans voted Thursday to block NPR from receiving any federal grants. The measure passed the House 228 to 192. During the passionate debate, which was sometimes punctuated by ‘boos,’ Republicans characterized the resolution as a budget-cutting measure while Democrats said the effort was a blatantly partisan attack on a popular and important news and information service.” — The Atlantic

NBC reporter reveals he’s been contaminated by radiation in Japan.

“NBC reporter Lester Holt — who’s in Japan covering the earthquake and tsunami — made a semi-startling revelation on Wednesday’s Today show: he’s tested positive for increased levels of radiation.” — The Blaze

“One of Scotland Yard’s most senior police officers has offered to face new questions from MPs over allegations that he misled parliament over the phone-hacking scandal at the News of the World.” — The Guardian

“The board of News Corp (NWSA.O) has been sued by shareholders for agreeing to buy a business owned by Chairman Rupert Murdoch’s daughter for about $675 million, according to a lawsuit filed on Wednesday.” — Reuters