This week's Wankley goes to the crack scribes at Melbourne tabloid the Herald Sun for their campaign of Grand Prix boosterism in the face of mounting evidence that Ron Walker's baby is a total turkey.

This week’s Wankley goes to the crack scribes at Melbourne’s Herald Sun for their campaign of Grand Prix boosterism in the face of mounting evidence that Ron Walker’s baby is a total turkey.

The four day farce is set to cost Victorian taxpayers a whopping $70 million this year, with ticket sales struggling to make it anywhere near the multiple six figure region that the Grand Prix Corporation usually suggests is its “attendance”.

But those facts have been granted short shrift in the Hun, with article after article imploring Melburnians spend up big for tickets sold exclusively by the News Limited-owned Foxtix (booking fee: $4.50). The paper maintains its own special website dedicated to puff pieces and something called a “Grand Prix Glam gallery”.

Our favourite yarn so far has been this effort last Saturday from fashion reporter Emily Power on who wrote in the paper’s “news” section that “the face of the Formula One Qantas Australian Grand Prix stepped on to the track ahead of the big race in fashion to get pulses racing”, alongside a photo of model Ashley Hart splayed on a Porsche. 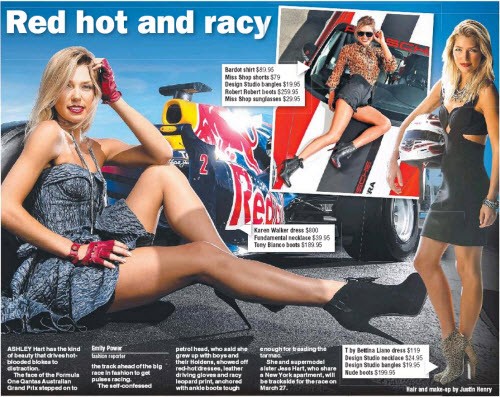 Crikey understands the Grand Prix’s advertising budget is about $11 million this year, and the related coverage in the country’s top tabloid is looking like money well spent.

On January 29, in response to Lord Mayor Robert Doyle’s gentle scepticism over the race’s economic benefits, the paper ran a story, “Love it or lose it warns F1 supremo“, which quoted Walker trumpeting “$160 million” in economic benefits and “free advertising to 300 million people in 132 countries”. The next day, under the headline “There’s grand value in race, says Walker“, the number of global TV viewers had suddenly ballooned by 50 million to 350 million. Crowds on race day were apparently “119,000”, making it “the biggest single day sporting event in Australia.” The economic benefits were apparently “$100 million”.

But as Crikey has repeatedly noted, the crowd figure is basically a trumped up guesstimate with the event failing to install bar-code scanning technology that would reveal the true, disappointing figure.

And the TV viewership, as Greg Baum noted a few weeks ago in The Age, is a total of 527 million for a calendar year’s 19 races. Melbourne’s share of that is probably about 20 million, or 5.71% of Ron’s brainwave.

And it appears Walker, and the Herald Sun, appears to be deliberately confusing the economic benefits with the economic impact. The “impact”, of course doesn’t have any of the taxpayer costs stripped out, which last year topped $50 million. Note that the Herald Sun would have been aware of that arguments but chose not to report them.

Amusingly, there has been much scanter promotion over at Fairfax. Walker’s Grand Prix Corporation famously arced up over an award-winning Ben Doherty and Josh Gordon piece when he was on the Fairfax board, with Andrew Jaspan then attaching a ridiculous 200-word “clarification” to the piece. Walker, of course, resigned last year, re-opening the floodgates for some frank and fearless reporting.

Never ones to ignore a breaking story, the Hun went big this morning with an “u-turn” from Lord Mayor Robert Doyle, who has apparently decided to attend the event despite an earlier pledge to ignore it. Seems local business mates had convinced him to show his face in the marquee to do his bit for the city. He’ll no doubt do his best to avoid cranky GP spruiker Bernie Ecclestone who, as yep, the Herald Sun reported on Wednesday, “still valued the Australian Grand Prix as much as the signature European races.”

At Fairfax, Ecclestone was “pondering the end of the affair.”

you wouldn’t think there was a payback in the Age’s reporting because (a) it’s a Herald Sun sponsorship event and (b) the Ron Walker factor?

Why Didn’t Ronny Walker get his Nuclear Buddies to cough up some money for Advertising ???? or his money ??