“thetelegraph.com.au is cleaner, easier to navigate and showcases the influential journalism of both The Daily Telegraph and The Sunday Telegraph with brilliant new digital tools. 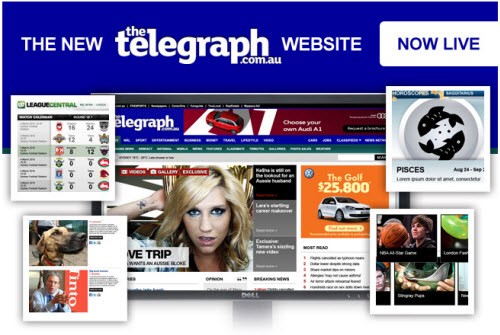 Judd asks staff what they think. Readers are already letting him now: three of five comments were mostly positive when Crikey checked in, but “Kevin Kebab” reckoned it “looks terrible!!!!” and “Hmmm” confessed to being “confused and scared”… — Jason Whittaker

Newspaper front page of the day. Today, Crikey launches a regular edition to Media Briefs where we trawl the world’s newspapers and choose one as our “front page of the day.” Now we tried hard, we tried so damn hard not to have the NT News as the inaugural winner. But how — just how — can you compete with this? 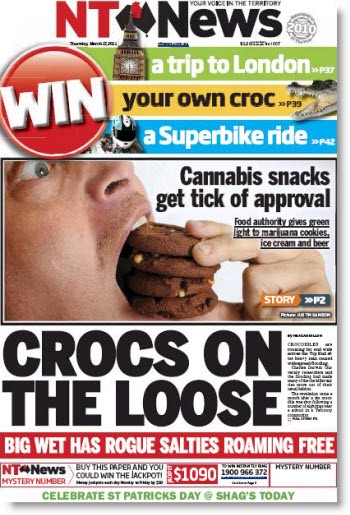 “The missing journalists are Anthony Shadid, the Beirut bureau chief and twice winner of the Pulitzer Prize for foreign reporting; Stephen Farrell, a reporter and videographer who was kidnapped by the Taliban in 2009 and rescued by British commandos; and two photographers, Tyler Hicks and Lynsey Addario, who have worked extensively in the Middle East and Africa.” — New York Times

Al-Ahram finds a new voice for a new Egypt

“Al-Ahram, founded in 1875, is one of the oldest newspapers in the Arab world. But in recent decades, the state-owned daily became a symbol of the nepotism, corruption, and incompetence that ails many institutions in Egypt. That is, until Feb. 12.” — Newsweek

“The Washington Post’s website got a fancy new redesign. Now all the headlines are in serious-looking black text instead of frivolous blue and Ezra Klein’s RSS is broken, I think. But the biggest news is that their opinion section — the worst opinion section in America — is now divided into two tabs organized by ideology. The columnists are now split into “left-leaning” warmongering Beltway-lifer hacks and “right-leaning” warmongering Beltway-lifer hacks.” — Salon

“The BBC is wasting nearly £80m a year through poor management of under-performing staff and erroneously paying a salary top-up to thousands of employees who do not qualify for it, an internal report has concluded.” — The Guardian

How The Detroit News sold its soul

“Scott Burgess resigned today as The Detroit News auto critic after his editors bowed to a request by an advertiser to water down his negative review of the Chrysler 200. This is why we can’t have nice reviews anymore.” — Jalopnik

NT News: Don’t go to too much bother trawling other eye-boggling headlines, Crikey, in that respect the NT News has the quality of a Bentley.

Incidentally, the featured bloke looks like he’s snacked far too much already.