The latest in the Guardian v WikiLeaks, the scary nuclear graph on Nine News is a hoax, Fairfax sued for one billion dollars and other media news.

Guardian v WikiLeaks. Guardian writer David Leigh — point man on that paper’s increasingly furious triple backflip on Julian Assange — added another achievement to his illustrious career when he created his own Twitter meme overnight. Debating whistleblowing via Twitter, the unctuous Leigh (@davidleigh3) produced a tweet remarkable even by social media’s self-obsessed standards, declaring “I like to think that if someone like #bradleymanning had first dealt with me at the #guardian, he wouldn’t now be in jail”.

So there you have it, if only Manning had given the material straight to Grauniad rather than the evil WikiLeaks, he’d still be breathing the air that free men breathe rather than standing n-ked in a cell while Barack Obama insists there’s nothing out of the ordinary going on and sacks his State Department spokesman for saying otherwise.

But while Niall Ferguson was making way for a new player in the counter-factual history field, Twitter was alive with its own version of Leigh’s tweet, started by several Irish tweeters:

@skdadl I like to think that if @davidleigh3 had been at Versailles in 1789, there would have been cake for everyone.

@dexter_doggie: I like to think that if @davidleigh3 had been on the Titanic, he’d have melted that iceberg with his blazing hotness

@skdadl I like to think that if @davidleigh3 had been there on the 1st Ides of March, Caesar would have promised a renewed republic.

@x7o Marry, I warrant had he been there, the crown were proffered a fourth time, and Caesar had ta’en it.

Interesting not so much for his patronising of “the kids” but for the fact that Leigh appeared to be trying to link Manning’s arrest to WikiLeaks. And it was Adrian Lamo who did the same thing in his recent interview with Al Jazeera, in which the clearly well-medicated former hacker claimed Manning had been “led on” by Assange. That’s a crucial claim that could see Assange indicted for the capital-offence Espionage Act, but denied by Assange and, for that matter, US military sources.

Scary nuclear graph on Nine News a hoax? Last night’s 6pm Nine News in Melbourne carried the background graphic of — what viewers could have judged to be — a potential radiation fall out “cloud” that stretched from Japan to the west coast of the US. 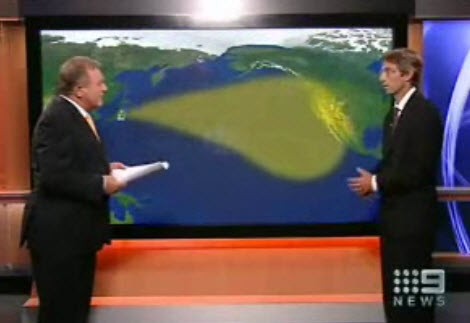 But where did Nine get this graph?

It wasn’t from this image that was doing the rounds on Twitter over the weekend was it? An image that carried the logo of Australian Radiation Services: 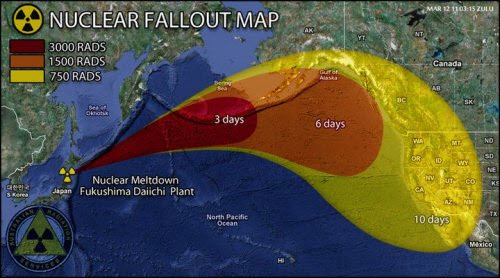 “Australian Radiation Services is aware of information about radioactive contamination being spread from the Japanese nuclear reactor incident released under the ARS logo and name. We wish to be clear that this information has not originated from ARS and as such distance ourselves from any such misinformation.”

Fairfax sued for a bill. Reverberations continue among the halls of power over the latest WikiLeaks US cables releases. This time a group of Indonesians have declared they are going to sue the US Jakarta embassy and Fairfax’s The Age and The Sydney Morning Herald for the princely (and Dr Evil-esque) sum of $1 billion over the cables.

Citing Fairfax’s failure to provide adequate checks and balances on a Philip Dorling front-page scoop, which supposedly implicated President Susilo Bambang Yudhoyono in corruption, the State-Owned Enterprises Labour Union say the story has defamed Indonesia and that it has “ruined” their national pride.

In another moment we wish was caught on film, 60 people gathered around the US embassy to protest against The SMAge story by tearing copies of the papers apart before apparently throwing them in a bin marked “Junk Newspapers”. What a coincidence, we’ve got one of those bins here at Crikey. — Tom Cowie

Unfortunate ad placement #845. With the spread of radioactive fallout from the damaged Fukushima Daiichi nuclear power plant increasing by the day, it would seem insensitive for a newspaper to plug an upcoming uranium conference in its Japan disaster section. But that’s exactly what the Australian Financial Review decided to do on page 13 yesterday (and again today — albeit in a different section) with an ad for Paydirt’s upcoming 2010 Uranium Conference in Adelaide: 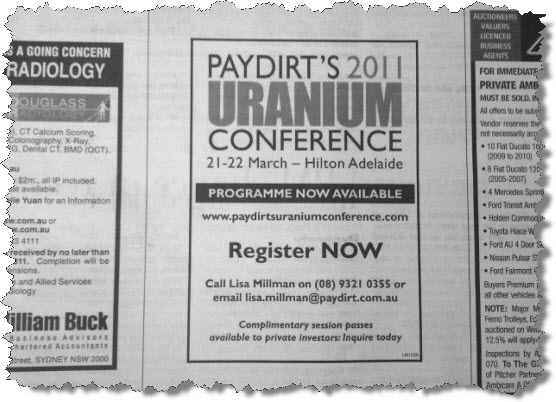 According to Paydirt’s website, “the uranium renaissance is here and Australia is in the prime position to benefit”.

“While the debate may continue to rage in Australia, for the rest of the world the nuclear question has been answered unanimously as a new generation of safe, dependable nuclear power reactors come online.”

The talented Mr Gillard. It’s hard to excuse The Age for getting the gender of the Australian Prime Minister wrong today on page seven: 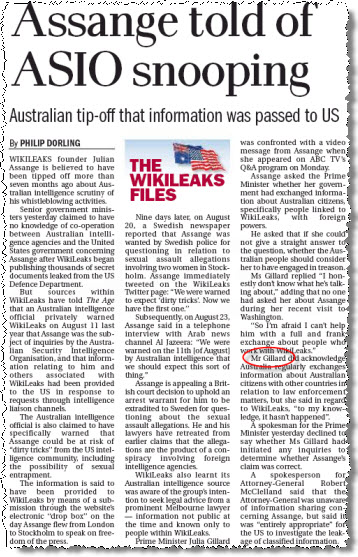 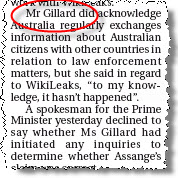 Semantics at Fairfax 2.0. There was only one lead story in town yesterday, but even still the two major Fairfax sister sites chose slightly different wording to report the same development: 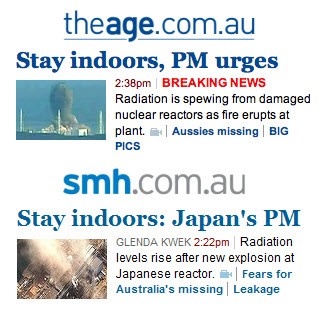 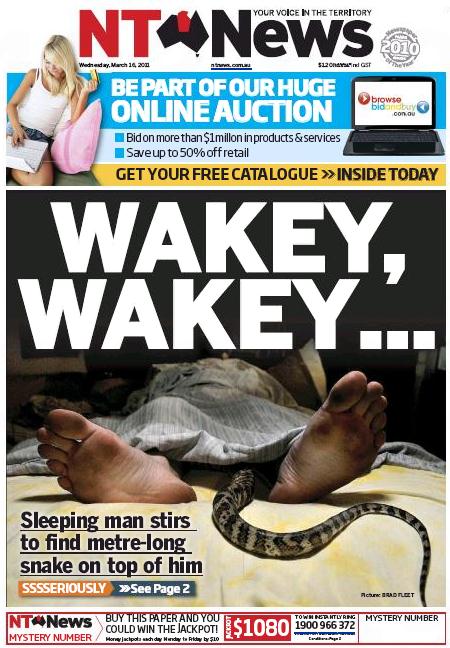 “CNN once again proved its appeal to viewers of breaking news last Friday through Monday night, with coverage of the aftermath of the Japanese earthquake and tsunami.” — New York Times

“iiNet proposed that since internet access is increasingly seen as a human right, these penalties should not include the total disconnection of an internet service. It used an analogy to back itself up, saying that a person found to have been caught speeding, say, once is not denied all access to transportation and proposed a similar system to that used for drivers where fines and demerit points are doled out to copyright infringers. Repeat offences may lead to the person’s access being temporarily restricted under the proposal.” — ZDNet

“Biz Stone, co-founder of Twitter, is to join the Huffington Post as the new media firm adds big names to its roster following its $315m (£196m) takeover by AOL.” — The Guardian

“A Northern Territory Supreme Court justice has withdrawn contempt of court charges against a publisher owned by News Limited.” — ABC

“We’re the big fans of the man who makes the world more open and connected. So we introduced the ‘Poking Inventor’ action figure. Everyone likes the social network, but we never thought Mr Mark Zuckerberg would be unhappy with the friendly toy, until we received an email from a Beijing law firm representing Facebook Inc. Yes, a law firm from China!” — M.I.C gadget

Ricki Lake poised for a 2012 comeback.

“Ricki Lake said she was interested in returning to day-time talk. She reiterated that when she appeared on ABC’s The View in February. Since then, things have progressed, with Twentieth, CBS and NBC all expressing interest in distributing such a show. Twentieth has even gone so far as to host at least one meeting between Lake and a potential broadcast client.” — Broadcasting & Cable

Some plain talking about nuclear lies

What a coincidence indeed Tom Cowie, I’ve got one of those junk folders for Crikey as well

Wow, that guy sure has a long snake.

So they left an “n” or two out of that trouser snake editorial lead – so who’s perfect?