With news dominated by the devastation in Japan, the Australian media again somehow managed to briefly turn it into another Kevin Rudd issue.

With news dominated by the devastation in Japan, the Australian media again somehow managed to briefly turn it into another Kevin Rudd issue when he was criticised for “demanding” answers from the Japanese Government on the state of its affected nuclear reactors, which has since become almost the sole focus of the coverage as the danger has increased. Rudd remains a figure of fascination for most of the political media, and while he’s no shrinking violet, he definitely hasn’t had to put on fishnets to keep the profile up.

No huge movers further down the list, although MySchool 2.0 pulled Peter Garrett into the list for the first time in a while, Tony Burke moves up on pulp mill and Tarkine debate, while Nick Xenophon can’t keep pace with Tony Windsor and Bill Shorten drops out of the top 20 altogether. We feel sure we won’t need to say that too many times. 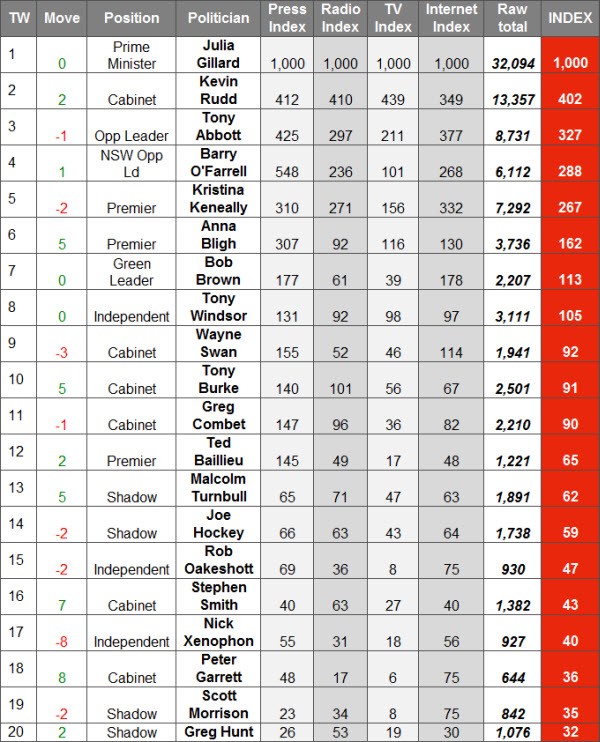 Julia Gillard still miles out in front in terms of discussion in talkbackland, with punters far more focused on the hip pocket than Muammar Gaddafi – what a shock. Meanwhile the Greens remain a favourite football on the right wing stations, Bob Brown taking 6th position.

20 radio items and 585 television. Mass is already niche for those who haven’t caught up.

iSentia index: one for the true Beliebers