An economic recovery not led by housing

Australian Bureau of Statistics figures for dwelling unit commencements give a seasonally adjusted estimate falling 5.3% in the December quarter which follows a fall of 13.0% in the September quarter.

Leaving space for the miners. It’s back to the trend line again and the trend continues downward. Australian Bureau of Statistics figures for dwelling unit commencements give a seasonally adjusted estimate falling 5.3% in the December quarter which follows a fall of 13.0% in the September quarter. This economic recovery is certainly not being housing led and that means there will be more space for the mining development not to result in short term interest rte increases.

Some sympathy for Karl. It’s a funny thing about politics that when you are the party machine man and run a losing election campaign you quickly become the person to blame. Yet when there is a great victory it is always the result of the good work of the parliamentary leader.

Karl Bitar, who announced his retirement today as Labor’s Federal Secretary, learned that the hard way. He has carried the can for the near defeat of last year yet it was the work of the parliamentary party in changing leaders that made his task an impossible one.

Out with the roses but in with the internet dating. The price of rose bushes and vet fees for spaying a kitten are out. Dating agency fees are in along with smart phones and the “apps” that run on them while it’s farewell to mobile phone downloads, such as ringtones and wallpaper. 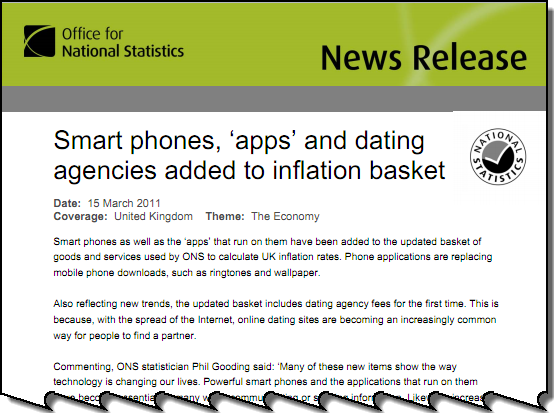 The UK’s Office of National Statistics has updated what gets measured in the country’s inflation figures. Says the ONS statistician Phil Gooding: ‘Many of these new items show the way technology is changing our lives.

Powerful smart phones and the applications that run on them have become essential for many when communicating or seeking information. Likewise, increasing numbers of people now seek a partner via internet dating sites.’

The weasel words of diplomacy. The Foreign Ministers of the G8 — representatives of the world’s most powerful nations with the exception of China — have met in Paris and considered what action to take about Libya. And the outcome? Well, read the chair’s official summary and see if you can work out what it means.

“Ministers endorsed the legitimate aspirations of the Libyan people for a future of democracy and prosperity. The Libyan people, like all peoples, have the right to choose their leadership openly and democratically. Ministers looked forward to welcoming a new Libya as a fully fledged partner of the international community and to establishing mutually beneficial relations.

Ministers welcomed the fact that the UNSC is considering, as a matter of urgency, a wide range of measures to ensure the protection of the Libyan population from attack by Muammar Gaddafi’s forces. In that context, Ministers welcomed the recent declaration by the League of Arab States, calling for a number of measures to protect and support the Libyan population. They stressed the importance of regional participation in any such efforts, and agreed to follow up urgently with the League of Arab States.

They also agreed that the UNSC should increase the pressure, including through economic measures, for Muammar Gaddafi to leave. Ministers also recalled the decisions of the African Union and the declarations of the Gulf Cooperation Council and the Organisation of the Islamic Conference and decided to coordinate closely with the regional organisations. Ministers welcomed the declaration adopted by the extraordinary European Council on 11 March.

They commended the adoption of Resolution S-15/1 by the UN Human Rights Council (UNHRC), and in particular the decision to urgently dispatch an independent, international commission of inquiry to investigate all alleged violations of international human rights law in Libya.

They welcomed all efforts already undertaken to provide humanitarian assistance to Libya and neighbouring countries. They commended the actions of the UNHCR and the World Food Programme in that regard. Ministers stand ready to support further humanitarian measures.

One thing all those words clearly do mean is that there was no agreement to actually do anything. The United Kingdom and France clearly failed in their attempt to get support for the imposition of a no-fly zone over the country. Resistance from Russia, Germany and the US prevented the proposal even being mentioned and with China also being opposed and having a veto on the UN Security Council, that is the end of that.

Which prompted Colonel Gaddafi to say in an interview that Germany, Russia and China would now be rewarded with business deals and oil contracts.

And the likelihood that Gaddafi will remain around to award such contracts is seen by the market makers as increasing. Here’s how the Intrade prices have developed: 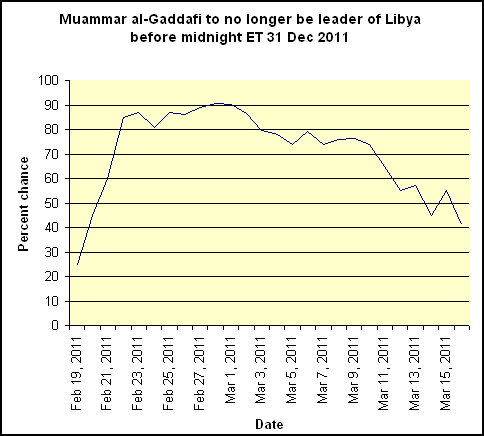 How will this recession affect the housing market in Australia?

The party hierarchy, including Federal Secretary, has no influence on how the party (mal)functions?

As the owner of a gorgeous, lovable, loyal, weazel (ferret) I object to speciesism! Besides, they don’t talk.

Scott – I am duly chastened.