The Greenland and Antarctic ice sheets are losing mass at an accelerating pace much sooner than model forecasts have predicted, writes Dr Andrew Glikson.

The ice sheets are losing a combined mass of 475 billion tonnes of ice per year on average — suggesting they are overtaking ice loss from Earth’s mountain glaciers and ice caps.

So what does this mean for rising sea levels?

Doubts are often raised among climate scientists whether the Greenland and West Antarctic ice sheets can survive the 1.8-4.0 degrees temperature rises projected by the IPCC-2007, leading to metres-scale sea level rise.

The increase in frequency of extreme weather events manifests a rise in the atmosphere/ocean energy level. Global temperature rise, ice melt and sea level rise lag behind the rise of GHG forcing of about ~2 Watt/m2 (see chart below).  The precise time scale of this lag remains unknown. 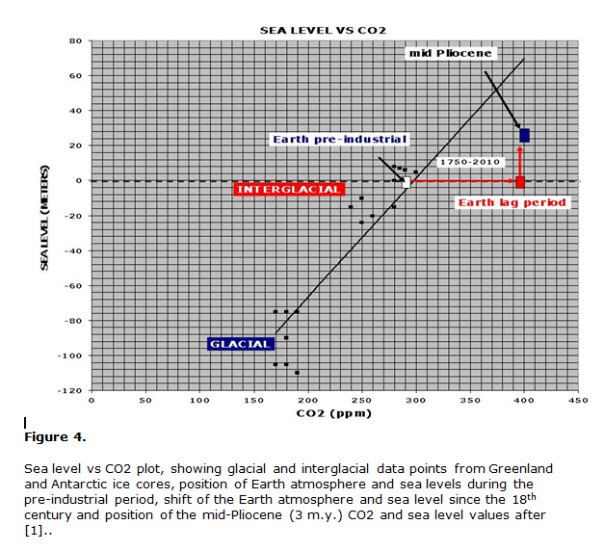 Earth climate is in uncharted territory.

The extreme rate of greenhouse gas forcing, rising at ~2 ppm CO2/year, leads potentially to tipping points such as high-rate methane release from permafrost and Arctic sediments, and the potential collapse of the North Atlantic Thermohaline Stream.

With the exception of massive volcanic events and asteroid impacts, no geological record exists for rises of greenhouse gases (GHG) (CO2, CH4, N2O) at rates as high as the rate of 1 to 2 ppm CO2/year since the second half of the 2oth century.

By distinction from Mars (Temperature -113 degrees to 0 degrees; thin atmosphere pressure of 0.01 Bar at surface; CO2 ~95.3%) or Venus (T~450 C ; 90 Bar at surface; atmosphere of CO2 & sulphuric acid), the modulation of Earth surface temperature by greenhouse gases (GHG) prevents its freezing to -18 degrees, thus allowing the presence of liquid water and thereby of life.

The connections between the level of GHG, troposphere temperatures, formation or melting of ice and therefore variations is sea level are in the core of climate science, including future climate projections. 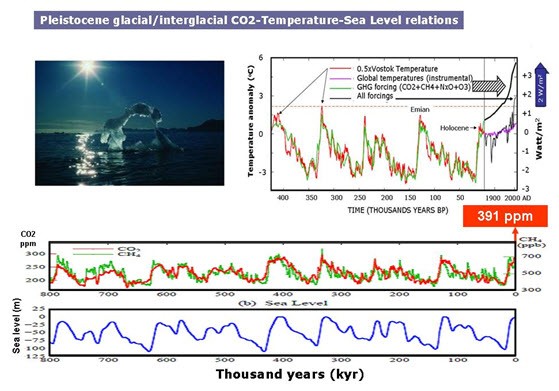 Changes in sea level (SL), consequent on the cumulative outcome of thermal expansion or contraction of water and the melting or freezing of ice sheets and mountain glaciers (in the long term SL is also affected by uplift or sinking of continents and ocean floor), represent a definitive measure of variations in Earth climate.

Temperature controlled variations in SL, from +75 metres to -120 metres relative to the present, have resulted in different global land-sea configurations, from flooded Cretaceous (145-65 million years-ago) continents to extended continental shelves during the Pleistocene (1.8-0 m.y.-ago) ice ages.

The measurement of past sea levels from ice core and sediment proxy data and of recent and present levels using tide gauges and laser ranging satellite, allows oceanographers to reconstruct past SL and near-past SL (see chart below), demonstrating close connections between atmospheric CO2 levels, temperatures and sea levels. 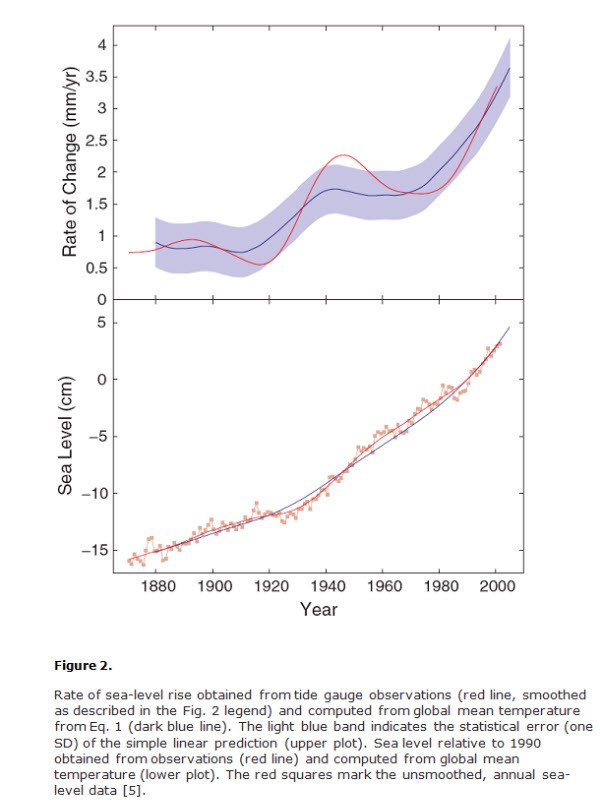 The data indicate an extreme development in the atmosphere-ocean-cryosphere system since the mid-18th century, including:

Attempts at estimating future melting of continental ice sheets and thus sea level rise vary between authors. The IPCC-2007 report suggests sea level rise in the range of 0.18-0.59 metre by 2100 but this is qualified by likely underestimate of contributions from ice sheet melt, as ice sheet physics were not understood well enough.

In an article titled “Scientific reticence and sea level rise” Hansen et al., 2007, stressing the non-linearity of ice melt processes, state: “as a physicist, I find it almost inconceivable that business-as-usual climate change would not yield a sea level change of the order of metres on the century timescale”.

Most recently Hansen and Sato [1], citing Velicogna, 1009, point to Gravity satellite evidence for a doubling time of about 10 years of Greenland and Antarctic ice melt rates (see chart below), implying the possibility of multi-metre sea level rise this century. 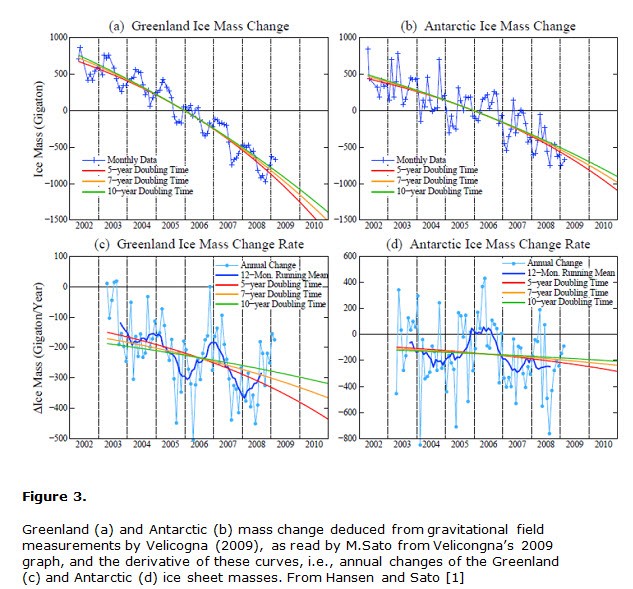 Note that most projections end by 2100, a time when our grandchildren and their children will be alive.

Ignoring (or including if you can) the effects of floating ice when it melts, what effect will 475 billion tonnes of ice have on global sea levels when it melts? I’m not trying to trivialise the claims, I just want to know how much we can expect to see sea levels rise if we lose 500 billion tonnes (or so) of ice per year for 100 years.

Shane, not sure about the annual rate but if both ice sheets completely melted we would see a sea level rise of about 70 metres.