McClelland in, Rudd out as Gillard changes emphasis

That there is something strange and a little strained in the relations between the camps of the Prime and Foreign ministers looked even more apparent last night.

A change of emphasis. That there is something strange and a little strained in the relations between the camps of the Prime and Foreign ministers looked even more apparent last night when the Attorney General Robert McClelland fronted up on the ABC’s 7.30 to talk about Australia’s dealings with Japan on the aftermath of the earthquake and the tsunami.

The Attorney might be on the national security committee of Cabinet, which apparently discussed the matter yesterday though who knows why, but if ever there was an issue for the Foreign Minister Kevin Rudd to handle then surely this was it.

Some good economic news from the OECD. There was good news on the economic front out of Paris overnight with the OECD reporting that its composite leading indicators (CLIs) for January 2011, designed to anticipate turning points in economic activity relative to trend, continue pointing to expansion in most OECD countries.

You show me yours before I’ll show you mine. There’s something rather childlike about the attitude of those politicians who argue that Australia should not take action to curb global warming until everyone else does. If every country took that view then nothing would ever happen. Yet the argument gets even worse than childish when it is constructed on lies and one of those is that major polluters like China and India are among those countries doing nothing.

Climate Change Minister Greg Combet has begun quoting the example of China doing much more to curb carbon dioxide emissions than Australia and he should add the story of India’s Environment Minister Jairam Ramesh to his repertoire. For Minister Ramesh, as Newsweek commented in a major article recently, has moved India’s position on combating climate change “by bounding leaps”:

“He dropped the country’s insistence that developing nations would take on significant efforts to curb greenhouse gases only if the industrialized world paid them to do so. Instead, he unilaterally committed India to limit its future carbon output, including new fuel-efficiency standards for cars and trucks, a green building code, and a mandate that 20 percent of India’s energy come from renewable sources by 2020, the same target to which the EU is now committed.

At Cancún he pledged India to reducing the carbon intensity of its economy. And while Ramesh is quick to point out that this is not the same as cutting the absolute level of India’s emissions — something he said India would not agree to — it does mean the country will have to make significant efforts to reduce its carbon output as its economy expands.”

Desperately needed: a nuclear expert to trust. I have been doing my best to understand what is going on at Japan’s crippled nuclear reactors without much success. The talking heads on television all seem to have a vested interest of either being staunch advocates or equally staunch opponents of nuclear power.

What I want to find is someone who will explain to me the risks involved in what is happening now rather than what the implications might be in the future – someone who can explain to me what the official releases from Japan’s Nuclear and Industrial Safety Agency actually mean.

Journalism losing control of the future. According to the Pew Research Center’s Project for Excellence in Journalism, a more fundamental challenge to journalism than the structural economic problems facing newspapers became clearer in the last year. The biggest issue ahead may not be lack of audience or even lack of new revenue experiments.

It may be that in the digital realm the news industry is no longer in control of its own future:

“News organizations — old and new — -still produce most of the content audiences consume. But each technological advance has added a new layer of complexity — and a new set of players — in connecting that content to consumers and advertisers.

In the digital space, the organizations that produce the news increasingly rely on independent networks to sell their ads. They depend on aggregators (such as Google) and social networks (such as Facebook) to bring them a substantial portion of their audience.

And now, as news consumption becomes more mobile, news companies must follow the rules of device makers (such as Apple) and software developers (Google again) to deliver their content. Each new platform often requires a new software program. And the new players take a share of the revenue and in many cases also control the audience data.”

The State of the News Media Report by the nonpolitical, nonpartisan research institute funded by The Pew Charitable Trusts, found that 2010 saw significant — even landmark — growth in internet advertising. For the first time, total online ad spending in 2010 outpaced newspaper print advertising. Search continues to dominate, accounting for nearly half of all online ad spending.

As in online ad spending, 2010 marked a milestone in web-based news consumption. For the first time, more Americans said they went online to get their news than said they read a newspaper “yesterday”. Television, though, still reigns as 58% of Americans reported getting some news from television “yesterday”, almost double online. 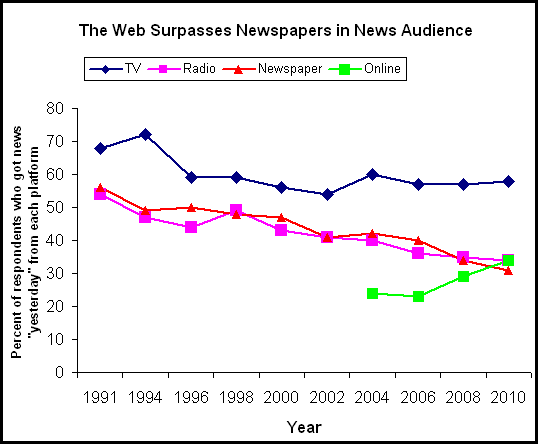 Re McClelland’s appearance: If you’d seen Rudd on New24 this morning and yesterday morning you’d have a better indication of why he let McClelland do the talking. The man looks absolutely stuffed. So I doubt the ‘change in emphasis’ theory has much legs … for now.

One of the good things about Rudd being tired is that he gets to the point a lot quicker and I thought he played with a pretty straight bat.