Staring down the geiger counter

As we go to press, a resident in Tokyo live streams their geiger counter and all eyes watch the radiation levels rise.

It has been quite surreal to observe ‘experts’ 10,000 kilometres away from the scene insisting there is no public danger from the dramatic events unfolding at the Fukushima Daiichi nuclear plants, while the nuclear authorities on the spot ordered the immediate evacuation of more than 200,000 residents, began the distribution of iodine tablets — given to minimise the threat of thyroid cancer — and recommended those that remained within a 20-kilometre radius of the plant close their windows and cover their heads in wet towels.

At 11.50 am NHK was reporting government officials as saying ‘a low level of harm to human life’  is occurring in the vicinity of the Fukushima Daiichi nuclear plant where all three active reactors have now suffered explosions.

This morning’s explosion in the No 2 reactor is however different. The radiation level outside the complex has been recorded as being eight times in excess of the annual safe limit for human exposure every hour.

Reports of a serious rise in radiation levels at Ibaraki, halfway between Fukishima and Tokyo have appeared in the national media.

While something may have been lost in translation, the government health officials quoted by NHK appear to be confirming human harm, but only ‘small’ harm.

Our rolling wrap chronicles this exchange:

TimeOut Tokyo magazine are tweeting (in English) what’s happening on Tokyo’s government news channel, NHK. They tweeted the conference by Tokyo Electric Power Co (TEPCO) announcing the latest explosion, noting how difficult it was to get information and how frustrated journalists were finding it:

@TimeOutTokyo: TEPCO seems at an embarrassing loss for answers. All are just sitting silently, as though they can’t hear the questions.

@TimeOutTokyo: Basically, NISA has said that the explosion is to do with the suppression pool, but TEPCO are being reluctant and hazy about confirming.

@TimeOutTokyo: NHK cuts back to studio. Anchor says, “Well, basically we learnt nothing new there.”

@TimeOutTokyo: PM Kan admits that he saw the explosion on TV, but nobody informed him officially for an hour. He tells TEPCO: Pull yourselves together (NHK)

And as we go to press, a resident in Tokyo live streams their geiger counter and all eyes watch the radiation levels rise: 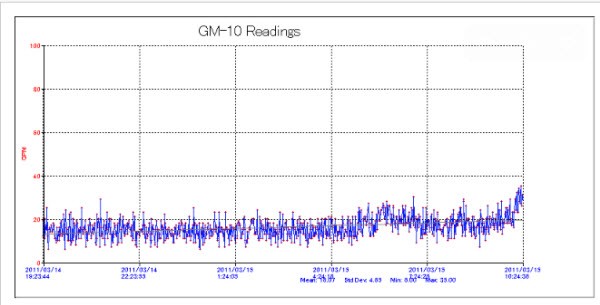 Nothing lost in translation there.

With 60 days to go until the Tokyo Olympics, here are the key numbers

Hope the cloud goes right over Ziggy’s backyard. He can then know what it feels like to desperately guzzle iodine for two weeks as I had to when Chernobyl blew.

Even after listening to some well informed experts and doing some reading (I’d suggest the author of the above try it!), it’s pretty obvious that background radiation levels vary enormously and that humans can be exposed to many multiples of “normal” levels without consequence. So that squiggly line has not even managed to double in 24hrs.

Just imagine if it had gone up by 200 times! Yep, and guess what? It would still not be necessarily be of any health consequence. In fact one population of people live in an area of such naturally ‘high’ background levels and live long healthy lives.

How about getting some perspective rather than throwing up a wiggly line with no supporting evidence?

The highest levels of natural background radiation recorded in the world is from areas around Ramsar, particularly at Talesh-Mahalleh which is a very high background radiation area (VHBRA) having an effective dose equivalent several times in excess of ICRP-recommended radiation dose limits for radiation workers and up to 200 times greater than normal background levels. Most of the radiation in the area is due to dissolved radium-226 in water of hot springs along with smaller amounts of uranium and thorium due to travertine deposits. There are more than nine hot springs in the area with different concentrations of radioisotopes, and these are used as spas by locals and tourists.[10] This high level of radiation does not seem to have caused ill effects on the residents of the area and even possibly has made them slightly more radioresistant, which is puzzling and has been called “radiation paradox”. It has also been reported that residents have healthier and longer lives.

…so could we please have more information and less ill-informed hysteria? Or is it just OK to be ‘for’ science when it’s about AGW and totally unscientific when it’s about radiation?

Well, staring down the geiger counter:

Radiation levels in Tokyo were twice the usual level on Tuesday but was too negligible to pose a health threat — 0.809 microsieverts per hour, the Tokyo Metropolitan Government said. (CNN)

…does that need translating?

Am I right in thinking the geiger counter has gone up about 40 to 50% higher in a day, and from a very low base? That looks significant to me for so far away in Tokyo.

Also the problem is knowing what is around and shielding the counter, or indeed loading it up.