PM’s office unhappy with Bono comparison. Government advisers have a spring in their step after Julia Gillard’s well-received US trip. But at a barbecue for Canberra staff on Saturday there was a lot of talk on the PM’s speech to Congress, which Fairfax writer Tony Wright described as “something approaching plagiarism” in allegedly stealing lines about the moon […]

PM’s office unhappy with Bono comparison. Government advisers have a spring in their step after Julia Gillard’s well-received US trip. But at a barbecue for Canberra staff on Saturday there was a lot of talk on the PM’s speech to Congress, which Fairfax writer Tony Wright described as “something approaching plagiarism” in allegedly stealing lines about the moon landing from U2 singer Bono and a renowned US policy book. The PM’s office was not impressed and the speech writer put on notice.

Ten misses the boat on earthquake. Seven and Nine newsroom gossip is fascinated with the heap that Ten’s news expansion seems to have fallen into. When the incredible live aerial pics started rolling in at 5.50pm on Friday evening, it was thought that as the only commercial news on air at that time it would give Ten the running on the story.People would start watching these pics, be captivated and stay on Ten. But they kept with their rundown and five-minute weather report. Thanks! It gave Seven and Nine ownership of the story.

Operatives are agog that Ten could ignore the probably once in 20 or 30-year pictures. So, at least 6pm with George Negus started on the story. But for anyone watching, wait, what’s this? George already having another Friday night off just two months into the show?

Other networks are impressed with Ten’s new recruit Hamish Macdonald (and George’s fill-in). But how impressed does George want everyone to get with him? If you’re not around for the big stories, it means you’ve got the young-uns like this snapping at your heels. So, for the extra $20 million and all the extra staff, how could they miss these amazing live pics? Wonder what Lachlan thinks?

Labor man going Greene. Kevin Green(e) is a Labor Party candidate. Not that you’d know it from his election material… 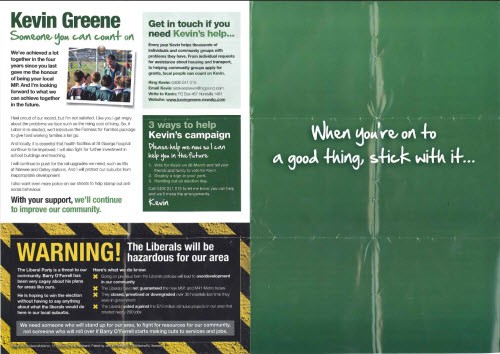 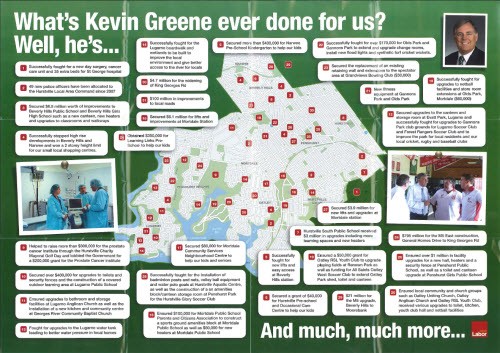 Newman singles out his women. International Women’s Day celebrations were lovely this year. In Brisbane I attended a breakfast at the Convention Centre. One of the best things about the day is the way it truly unties everyone — all sides of politics, the corporate and not-for-profit sectors in a celebration of the immense ground that has been covered by women for women.

Apparently, Brisbane mayor Campbell Newman didn’t get that memo. When called to the stage to give his speech he chose to campaign for the women in his caucus. While he noted their admirable work during the flood crisis his focus on Brisbane when most of the state was affected and his less than subtle electioneering had more than a few women — from all sectors — looking around at each other bemused.

It’s not even an election year!

Jones, Flint celebrate the Commonwealth. The organisers of today’s Commonwealth Day Celebrations at NSW Parliament House must have an eye for irony. It’s the only explanation for their decision to have given both Alan Jones and David Flint official roles at the event. Unless it was an informed choice to help reinforce the appeal of their brand by showing off great role models for the young…

Young Libs trying to engage more women in the conservative cause

Everyone loves a winner