Crikey media wrap: Japan is struggling to cope after a devastating 8.9 magnitude earthquake struck off the north-west coast on Friday, causing a tsunami up to ten metres tall and travelling kilometres inland.

Japan is struggling to cope after a devastating 9.0 magnitude earthquake struck off the north-west coast on Friday, causing a tsunami up to ten metres tall and travelling kilometres inland.

The toll is heartbreaking: the number of dead could exceed 10,000, in the Miyagi province alone, with 1000 bodies already found. In Sendai, one of the hardest-hit towns, several hundred bodies washed up on the beach. Tens of thousands are missing. Shortages of food, water and heating are affecting those who have survived. Nearly 400,000 people are homeless. The Fukushima nuclear power plant is at risk of meltdown — and being flooded with sea water in an attempt to prevent it — while the Onagawa plant is now leaking radiation, forcing 180,000 to evacuate the areas at risk of radiation. Terrifying aftershocks continue regularly.

The earthquake was so powerful that it moved the main island of Japan 2.4 metres and shifted the earth’s axis by 10 centimetres.

For many who lived near the coast, the wave of disaster was relentless: a damaging earthquake, followed by a tsunami, then fires and risk of radiation. “The current situation of the earthquake, tsunami and the nuclear plants is in a way the most severe crisis in the past 65 years since World War II,” declared Japan’s prime minister Naoto Kan.

The aftershocks could get even worse, reports The Guardian: “The country’s meteorological agency has warned that there is a 70% possibility of a tremor of magnitude 7 or higher in the next three days, and a 50% risk in subsequent days.”

The economic impact — to the world’s third-largest economy and regional and global markets — will be significant. The factories of Toyota, Nissan, Sony, Nestle, Kirin Holdings, Fuji Heavy Industries and Honda — amongst others — have halted production. An emergency “quake budget” will be announced today by the Bank of Japan, with The Guardian reporting:

“Analysts said one of the Bank of Japan’s priorities was to advance ‘soft’ loans to commercial banks to make sure they do not run out of cash as customers in the affected areas rush to withdraw savings. The central bank is expected to flood money markets with more cash than usual, partly to stop the yen from rising too much. Japanese firms and investors are racing to repatriate their assets, selling dollars and other foreign currencies, to prepare for the cost of rebuilding their domestic economy, which will push up the yen’s value. It is feared this will make exports more expensive and choke off the hoped-for, export-led recovery.”

Being situated on earthquake-prone fault lines, quakes have long been a tradition of life in Japan and the quality of its building and engineering reflects this. But the sea walls built to withstand a tsunami were not high enough. The New York Times explains:

“At least 40 percent of Japan’s 22,000-mile coastline is lined with concrete seawalls, breakwaters or other structures meant to protect the country against high waves, typhoons or even tsunamis… Peter Yanev, one of the world’s best-known consultants on designing nuclear plants to withstand earthquakes, said the seawalls at the Japanese plants could not handle tsunami waves of the height that struck them. But the diesel generators were situated in a low spot on the assumption that the walls were high enough to protect against any likely tsunami.

“That turned out to be a fatal miscalculation. The tsunami walls either should have been built higher, or the generators should have been place on higher ground to withstand potential flooding, he said. Increasing the height of tsunami walls, he said, is the obvious answer in the immediate term.”

Google has quickly put together a crisis response page, with detailed current information including the latest news and updates of flights and public transport in Japan, message boards searching for victims and maps. And for an understanding of where this disaster is unfolding geographically, check out this interactive map from The Guardian… 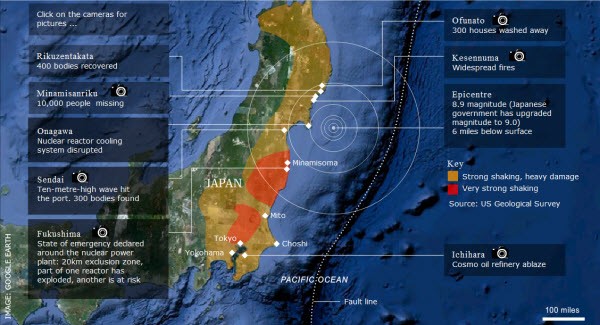 Historically, how does this earthquake compare with others? While this report from Munich Re doesn’t include last week’s quake, it does offer a historical perspective of other similar disasters. Preliminary costings say the latest quake could be the most expensive earthquake ever and cost US$100 billion. 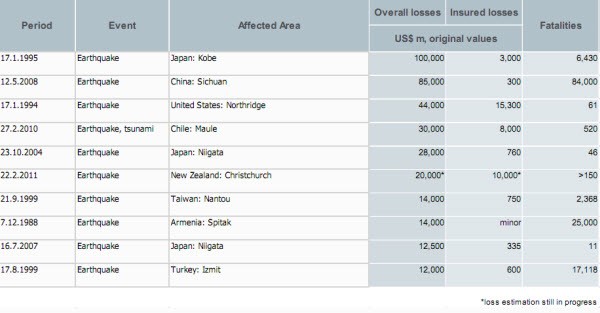 Several amazing first-person accounts are now emerging of what the disaster was like. A geophysicist at the University of Tokyo, Robert Geller explained both his personal and scientific experience for New Scientist:

“When the earthquake struck at about 3:00 pm on Friday March 11 (Japan Standard Time), I was in my office on the seventh floor of the School of Science Building of the University of Tokyo, typing away on my notebook PC. Moderate-sized quakes are not uncommon in Tokyo, so I kept on typing for a while, ignoring the shaking.

“However, as a seismologist, I immediately recognised that the amplitude of the seismic waves was large, but that the shaking was relatively long-period, with an almost complete absence of the sharp jolts that characterize nearby quakes. (This is because the earth gradually absorbs seismic waves as they travel, and shorter period waves are absorbed over a smaller distance range.) Because I could quickly identify this as a large, relatively distant quake, I didn’t worry too much. Even so, as the shaking continued, I ducked under my desk for a while to guard against papers and books falling on my head from the cabinets behind me (in the event almost nothing fell out).”

“The earthquake struck while I was inside drinking coffee in Akihabara, a major electronics district of Tokyo.

“My inner ear registered dizziness before it set in. Then, like a plane hitting turbulence, the world moved separately from my body with force. Strangest was the sound of buildings effectively moving on hinges; it sounded like the slow opening of a tin can. Light fixtures swung for two and a half minutes, people froze. We asked locals what to do: stay put. Young and old, those around us were shocked. Some stood under door-frames. Within seconds, mobile networks failed.”

Before and after satellite photos at The NY Times of the destroyed landscape reveal the the sheer number of completely destroyed neighbourhoods. 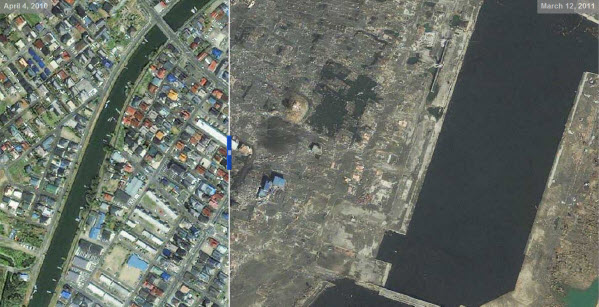 As always, the Boston Globe offers an incredible photo gallery of events, including images of citizens floating down streets, ships upturned in the middle of cities and young children undergoing radiation inspections. The Atlantic also has a brilliant photo gallery showing the aftermath. Robert Gilhooly, a UK-born, Japan-based freelance photo-journalist, is uploading incredible photos to his own website, showing citizens waiting in shelters and trying to evacuate.

Newspapers around the globe are covering this disaster in great detail, particular the fears of a nuclear meltdown…

Journalists from around the globe are now rushing to Japan to cover the tragedy. Channel Nine reporter Tom Steinfort tweeted a look at the equipment the A Current Affair team were carrying on the Japanese subway, before later announcing aftershocks were hitting every 30 minutes in Sendai. ABC News journalist Diane Sawyer posted a picture on Facebook of the iodine pills and radiation detector badge she’s got packed in her luggage as she too heads off to Sendai… 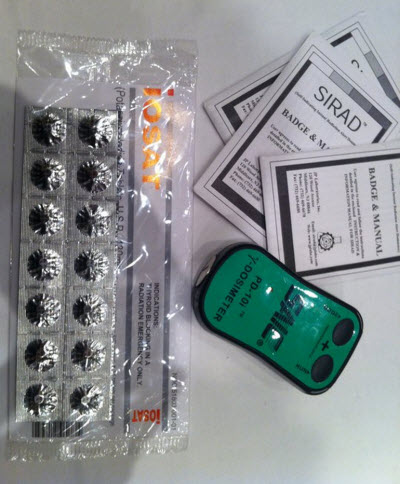 with the island moving

do all land title boundaries have to be resurveyed